Probably many of you have, by now, read Call the Midwife by Jennifer Worth, or seen the BBC series based on the book and two follow-ups.  Those of you who have not have the most marvelous summer treat in store!

The story is autobiographical, with most names changed to protect the privacy of people Worth hadn't kept in touch with in the 50 years since the story's setting.  And that setting?  It's Worth's foray into midwifery in the tough slums of London's East End in the 1950s and early 60s!  Yes!  This is Betty's world, replete with caps and cloaks, Cockney accents and bicycles.

The first book contains a lot less romance (the author fled a doomed love affair, in her mid-teens, to learn nursing in a West End hospital, and doesn't care to discuss it) and a whole lot more gynecological detail than a Betty novel.  There are also heartbreaking stories of poor people abandoned to horror by a system without safety nets.  Worth doesn't shrink from the sorrow and horror, but keeps a stiff upper lip and soldiers on, calling in the chiropodist to deal with toenails untrimmed for decades, befriending a young prostitute and trusting a mother of 25(!) to deal with a premature baby successfully.  There's also a skinnydipping interlude in literal Brighton, but other than constant babies, no mention of metaphorical Brighton.

I've only seen two episodes of the show, one from the middle and one toward the end, but I get the impression romance figures more largely in the film version than the printed.  And oh, the costumes!  The hairdos!  The meals!

Must dash to library and attempt to wrestle volumes two and three (Shadows of the Workhouse and Farewell to the East End) from what is most likely a long list of requestees.  So maybe the bookstore... 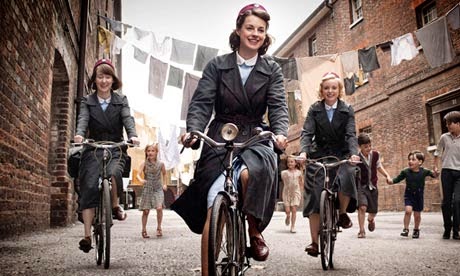 Posted by Betty van den Betsy at 7:20 AM