Betty on the Brain

I once heard a story about a man who worked as a janitor on a night-shift for a large office building and the tedium was difficult so he invented a game for himself. In his away-from-work life he enjoyed fly fishing and spotting a trout in a stream so he migrated this skill to the office and, as he cleaned, he'd be on the lookout for unrecycled cans of pop (In Huis VanVoorhees, the Professor grew up saying soda and I grew up saying pop and every time I slip and say soda it feels like I'm surrendering my sacred honor...so I write pop.) that he could 'fish' out of the trash and redeem.

I find myself doing that with Betty Neels.

Yesterday, we returned home but stopped at the High Desert Museum (which was really wonderful). As I was wandering around the exhibits, Betty Neels was in the back of my mind as I went. I found all sorts of little links to The Canon. 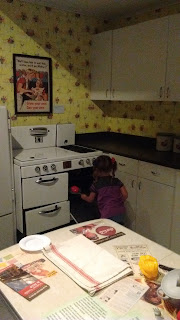 There was an exhibit about Interior Western States contributions to the WWII effort. For instance, I found out that the Hanford Nuclear Site was integral to the development of nuclear weapons and that the need for secrecy was so great that the nearby town was entirely made up of employees and their families and that the police had a key to every single house in town. Shudder. Anyway, the exhibit included a replica of a war-era kitchen and Pledge Five went to town with all the play food. It reminded me of cottage kitchens in The Canon. The range above looks like a low-rent version of an Aga and I imagine that Florina is keeping Sir William's daughter happy at the table, rolling out her piece of dough with grubby hands. 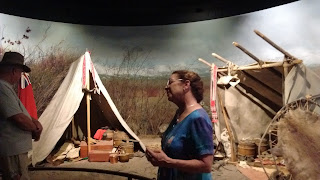 Susannah Lightfoot, red-headed docent from The Chain of Destiny, was on my mind as this red-headed lady took us around the Oregon Trail displays. Here, she is standing in front of the Hudson's Bay Company exhibit, speaking excitedly about beaver pelts and top hats. I hope that someone swoops down from his vast height to kiss her from time to time.

Cowboy art and pictures made up the displays in one hall and I saw a quote that I liked quite well:

"I come into the peace of wild things who do not tax their lives with forethought of grief...For a time I rest in the grace of the world and am free" --Wendell Berry

Often, our heroes and heroines are off tramping into the teeth of a fine gale to clear their minds. The Great Betty seems very approving of long walks.

This is a bead bag from the Indian Peoples of the Columbia Plateau exhibit and it was so exquisite that it reminded me of the 'bits and pieces' that Arabella of Dearest Love is able to save from the foreclosure of her family home. (A tea chest, old damask curtains, chenille tablecloth, Coalport china, a Worcester teapot, a silver pepperpot and salt cellar, and the Waterford crystal jug.) Of course, the work is so fine that it also reminded me of heroines in The Canon who take up needlework to pass the time and vent their frustrations about being married but not MARRIED-married.

Does anyone else go along making these Betty connections...on the fly, as it were? We should have a name for this game. Suggest yours in the comments!
Posted by Keira at 9:32 AM