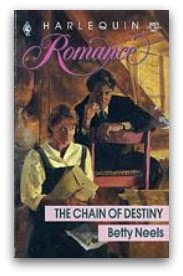 I love the name Susannah Lightfoot but I'm less in love with this book in totality.  I never really feel like the hero and heroine get on the same page and all the rescuing feels unexciting rather then providing dramatic peaks.  So, I'm with Betty Debbie on this one.  It's just okay.  It won't be making it into my luggage for the Epic Van Voorhees Mountain States Road Trip.
Love and lardy cakes!
Betty Keira

It's a lot easier to write a review for a book that you loathe, than it is to write about one that is just "okay". So...apologies ahead of time. I find The Chain of Destiny to be inoffensive...Suzannah can pretty much give as good as she gets (which I like)...but she really doesn't get enough material to work with.

Suzannah Lightfoot, 22 year old redhead, has a part-time job as a house guide. She shepherds tour groups around Sir William's stately home as a way of staying close to her aunt and helping the household budget (after losing both parents in a motoring accident she has been living with the aunt). Don't get too attached to the aunt - she kicks the bucket fairly early on in the story. Suzannah meets our hero while house guiding...she thinks the large stranger is lost from a tour group and thus shoos him away from the private part of the house.


Auntie is not feeling quite the thing...which worries Suzannah. The pesky inoperable brain tumor that Auntie doesn't know she has, is finally taking it's toll. Gosh, where's a brain surgeon when you need one? Staying with the local doctor, that's where. Professor Guy Bowers-Bentinck turns out to be the handsome straggling stranger from the house tour...but even his awesome brain surgeon skills are to no avail when it comes to saving Auntie. Enter Phoebe. Niece to Sir William (he of the stately home). Besides having a go for the Professor, she also takes it upon hers 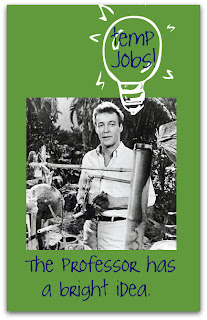 elf to evict Suzannah and give her notice as to her job. That would make Suzannah a)homeless b) jobless c) alone in the world. Yep, Phoebe's a peach. Suzannah walks out of her interview with a face like skimmed milk. The Professor sees her and That Face starts popping up in his thoughts - with increasing regularity. For some reason, he feels compelled to help her.


And thus begins Professor Bowers-Bentinck's career as a one man temp agency. A temp agency devoted to finding gainful employment for Suzannah.


Job 1: Archiver
Sorting trunks of family papers for two old ladies...zzzzz...huh? The job is ideal for her, as it comes complete with pet-friendly flatlet. Did I mention she has a cat named Horace? Yes, Suzannah is one of "those" people. A pet person. The Prof. stops by occasionally to swap compliments with Suzannah.
Him: Well, well, this is a pleasant surprise.
Her: A surprise...I don't know about it being pleasant.
Him: How outspoken of you...I should be flattered you remember me.
Her: I'd be silly if I didn't - you're vast, you must know you're good-looking; and you're here to see your aunt.
Him: Such an abundance of compliments.
Her: They're not meant to be, just facts.
Of course, this job is just temporary...as soon as the trunks are sorted and cataloged, it's time for the Prof. to find another job for her. The next one is in...wait for it...Holland!


Job 2: Keeper
Julie van Dijl is a post-surgical patient of the Professor's. After having a spot of brain surgery she doesn't need a nurse, just a keeper. Prof. B-hyphenated-B sweetens the pot by inferring that Suzannah is reliable, dependable and "what is that other virtue? - sensible?" 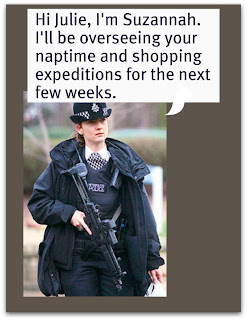 Him: Sorry, I put that badly...I intended nothing personal.
Her(kindly): I don't expect you did, but you should be more careful when you are talking to girls like me.

Him: Huh??
Her: I'm no beauty, I've no money, no job and the future's a bit vague; I don't want to be reminded of any of those things...It was nice of you to offer me a job, but I can't take it.
Yeah, she turns him down. There's no way she can take a job in Holland! What would become of Horace the Cat? Prof. B-B will cat-sit, that's what. The job is just about what she expects - Julie is a spoiled rich girl who expects the world to fall at her feet. Julie is not deliberately mean to Suzannah or deliberately nice. All in all, it's a job. She does have one nice day. The professor takes Suzannah on the Tour de Holland. In his great socking Bentley. He tries to get Suzannah to tell him what her future plans are...SCREECH! That's the sound of Suzannah putting on the brakes. She's just fine, thank you. She has no need of the Professor Bowers-Bentinck Employment Agency! Guy (That's what I'm going to call him, deal), drives Sue (That's what I'm going to call her. Deal again) back to England, puts her up at his house and kisses her. Huh?? Time to disappear. Editors Note: Betty Keira would like to make much more of this particular "flight". She'd like to think that Suzannah was in love at this point, which was why she couldn't accept help from Guy. I'm not sold on that theory. Suzannah doesn't show any symptoms of love...yet. We could spend hours analyzing her motives...but let's not.


Job 3: Daycare Worker
Sue finds a subsistence wage job working at a day-care center. The job comes with a basement flatlet, so Horace can come with. Meanwhile Guy is annoyed at not knowing her whereabouts. And annoyed with himself for spending too much time thinking about her. The job is hard work - especially the post-holiday days wherein she spends a good deal of the day cleaning up puke. Nice. Guy spots our girl while she's out with the tykes...he tracks her down to the daycare so as to check up on her. I'm fine, just fine. No, I'm not lonely...I have Horace to keep me company. So Guy leaves and Sue decides that she kind of likes him - he's not all bad. Time for a little drama. T 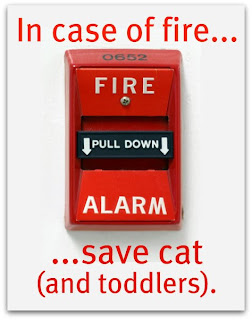 he daycare catches fire and girlfriend is a bona fide heroine...rescuing a toddler and his teddy bear from fiery death. And Horace. Unfortunately she is injured in the process - her hand is burned. So are all her belongings...except Horace. Guy sees her in the hospital, swears quietly, uses his brain surgeon skills to bandage her hand and takes her back to his house. Don't worry, Cobb and Mrs. Cobb are there. Mrs. Cobb helps her bathe and tucks her up for the night. Guy drugs her 1am cocoa...so she can sleep again. Mrs. Cobb is pretty sure that the Professor is sweet on Suzannah, and Mrs. Cobb likes her. Which is a good thing, since Mrs. Cobb is the person who gets to buy Sue a new wardrobe (with instructions from the professor not to buy anything brown or grey). Sue is not happy to take the clothes - but Mrs. Cobb reminds her that she owns nothing. NOTHING. Not a stitch of her clothing made it through the fire, and she certainly can't leave "mother-naked" (thank you Betty). Guy sends Sue off to his aunts while she recuperates. They're happy to have her and she's happy enough to stay for a very short while...but Sue has a problem. She'd like to be able to get a job, but she doesn't have a two penny pieces to rub together - she can't afford to ride a bus, make a phone call, buy stamps, etc....Guy stops by and the first words out of her mouth are "Would you lend me a pound?"
I'd like a round of Dawning Realizations...
Guy invites Sue to visit his ancestral birthplace with him, she doesn't care what 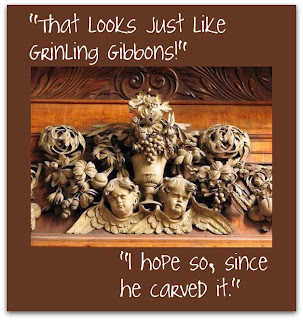 it's like, it could be a "two-up and two-down with no mod. cons." and she'd like it if he was there. Of course it's much fancier than that - it comes complete with wood carving over the fireplace and two old donkeys in the paddock. It's too bad Sue doesn't realize that an invite like this is tantamount to a public declaration of love in Neeldom. If she'd known that, she might not have allowed herself to be taken in by the lies, wicked lies, told by Phoebe, the big Phat Liar. Even though Phoebe hasn't made much of an appearance lately, she stops by and lies like a rug. According to her, she and Guy will be getting married soon, and they'd be happy to give Sue a job working for them in some menial capacity. Which leads to (after Horace ripping Phoebe's tights):


Job 4: Nanny
Sue just has to leave...and get far, far away. Her "flight" instinct is way stronger than "fight". She jumps temp. agencies and finds a job on the community message board. Horace is parked with an old friend and Sue heads off to the wilds of Yorkshire as a fill-in nanny for a family with three kids and a mother who is describes as "airy-fairy" *snort*. Guy tracks her down, and they kiss in the drizzling rain. The end.
Verdict: Suzannah is an okay heroine...sort of the archetype of the red-headed Neels orphan. In the rare scenes that she shares with Guy they have chemistry. Early on, Sue seems almost like a scientist cocki 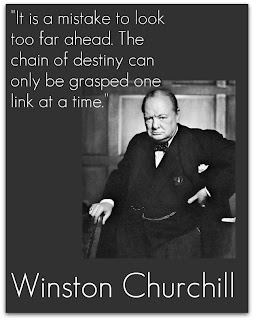 ng her head to the side as she observes a petri-dish...interested, but not emotionally involved. It's cute. I think the main problem is that there are far too few pages where the protagonists get to interact. Guy is an okay hero...but more than a bit two-dimensional. We do get glimpses of his growing interest...but the glimpses are just that - glimpses. I would have liked a few full on stares. I'm going to rate this somewhere between treacle tart and mince pies. On a side note, I would like to know what, if any, significance there is to the title "The Chain of Destiny". There are several other books out there with the same name and even a short story by Bram Stoker. Plus a quote by Winston Churchill...who was quite possibly quoting some other source. Help. Anyone?
Food: croissants, kas broodje, crumpets, smoked eel on toast, roast pheasant and red cabbage, paper thin pancakes with syrup, salmon in lobster sauce, caviar, cheese souffles, steak and kidney pudding, bread and butter pudding.
Fashion: fine green wool fabric for a skirt - which she HAND SEWS, very plain silk jersey dress in pewter grey, checked cotton blouse with plain dark skirt, Julie buys a gold-tissue dress with roses (can anyone picture this looking good?), blue-grey crepe with a discreet neckline, threadbare brown coat, passable gloves and handbag.
Posted by Keira at 8:42 AM