Betty in the Wild

I've been gone for the entire week - being the camp cook for 125 teenage girls and 20 adults.  Lucky for me everything tastes better outdoors.  It was exhausting, but Betty Tia came along with me for the fun of it (and by fun, I mean cooking over a propane stove, sleeping in a tent and an inordinate amount of heavy lifting...). I like Betty Mary's idea of a few days away from home a whole lot better.
-Betty Debbie
via email from Betty Mary:
Two Days in Paradise 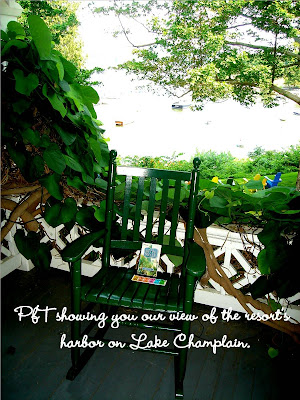 Professor Vue der Plane and I just spent 4 days on an anniversary road trip. We had a marvelous time, two days and one night of which was like living a dream. I found an internet deal that gave us a night in a lodge at a resort on Lake Champlain. It included a full breakfast served by gloved waitstaff, a 6 course dinner on the pier overlooking the water, a boat tour of the lake, and a bottle of wine, all for one extremely reasonable price. We kicked ourselves for not getting two nights, because just the cost of one night additional would have been twice what we paid for all the above.
I took along 'Paradise for Two', and released it for bookcrossing outside our lovely room. The other days were very enjoyable too. We started y driving through Canada and stayed the first night on the Niagara River. After the resort we stayed in 'regular' lodging near Lake George and I enjoyed a morning hiking from beach to beach. That night we stopped by Betty Ariel's in laws in Western N. Y. and had wonderful dinner on top of a mountain in a place that reminded me of a resort for backwoods people! Our last night was with brother-in-law near Cleveland, Ohio. We had a good visit with this charming but a bit lonely older guy, making me wish I had someone to introduce him too. He's been a widow 9 years and I think he needs a nice friend. All in all a wonderful experience. I can't wait for Anniversary 33! This vacation gets Lashed with whipped cream. Oooo I should have thought of that while in the room! 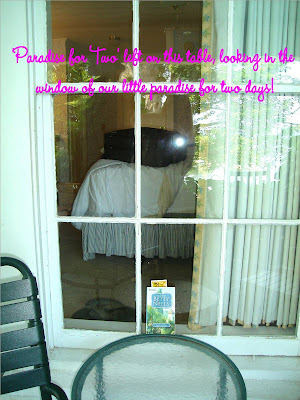 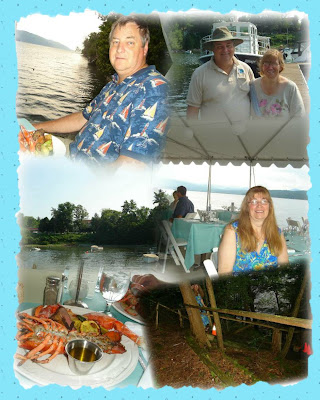 Collage note: Of course, I took my own UJD, and like a true Betty, scaled treacherous paths, note the orange cones that I ignored. I didn't bother waiting to be rescued! The Professor was not amused!  Note the boat was named the Escape! And for those non-Bettys who wonder why I'd include the dinner pic, well they may never understand!

Wedding photo note: Yes, he and my brother wore baby blue. It wasn't just that it was 1979. He wanted to honor the Virgin Mary, since she got us together. Blue is her color. 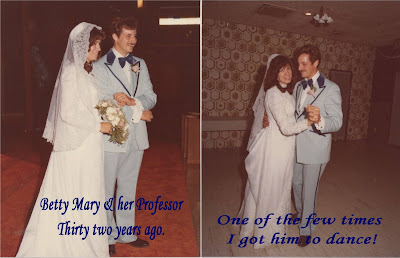 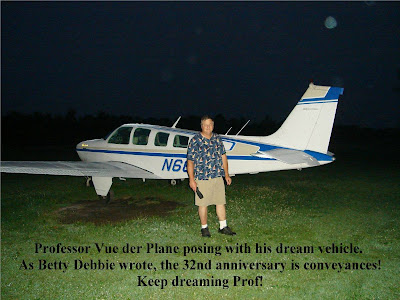