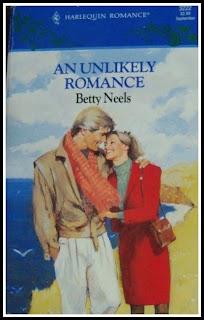 I've always been bemused by the hero in this one.  Not only is he terribly fashion-forward (See strangely cut leather jacket, white slacks and tangerine scarf on cover...) but his name, Krijn, reminds me, for whatever reason, of the Balrog in The Lord of the Rings.  Not that he himself would be a demonic creature inhabiting the bowels of the earth...just that he might be near enough neighbors to borrow cups of sugar...
Love and lardy cakes, Betty Keira

I remember exactly when and where I bought An Unlikely Romance...I usually don't. My family was on our way to Yellowstone National Park, and we wandered into a Deseret Industries thrift store in Rexburg, Idaho. When I read the hero's name on the back cover I knew that this was a book I didn't already own. Krijn van der Brink-Schaaksa. Yeah, that's a name I'll remember...even if I can't pronounce it.

Beatrice Doveton is 23, small, nicely plump (the Araminta). An orphan who lives with her fraternal uncle, his wife and their daughter Margaret...who is slightly older and much prettier. Beatrice is unfortunately called "Trixie" by them...and everyone else. Beatrice (I refuse to use the name Trixie again - the Professor also refuses to call her Trixie) is a second year nursing student at Timothy's. She is described as having the kindest of hearts, a romantic nature and a good deal of common sense. She is also a bit of a klutz. When Professor Krijn van der Brink-Schaaksma (!!?!) comes onto the ward for rounds, she falls for him...or rather, she falls near him. He picks her up and dusts her off without apparently noticing her. Beatrice likes Professor van der Brink-Schaaksma (let's just call him Krijn) - she thinks he is "the nicest man she'd ever met". Beatrice sees him at her cousin's birthday party - where Beatrice is wearing a despised brown dress...while her cousin was "a sight to gladden the eyes in her golden sequined jacket and layered silk skirt." Wow. Golden sequined jacket, where oh where can I pick one up? That brown velvet is starting to sound pretty fetching to me.
Krijn proposes a marriage of convenience on page 23 - which might possibly be a record...he wants a "buffer" so he can write his learned medical tome in peace. "I'll guard you like a dragon," she says, and then realizes that she loves him on the next page. Krijn is fairly obsessed with endocrinology (his speciality). He tells Beatrice that he has friends i 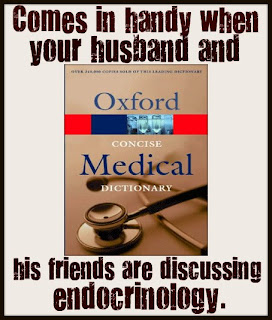 n England and Holland.
"The medical profession?"
"Yes, very largely."
Trixie thought privately that she would need to buy the best medical dictionary there was - his friends would doubtless find long discussions about the human frame and its ailments a pleasant way of spending an evening. If she hadn't loved him so much she would have backed out w 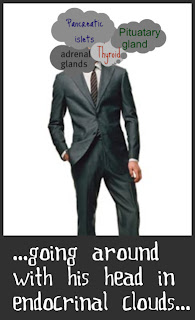 hile there was still time.
I'm willing to bet that Betty Neels had access to a medical dictionary - she uses a plethora of medical terms in her works, especially in An Unlikely Romance. Hyperthyroidism, exophthalmos, corneal ulceration and phaeochromocytoma all make an appearance. I wanted to insert a picture of the endocrine system here, but who knew the endocrine system went that low? In order to stay "G-rated", I opted instead to illustrate my favorite quote from the book..."she was sorry for him, going around with his head in endocrinal clouds..." That is the money line.
Krijn tells Beatrice to pack light, she can buy new things in Holland after the wedding..so she ruthlessly goes through her wardrobe..."the pile of discarded clothes got larger and larger until there was barely enough to cover her decently." After a lovely weekend in Portland, I too have a large pile of discarded clothes, I mean, laundry.
After getting married (sans Aunt, Uncle and Margaret - let's not upset cousin Margaret!), the couple set off for Holland. But first, Krijn stops by the hospital to see a patient...leaving Beatrice in the car for more than an hour with nothing but a map to read. Oh, really? (Being a "buffer" may be all well and good, but at least give me a book to read!)
After reaching his home, Krijn says "You must be tired?"
If that wasn't a broad hint to take herself off to bed, she was a Dutchman - no, a Dutchwoman now that she was married..."
Krijn takes Beatrice off to the Hague to do a little shopping - because she's gonna need some nice clothes...
"...now you will have to dress the part, I'm afraid. I shall enjoy feeling proud of you."
"Don't butter me up," she muttered crossly and glared up at him.
Beatrice puts on one of her new dresses and some high heels and heads downstairs with anticipation of Krijn's approval....needless to say he fails to notice. ...she might just as well have cut a hole in a bath towel and stuck her head through it.
They head up to Friesland to see his parents and 4 younger sisters. And brothers-in-law. This is where they encounter Andre ter Vange, Krijn's cousin - quite the snake in the grass. He sows doubt and discord, albeit, on a small scale. Krijn and Beatrice should really buy him a thank you gift, because without Andre's bouquets of flowers and flowery note, Krijn might just have gone on being oblivious and absent-minded. As it is, Krijn mistakenly thinks that Beatrice might be in love with Andre. Which is quite preposterous...Andre is an architect for Pete's sake...not only that, but he has worked in England and AMERICA. Heavens, simply sailing past America in a Neels is tantamount to becoming infected with typhoid, smallpox, bubonic plague AND Ebola...all at once. Krijn acknowledges to himself that he's fallen for Beatrice. Or maybe he just loves the silver pocket knife she gave him for Christmas...the kind with all the gadgets.
Near the end, Beatrice goes for a walk (so what if it's January in Holland...that's what you do) so as to avoid Andre. In rolls a thick fog and she's lost. Krijn finds her, I love you, no, I love YOU. "Considerably hampered by the grey fog..." he kisses Beatrice. Kisses hampered by fog? Discuss.
Reason to read: An Unlikely Romance is rife with awesome one-liners. These are very often on the snarky side (at least they are the way that I read them). When Krijn says "...one tends to channel ones interest..." Beatrice reflects sourly "you can say that again." I do love a little snarkiness.
Food: treacle tart, boiled cod, parsnips, lobster mousse, noisette of lamb, profiteroles, crumpets swimming in butter, crab bisque (not out of a tin), pavlova with pineapples and whipped cream, fairy cakes, Victoria sponge.


Cars: Jaguar, Bentley, Mini
Rating: An orphan, a MOC (marriage of convenience), lots of food, medical terms and an absent minded professor...I give this one a boeuf en croute, with a tiny helping of queen of puddings for the snarkiness.
Posted by Keira at 7:59 AM