I don't know how clear it is from the little thingamabob on the side panel, but the results are in for our Christmas 2012 poll of favorite Christmas-y scenes.  We had 89 votes from 28 people for 17 different scenes.  And the winner is...

Well, the sad news is that one scene got zero votes.  No one selected the Father Christmas parade from A Girl to Love as a favorite, even though Sadie is just as excited as little Anna and Julie, the five- and seven-year olds who are the ostensible primary beneficiaries of the trip.  Oh.  I get it.  Is that why?  Still -- if the Boxing Day cocktail party got a vote (a single vote, or 1% of total votes), but Father Christmas got none, are we lushes devoid of sentiment?

Seems unlikely, though one worries that the Christmas-morning church and "loving and giving" conversation in Damsel in Green got only two votes, as did sharing our Christmas with the patients on Katie's and other wards in When Two Paths Meet.  The other two-vote-getter was the rather un-splashy St. Nicholaas Day of the van den Berg Eyyfert family in DiG.

Four scenes got three votes (3%) each, none from the big day itself:  Christmas Eve at Julius's, with all the attendant decorating and dining and drinking and dressing-up in DiG; Christmas Eve in Salisbury with light-gazing, dress-buying and fortuitous meetings in WTPM; Boxing Day in ditto, with its further fortuitous meeting-ness; and the shopping sprees of AGtL in the weeks before C-Day.

Just ahead of those, with four votes each, are the Christmas preparations that can be easily completed at Fortnum & Mason's (if you have the right person take charge) in A Christmas Romance, and the Christmas Eve festivities of the Dutch-English ter Mennolts and their English guests in The Mistletoe Kiss.

Now we're up in the upper atmosphere, with the top-six scenes.  In sixth place, with six votes (7% of those cast), are the various scenes in which Georgina and her charges keep Cor entertained and get supplies in store for hall-decking (acres of paper chains) in DiG.  Very festive, with champagne, a new dress and mince pies zooming about the text.

Our fifth-favorite got eight votes (9%), and involves the very different preparing-for-Christmas scene from ACR, when Theodosia learns at the last minute that she'll be Christmas-ing on her own this year, lifts up her chin and purchases the bare necessities to create a joyful day on a shoestring for herself and the cat.  Fourth-favorite is the lovely Christmas-morning scene from AGtL, when everyone (even Oliver!) crowds onto Sadie's bed to open marvelous, magical presents from each other and Father C.  That one got nine votes, which is 10% of the total. 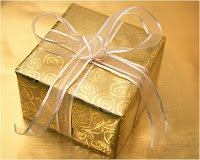 The top three finished very close to each other, with 12, 13 and 14 votes each.  Margin-of-error suggests this is more truly a tie.  We gave 13% of our votes to Ruerd and Emmy's almost-psychedelic smooch on Christmas Day -- that's the title scene from The Mistletoe Kiss.  Radinck's thoughtful sneaking out before anyone can realize that he's witnessed carol rehearsal won 15% of our votes.  I do wonder how many people were voting further for his teasing his wife about Christmas music that evening, almost resulting in Caroline's Waterloo as she botches her knitting and flails about for answers to his sly questions.

So our favorite Christmas scene for 2012  was the last few paragraphs of A Christmas Romance, as Hugo pushes his Bentley from London to Finchingfield, reads the great-aunts the riot act, races back to London (the dodgy part) to scoop up Theodosia and Gustavus, strew kisses about the place, zoom home to London (the best part) and render up a tender proposal of eternal love and joy as the midnight bells chime in Christmas Day.  Yes -- I love that one, too. 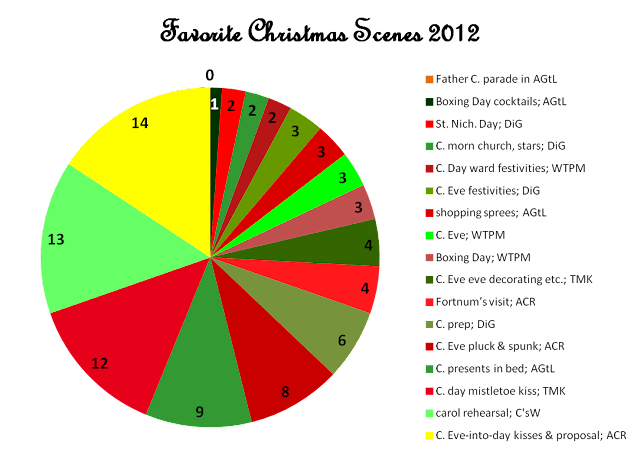 Email ThisBlogThis!Share to TwitterShare to FacebookShare to Pinterest
Labels: betty by the numbers, christmas, contest