I've always had a bit of a soft spot for Venetia - sure, she's married to a hottie...but not only does he ignore her for practically the whole book, he saddles her with the worst excuse for a teenage ward EVER. Despite those lemons, Venetia manages to make some lemonade. One drop at a time. Over a period of several months. I love the little bit about the antique necklace, it's adorable and gives hope for Duert and Venetia's future. 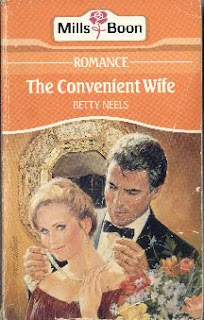 Second year student nurse Venetia Forbes has had a very nasty accident in the woolies section of Woolworths. The old lady with the missing shoes sitting next to her keeps on patting the glass (embedded in her arm) further into her skin. She faints and then tosses her biscuits while being stitched up by a senior consultant brain surgeon...that's right. We're not even on page 10 and our heroine has committed relationship suicide. I love this book.


Our principles:
Plot:
This book really stretches out over a good deal of time He stitches her up. He drives her home. Her granny dies (leaving her utterly without family which begs a demographic question). He helps her out in his cold and aloof way. She visits with the professor's registrar's pregnant wife (which was quite fun to type) which leads to him taking her out a bit. They come across a piece of antique jewelry that she likes, made of amethysts. The store owner tells them a lovely, possibly fabricated--he is a capitalist--story about the original owners and some violets. Violets. This is called foreshadowing. 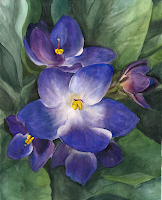 Her life on the ward is un-fun due to a hectoring staff nurse and when Duert proposes in the ward office we, along with our heroine, are allowed to savor a lovely petty feeling of payback. (Stick that in your sluice room and smoke it!)
He needs a babysitter for his plot device until she turns 18 and goes to America. In return she will get a home and family and security in her old age. (Did no one ever hear of IRAs?!)
But it all manages to make sense and before the week is out she's Mervrouw ter Laan-Luitinga. The registrar observes that she will probably run rings around Duert. Her wedding bouquet has violets in it (Foreshadowing!). Duert begins beautifully by dismissing her clothes, is off-hand about the wedding and suggests a stop in Leiden (to visit a patient!) on the way home on what should be their honeymoon. She wisely lets him dig his grave.
Outside of Delft we meet Anneta the Ward (not to be confused with Jabba the Hutt)--a lovely girl that practically has a neon sign situated above her head reading, "I am a plot device and will portend doom." Duert proceeds to neglect his wife terribly as evidenced by her taking up the art of tapestry. Whenever a Neels heroine stitches tapestries I am put in mind of Homer's Penelope--stitching twenty years while her idiot husband wanders back home. So, yeah, Venetia's tapestry is symbolic. 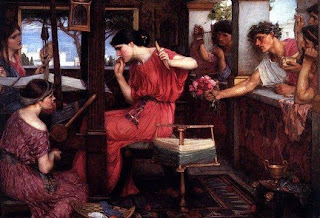 Why is my husband lamely neglecting me?

Anneta takes our heroine on a lot of shopping trips (This is not symbolic.) and she "repays dressing". But a fat lot of good it does her as Duert only takes her to parties full of crowds. He had obviously never spoken to our father on the subject of 'date night'. Venetia learns Dutch and how to drive a car without anyone bothering to notice. Anneta makes up a lot of suspicious dental appointments and the like which clearly point to trouble but Venetia would have to actually see a crack pipe and roll of dollar bills to become truly alarmed.
Duert, briefly coming out of his stupor enough to aid his wife, sends Anneta to Paris (no one good ever visits Paris) for a week and takes his wife off to visit Aunt Millicent on the coast in Salcombe. She looks like Miss Marple. 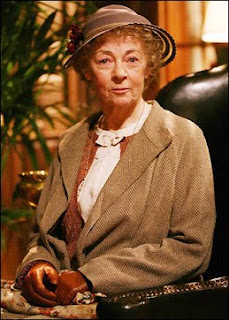 I detect with my Marple-vision that you are perfectly suited.

All is going swimmingly in Salcombe but on the return trip he stops in Leiden again for another patient and she gets forgotten! Passive-aggressive behavior and a row ensue! A row!

Four months later (yes, four! they potter along like that for four months!), Anneta is getting ready to go to off to America when Venetia discovers Jan the Rat (not to be confused with Jabba the Hutt) in the professor's garden meeting illicitly with the serial liar Anneta the Ward. In walks the professor. Anneta insinuates that Jan the Rat and Venetia the Patient have been "meeting".
Themes:
This was published in 1990, when Betty Neels was 80, and she has the cheek to say of the granny, "...she was way behind with modern ways and habits." At one point the professor asks Venetia if she is euphemistically (and I mean euphemistically) living with someone. Also, Venetia is being called upon to curb Anneta for her "wayward lifestyle"--which as far as I can tell includes wearing tight clothes and kissing cads on the street. Conclusion: I love Betty.

Rating:
You get to hear a lot about driving tours through England (take the exit at Oxford, skirt the city, drive toward Buford-upon Tyne...), menus (I'll cover that later) and shopping expeditions (only one of which puzzled me (when Venetia talks Anneta out of a tight black short dress and into a ruched electric blue "suitable" short dress...)). All this would be tedious except that Betty Debbie will be making all the food eventually.
The pacing is flawless and, happily, the emotions make sense. She's mad when she's supposed to be mad, resolute when she's supposed to be...etc., etc. Which all hearkens back to that vomiting in the Casualty room. Venetia is a heroine that makes sense. I love her. She makes this a boeuf en croute. The hero, for all my calling him an idiot, digs his way out of the hole he made quite nicely.
Posted by Betty Debbie at 8:00 AM