So the finalists for TUJD Best Christmas Ever (2012 version) are:

I think it might be helpful to refresh your memories of the various wonderments each of these slim volumes holds, so I shall, over the next few days, post some summaries.  We begin with the story of Staff Nurse Georgina Rodman and Professor in Anaesthetics Julius van den berg Eyyfert, festively studded with her aunt and his many young cousins. 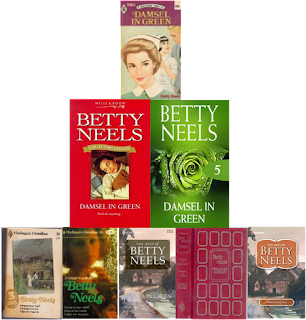 “'Are you using your own money for this Christmas job, Georgina?’” Karel asks, and indeed she is.  Her parcels enable the young van den berg Eyyferts to create paper chains and other decorations well in advance of the holiday – in fact, they’re almost done by St. Nicholaas Day.  Given the family’s Dutch roots, we get to celebrate that event as well, with “real gifts” supplementing their chocolate letters including watches, a Domiplan F2.8/50 camera, pearl earrings and a Meissen figurine for Georgina; coincidentally, one she’s admired for months in a Saffron Walden shop window.

Drawing closer to Christmas, Georgina takes a day for a London shopping spree that includes “a long-skirted dream of a dress, of a dark green velvet...”  The handmade decorations have been sorted into boxes, ready to be put up on Christmas Eve, and “Mrs. Stephens sent up vast quantities of mince pies each teatime.”  There is wet-haired carol-singing by the fire, piano-moving to enhance same, and “Christmas cards festooning the Balkan frame over Cor's bed,” in preparation.  Cousin Karel takes Georgina to visit Aunt Polly (who always spends Christmas with friends since her niece is unlikely to have the day off from her hospital duties) and brings along “a large square box of his own, which, when Georgina queried it, she was told was none of her business.”  It is a gift from Julius to Aunt, and contains six bottles of the best champagne.

And then there’s Christmas Eve:  Georgina has a chance to remind the Prof that his “bad luck” in having to work that day is “nicely cushioned.”  Once that’s out of the way, we begin decorating, “and  as  everyone  had  their  own  ideas  as  to  what  looked  best  the results  were  unique  and  startling;  only  in  the  hall  and  drawing  room  did Dimphena  and  Georgina  get  their  way.    They  had  put  their  heads  together  days before,  and  now  proceeded  to  fill  the  vases  with  charming  arrangements  of holly  and  Christmas  roses  and  coloured  baubles  and  the  silvered  pine  cones they  had  collected  on  their  walks.  They  twined  holly  and  evergreens  around  the  great  fireplaces,  and  arranged the  elaborate  centrepiece  they  had  all  had  a  hand  in  on  the  dining  table.  There  was  a  small  tree  for  Cor's  room,  which  they  had  put  as  close  to  him  as possible,  so  that  he  could  help  with  its  decoration,  and  while  they  did  that, Karel  and  Franz  blew  up  the  balloons  which  they  insisted  were  an indispensable  part  of  the  decorations.    Karel  hung  them  in  great  colourful bunches  all  over  the  house--he  hung  the  mistletoe  as  well,  and  then  refused to  tell  them  where.”

Georgina marches through the snowy lane to fetch a last few tags and wrapping paper, singing of snow.  Her Christmas wishes come partially true when Julius gives her a warm ride home in the Rolls, interrupted only to exchange gifts with the Leggs at the lodge, and requests, with an avuncular kiss, that she wear her prettiest dress to dinner.  Then there’s that whole mother’s-diamond-ring thing, largely forgotten over smoked salmon, roast goose, chestnuts, cranberry sauce, haricots verts, potatoes noissette and zabagloine – and claret, and champagne.

We have a confab in the Professor’s bedroom(!), a sneaky foray to leave Christmas socks by the younger children’s beds, heady compliments and liqueurs by the fire, much, much too late for someone planning to attend 7:00am service.
I’ll let Betty take it from here:  “It was cold when she left the house the next morning and made her way to the garage.  She was in the Mini and had just switched on the ignition when Julius said out of the darkness, ‘Good morning, Miss Rodman, and a Happy Christmas.  Move over--if we are to risk life and limb on these appalling lanes, I might as well be responsible for the damage.’  She moved over without a word, her heart beating a rapid tattoo which she felt sure he could hear.  It seemed not; he got in beside her and shut the door with the air of a man fitting himself into a too tight coat.  It was a good thing that she was a normal-sized girl; as it was, it would be impossible for them to be any closer.”

“The little church was full, its early morning chill scented with holly and chrysanthemums; Georgina enjoyed the service and said so on the way home. ... It was still very dark, but there were lights at some of the windows of the rambling old house, and the clear frosty sky made the stars seem very close.  Georgina, her head thrown back, stood gazing upwards.  ‘I do like Christmas--it's a wonderful time.’  She felt his hand tighten on her arm.

“‘Full of the Christmas spirit, I hope, Miss Rodman.’  She brought her gaze down from the sky to the level of his face above hers.  ‘You mean loving and giving?’ she asked simply, like a child.  He said slowly, ‘Yes, that's what I mean--loving and giving.’  He loosened his hold on her arm and added matter-of-factly, ‘Look out for the steps, they're slippery.’  The day promised to be a wholly happy one.”

“Her own presents she carried to her own room; they made quite a large pile, for they had all given her something, from Beatrix's lop-sided pincushion to the Professor's silver Valentine mirror, an exquisite trifle which must have cost a pretty penny...  Much later, in bed, she ... reminded herself that it had been one of the best Christmases she had ever known, and went determinedly to sleep.”