It’s beginning to look a lot like A Christmas Romance

Those finalists, again, for TUJD Best Christmas Ever (2012 version) are:


Let us recall a few highlights of that latest-published volume, in which dietician’s assistant Theodosia Chapman manages to meet senior medical consultant Professor Hugo Bendinck, fall for him, adopt a dog with him, lose him (the doctor, not the dog), and win his undying love forever in a mere 103 pages in my 2001 Mills & Boon “Betty Neels Collector’s Edition.” 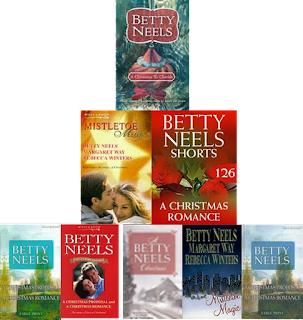 The story opens just five weeks before Christmas, when it’s cold and wet and dark outside, but cozy and warm in Theodosia’s London studio flat, with its bright cushions and handsome ginger cat, Gustavus.  Theodosia lives alone but plans to spend the holiday with her remaining family:  two elderly and rather unloving great-aunts in a chilly cottage in Finchingfield.  Much of the book’s four chapters concern various preparations for Christmas, greatly enlivened by the assistance of Hugo, whom Theodosia meets at the hospital where she works as a typist.

There’s also an awfully lot of mention of cold:  cold weather, Great-aunt Mary’s face “held little warmth,” cold cottage, underdone beef, cold supper, “not quite hot” bath water, cold feet (literal), chilly church, cold lunch, shivering one’s way to the bathroom, cold sleet, a brief mention of her parents’ deaths, five years earlier, of ’flu.  I am curling my toes and hunching my shoulders just typing about it.  But Theodosia has ginger hair – a bit of fire – and a ginger cat, and the professor’s car and home are blissfully warm, and Christmas is coming...


So off we go to the hospital ball, in a nipped and tucked dove-grey dress from Oxfam, to dance with the professor and ride luxuriously home in his Bentley.  And then it’s time to dash out to Fortnum & Mason’s to do the aunts’ shopping – but wait, the professor is there again, driving us (luxuriously) to that emporium to hand over the shopping list to the food-department experts and spring for a lunch of (hot) omelette and a glass of wine, and resisting “a wish to kiss the tip of her nose.”

And the following weekend, in the Christmas spirit of loving and giving, Theodosia succors an old lady hit by a car.  The professor, coincidentally and fortuitously driving by, ties off gushing arteries and whatnot whilst our heroine chats with the plucky survivor:

“She went and knelt by the old lady, who was still conscious but very pale.  ‘Bit of bad luck,’ she said in a whisper. ‘I was going to me daughter for Christmas...’  ‘Well, you will be well again by then,’ said Theodosia.  ‘The doctor's here now and you're going to hospital in a few minutes.’  ‘Proper Christmas dinner, we was going ter 'ave.  Turkey and the trimmings—I like a bit of turkey...’  ‘Oh, yes, so do I,’ said Theodosia, her ears stretched for the ambulance.  ‘Cranberry sauce with it...  and a nice bit of stuffing.’  The old lady's voice was very weak.  ‘And plenty of gravy.  Sprouts and pertaters and a good bread sauce.  Plenty of onion with it.’  ‘Your daughter makes her own puddings?’ asked Theodosia, and thought what a strange conversation this was—like a nightmare only she was already awake.”

You’ve got to love that, right?  She’s kneeling on the sidewalk, speckled with elderly blood, queasy at the site of the “awful mess” a speeding car can make of a stranger’s leg, and chatting about pudding recipes.  Perhaps not traditionally Christmassy, and perhaps adopting an unloved mutt out of the dogs’ home (which they do that afternoon) isn’t either, but the spirit is certainly right. 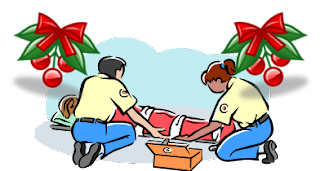 Sadly, by Christmas Eve we’re in a fine muddle, the prof having told Theodosia he plans to marry, and neglecting to mention, from some misplaced modesty or inappropriate sense of the dramatic, the you bit – I plan to marry you.  So of course when she sees him laughing with a lovely woman who kisses his cheek, she doesn’t think, “Must be his sister,” but instead grabs the nearest path lab assistant and pretends they’re dating.  And then off home to the sometimes cozy, sometimes chilly bedsit to pack the great-aunts’ gifts and catch the late train.  Except landlady Mrs. Towzer, “Aving a bit of a party this evening; must get meself poshed up,” drops off a letter from those fickle aunts, dis-inviting Theodosia for Christmas! in preference to an elderly archdeacon and his wife recently returned from South America.  A moment’s despondency for Theodosia, and then:

“...she got up, counted the money in her purse, got her shopping bag from behind the door, assured Gustavus that she would be back presently and left the house.”

She lays out her train-ticket funds on three days’ groceries, plus a discounted turkey leg, a small Christmas pudding and a plastic tree.

“...‘We are going to have a happy Christmas together,’ she told Gustavus.  ‘You'll be glad, anyway, for you'll be warm here, and I've bought you a present and you've bought me one, too. 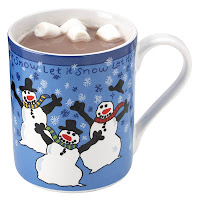 “...The room looked welcoming and cheerful; the holly and the Christmas cards covered the almost bare walls and the Christmas tree, viewed from a distance, almost looked real. The cat food, wrapped in coloured paper, and the box of chocolates were arranged on each side of it and she had put the apples in a dish on the table. ‘Quite festive,’ said Theodosia to Gustavus, who was washing himself in front of the gas fire. ‘Now I shall have a cup of cocoa and you shall have some milk, and we'll go to bed.’”


But Hugo has been busy disentangling lies and grilling great-aunts, and swoops in to bear his love away to his warm Regency house, rendered less quiet than usual by the arrival of family.  Take it away, Betty:

“‘You are spending Christmas with me at home.’  ‘I'm not. I have no intention of going anywhere.... It is most kind of you,’ began Theodosia, and put a hand on his arm.  This was a mistake, for he took it, turned it over and kissed the palm.  ‘Oh, no,’ said Theodosia in a small voice as he wrapped his great arms round her.  She wriggled, quite uselessly, and he said gently, ‘Keep still, my darling; I'm going to kiss you.’  Which he did at some length and very thoroughly.

“‘I have been wanting to do that for a long time.  I've been in love with you ever since we first met.  I love you and there will be no reason for anything I do unless you are with me.’

“He gave her a swift kiss.  ‘Now come along.’  He swept her downstairs and as they reached the hall Mrs. Towzer came to see who it was.  ‘Going out, Miss Chapman?  At this time of night?’ She eyed the professor. ‘You've been here before; you seemed a nice enough gent.’  She stared at him severely.  ‘No ’anky-panky, I ’ope.’  The professor looked down his splendid nose at her. ‘Madam, I am taking my future wife to spend Christmas at my home with my sister and her family... ‘Oh, well, in that case... ’Appy Christmas to you both.’

“‘I promise I will never be stern with you.’  He turned to look to her as he started the car. ‘Or our children.’  She smiled and wanted to cry, too, for a moment.  From happiness, she supposed. ‘What a wonderful day to be in love and be loved.  I'm so happy.’  As they reached his house, the first strokes of midnight sounded from the church close by, followed by other church bells ringing in Christmas Day. ... He closed the door behind him, set Gustavus in his basket on the table and swept Theodosia into his arms. ‘This is what I have wanted to do—to wish you a happy Christmas in my own home—your home, too, my dearest.’  Theodosia, after being kissed in a most satisfactory manner, found her breath.  ‘It’s true, it’s all true?  Dearest Hugo, Happy Christmas.’  She stretched up and kissed him and then kissed him again for good measure.” 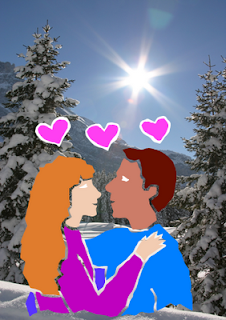