Make sure you read all the way to the bottom where Betty AnoninTX gives us the mileage for her epic National Park tour! The only time I ever took an automobile trip nearly that far was when I was twelve-ish and my parents loaded up the station wagon with 7 kids and hauled us to Disneyworld (and back!) circa 1972.:

Cades Cove is a favorite spot of ours in the park because of the historical aspect.  Cades Cove was a farming community.  It reached its top population of 708 in 1900.  Many of the farmers sold their land to the states of Tennessee and North Carolina, which in turn gave the land to the federal government.  The park was officially established in 1934.  Of course there were holdouts.  I'm not sure when the last person left the Cove.  The school closed in 1944, and the post office closed in 1947.

The drive through Cades Cove is an eleven-mile, one-way loop that goes by old churches and cabins.  It's a truly beautiful area, and we saw deer and wild turkeys.  On the loop are three churches with cemeteries, six cabins, plus a visitor center at a historic area with more buildings.  I think this photo of the Betty book at the Methodist Church is one of my favorites.  It's one of the most photographed spots in the park.  The original church was built in the 1820s, and this building replaced it in 1902. 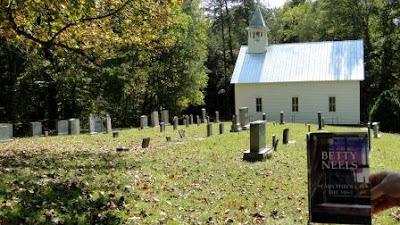 On the back side of the loop is a visitor center and historic area where there is a walking tour.  The Gregg-Cable house is here, along with a grist mill, a cantilever barn, a drive-through barn, a blacksmith shop, and several other buildings, plus a small cemetery nearby.  The grist mill is staffed and still working (demonstration).  Deborah and Gerard posed outside the mill.  An old millstone and the water wheel are in the photo.  We really enjoyed the tour. 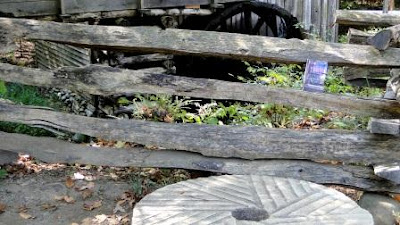 All the old cabins and houses are open so that people can go inside.  Here are Deborah and Gerard posing at the Carter Shields Cabin.  George Washington "Carter" Shields was crippled for life in the Battle of Shiloh in the Civil War.  He moved to Cades Cove in 1906 and bought this property in 1910. 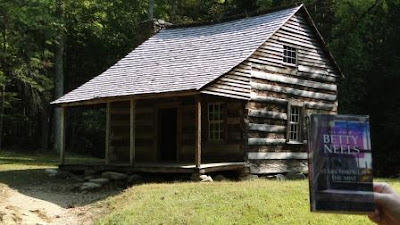 One afternoon we drove to the Cataloochee Valley, primarily to do some elk watching that evening.  The last elk in Tennessee was killed during the mid-1800s.  The Park Service reintroduced elk into the park in this area in 2001.  Elk rut during the fall, and I knew we could watch them in Cataloochee.  When a bull bugles, the hair on my head literally stands up.  It's a sound like no other.  I posed Deborah and Gerard with a bull that had been pacing up and down and bugling at two more.  He tired out and lay down, so we snapped a quick shot then.  It's not the best, but it's definitely a Betty in the Wild photo.  Also in the valley are old cabins and homes.  I wanted to tour the Palmer Chapel, but a bull elk was standing in the meadow out front.  We did look at the Beech Grove one room school and several cabins. 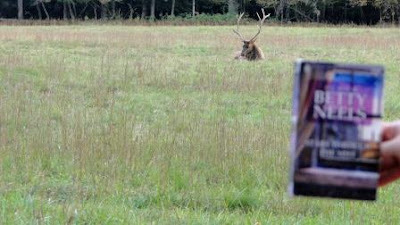 In the morning we started back home.  We spent the night in Jackson, Mississippi.  The next day we went to Vicksburg to tour the Vicksburg National Military Park, site of a Civil War battle.  While we were there, it started to sprinkle then rain.  We drove in rain all the way to DeSoto (south Dallas).  It was horrible.  Sheets of rain.  Wind. Flooding around Shreveport, Louisiana.  We saw two semis jackknifed.  The PRT was calm.  I was not.  We drove 35-45 mph most of the way, but we finally made it.  The next day we headed home to our own bed.

It was quite the trip, and I enjoyed every moment of it except driving through that storm.  We left on September 4 and returned home on September 30.  When we pulled into the garage, we had driven 7,314.1 miles.  I hope you enjoyed the Betty photos.  We're planning another grand adventure for next year!