Betty in the Wild - Ellicott City

We need a few items to refurbish the living room, so a few weekends ago I headed off to Ellicott City, Maryland, about an hour up the highway from DC and renowned for its quaintness and antique shops.  Sadly, I got there at about 4pm on a Saturday, and it turns out the town more or less closes at 5pm.  Humph.  Tea on the Tiber, the Victorian tearoom next the Tiber River (more like a creek at this point) turned me away, as they serve their teas at noon and 3pm only, and had no more scones.  Harumph!  Who has tea before 4:00pm?
Their loss, as I found a wide variety of teas, a delicious egg salad sandwich and a beautiful though gelatinous (viz, not tasty) chocolate cake practically next door, at the Bean Hollow coffee shop.  So neener.
I did get to browse around one antique shop and a good thrift store (difference between ‘antique’ and ‘used’ furniture, anyone?), and determined to return. 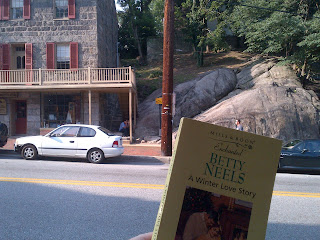 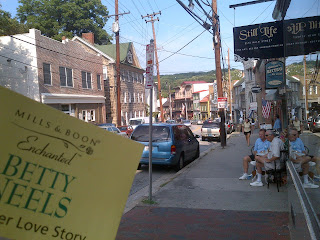 Wonder of wonders, over Labor Day weekend the Jonkheer took it into his head to focus on the furniture project – and he is a man of impressive focus.  We went to four mainstream furniture stores on Saturday, to get some ideas on styles we could both bear, and prices neither of us could.  On Monday, we visited a couple of modern-furniture stores (the Jonkheer as appalled as TGB would be), a couple of cheap-stuff places, and two thrift shops.  In between, on Sunday, we hit every shop in Ellicott City.  We began by fortifying ourselves with tea.  That’s right; having learned my lesson, I made a point of showing up early at Tea on the Tiber and demanding scones.  And though those scones were lemon-coconut (coconut!  bleah!), they were delicious, as were the tomato sandwiches, the date-and-cream-cheese sandwiches, and the truly fantastic cucumber-and-melon salad in a little metal cup. 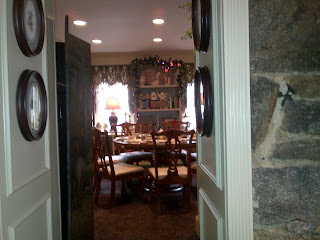 TotT advertises itself as ‘Victorian,’ and the rooms are impressively stuffed with knick-knackery.  The hostesses wear fascinators (those mini-hats that are mostly fluffy bits of tulle), and the poor waitresses wear black dresses just below the knee with full, white, ruffled aprons.  There may have been mob caps.  Tip extra.


And now, off to the shops!  One of my favorite finds was this 1950s/60s sewing machine in a shade of lime green not done justice in the photo (sorry).  I was thinking of Betty Keira’s tale of becoming a pleat-sewing runway star through the $5 machine she picked up at Goodwill – but that’s not what the shop had in mind for this beauty, as the label makes clear. 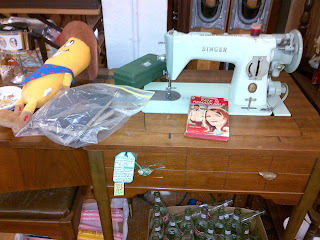 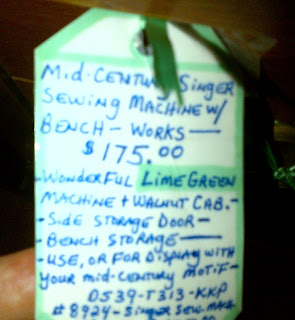 Fortunately, there was another option...
Two very Betty moments presented themselves – one in the form of a pleated dress (not a nightgown; that’s a dress) that made me think of Betty’s favorite, Gina Fratini. 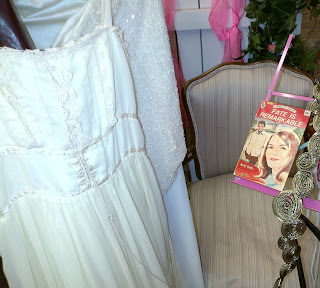 This dress (not nightgown) is actually by the firm Gunne Sax.  Anybody?  Anybody?  By furrowing my brow and pressing hard on my temples, I can remember Gunne Sax, by Jessica McClintock.  Many, many 1970s US high-school girls wanted to wear one of these to the prom.

Even better was this lovely scene.  The lampshade, white on the outside, is lined with pink!!  I should have bought it, shouldn’t I?  I didn’t even think to check the price.  O, woe. 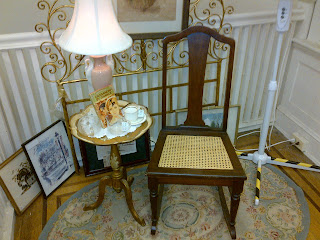 Finally, and with really no reference to Betty that I can think of, I just had to snap a shot of this: 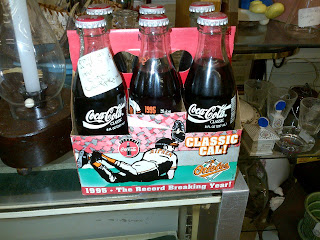 That’s right, a 17-year old six-pack of Coca-Cola, celebrating baseball’s Cal Ripken.  He played for the Baltimore Orioles, so maybe someone in Maryland would actually want this?
Bettys Magdalen, JoDee, Army and Barbara and whoever else is in the neighborhood – Bettysday in Ellicott City?
Incidentally, we didn't actually purchase any furniture.
Posted by Betty van den Betsy at 10:28 AM