Many, albeit belated, returns of the day, Betty


The mid-Atlantic Bettys slowly dispersed after a delightful tea party.  Army Betty drove purposefully Pentagon-wards; Betty Kathy disappeared as mysteriously as she had arrived; Betty Adrianne strolled off to poke her pretty nose into a few needlework-shop windows; Betty Barbara’s husband of never-mind-how-many years pulled the socking great Dodge up to the curb and collected his wife and her friend of schooldays Betty Margaret Mickie, and Bettys JoDee and Magdalen and I, your faithful correspondent, stood on the pavement and gossiped gently.  We had gotten to the part about the domineering-ness of the Neels heroes when Betty JoDee said, in her soft West-Texas-Country voice, “Some people only like the wimpy heroes, like Hugo.”  “Gotta go!” I cried, leaping backwards.  I surely hope those two enjoy their multi-hour drive home together... 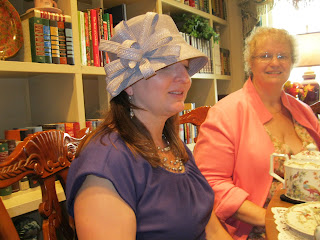 Betty JoDee and Betty Magdalen, before the controversy began.

If I note a few of the highlights of our only-slightly-tardy celebration of The Great Betty’s 103rd birthday, I betcha the others will chime in with their thoughts in the comments section:

Best hat:  Betty JoDee’s, as shown above.  Not only is it a useful shade of gray that is actually more an attractive shade of silvered lavender; not only does it have that great bow; but also – when Bettys Magdalen and van den Betsy started a discussion that meandered gently down the back alleys of Brighton, Betty JoDee was able to pull that topper right down to her nose, covering her old-fashioned ears to avoid be-sulliement.   Yay for hats!

Most talented:  Betty Adrianne was wearing a gorgeous shawl she’d knitted herself.  I know nothing about knitting, but this one was lacey and light and complicated looking, and really beautiful.  Also, she’d used some kind of needle-craft implement as a stickpin, for bonus chic points.

Best show-and-tell:  Army Betty brought her Bosnia souvenirs, which invoke Yeats’s “terrible beauty,” plus lots of photos of her time in Sarajevo.  There’s one that shows a parking lot with a low white building behind which lies the courtyard described in her earlier comment!  Betty Adrianne had photos of the manor in her husband’s ancestral English village, plus an Aga.  We hope she will send them to Betty Debbie for future BitW posting.  Betty JoDee claims to have BitW pix from her most recent foray across the pond; we shall see if we ever get to see them. 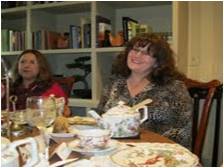 Betty Adrianne – if a photo that shows her scarf better crops up, I’ll post it – and Army Betty in leopard print.

Best invitation:  Betty Magdalen will apparently give any of us traveling through her neck of Pennsylvania a bedsitting room with en suite bathroom for a night.  I inferred that breakfast might be included in the offer, and am trying to figure out how one makes the basis for a claim that profiteroles are a breakfast food.

Best sport:  Betty Margaret, who’s clearly not the, uh, enthusiast others of us are, and only managed a few minutes conversation about her sci-fi favorites.  She also qualifies for best-coordinated, as her peacock-print dress was perfectly complimented by a peacock-feather fascinator.  Ohmagudnetz, it was lovely.

Best surprise:  Betty Kathy!  A lurker!  She just showed up, and thanks to Betty Sue we had an extra place at the table as Betty Sue RSVP’d late and then didn’t make it.  Not meeting Betty Sue was the un-best surprise, but we’ll get you next time – maybe at Army Betty’s NoVA Halloween party, which I plan to attend costumed as a devoted family retainer and flummox everyone but the hostess. 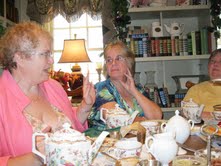 Betty Magdalen, Betty Margaret in peacockery, and half of Betty Kathy.

Best hilarious moment:  Betty Kathy, asked why she lurks and doesn’t comment, said something like, “I just don’t have anything very witty to add.”  If there’s such a thing as ladylike guffawing, that’s how the table responded; I had to stuff most of my napkin in my throat to arrest the chortles.  “That’s never stopped any of the rest of us,” was the general consensus.

Best not-entirely-delicate gobbling:  Me!  For scarfing down three tomato sandwiches, two cucumber-lavender sandwiches (yummy), two dishes of delicious corn salad, and a scone with both cream and lemon curd.  Plus a pot and a half of tea. 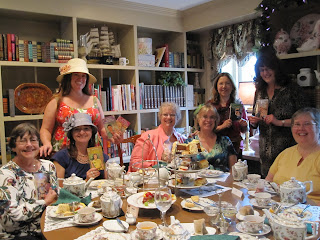 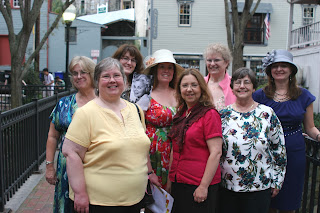 So this runs Betty Margaret, Betty Kathy, Army Betty, The One True Betty (present on paper, thanks to Betty Debbie's inspired idea of Betty-on-a-stick, though I didn't get as far as the stick), Betty van den Betsy, Betty Adrianne, Betty Magdalen, Betty Barbara and Betty JoDee.

Resolved:  We’ll do it again sometime!

Many thanks to Bettys Barbara and Margaret/Mickie for the photos.  If any of the rest of you have more to share, please do send them along and I'll post them with more non-witty commentary.
Posted by Betty van den Betsy at 6:59 PM