On our way to and from Maine and Canada, we made a few side trips that we enjoyed very much.

In Pennsylvania, we spent several hours at the Flight 93 memorial near Shanksville.  We were there on September 10.  All I can say is that it was very moving and overwhelming.

After spending the night in Binghamton, New York, we made our way through beautiful Vermont and New Hampshire.  I found a neat place while looking at hotel reviews on TripAdvisor, and I just had to see it!  It’s called the Flume Gorge, which is located in Franconia Notch State Park.  We barely made it to the Flume in time to rush through the door to pay the admission before it was closed for the day.  I forgot to grab a Betty book!  Rats.  The Flume is an 800 foot long natural gorge.  A boardwalk runs up the gorge, and it is a beautiful walk.  At the top, we turned around and came back down the boardwalk instead of walking the trail back.  We spent the night in Twin Mountain.

The next morning we rode the cog train to the top of Mt. Washington.  It was fun.  The PRT has a fascination with the crazy weather and the weather observatory on Mt. Washington.  It’s the highest peak in the NE US.  In 1934, there was a wind gust of 231 mph there.  It was a bit hazy that morning, so we could not see all the way to the Atlantic.  Betty posed for a shot looking out at the beautiful view.  I didn’t think to pose Betty with the train. 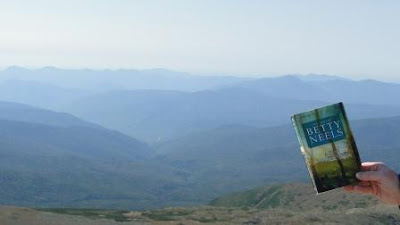 On the way back, we made a stop for something that was really exciting for me.  We went to West Point Military Academy! In another post I mentioned being very interested in the Battle of Little Bighorn.  General Custer is buried at West Point, and I paid my respects at his grave.  Then we visited the West Point Museum, and I was able to see a tiny scrap of paper.  Wow!  It is Custer’s last written order, written out by Adjutant Lieutenant W.W. Cooke, and carried by Giovanni Martini to Captain Benteen.  Benteen saved it and gave it to a friend later.  Eventually it was sold in an auction, and the buyer donated it to the museum.  There were other Bighorn items there, too.  We didn’t have the time to explore the whole museum, but I am so glad I was able to see the order. 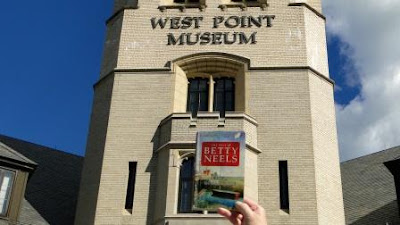 I did manage to have a cup of tea on Delayed Bettysday!  This is at a rather rundown hotel in Wells, Maine.  After the beautiful Bayview and both wonderful B&Bs, this one was a bit of a shock to my system.  The PRT left me to drink a cup of tea and read a chapter of Roses Have Thorns so that I could adjust.  He, bless his heart, went to the guest laundry to wash a load of my knickers and socks.  The PRT knows what it takes to soothe me. 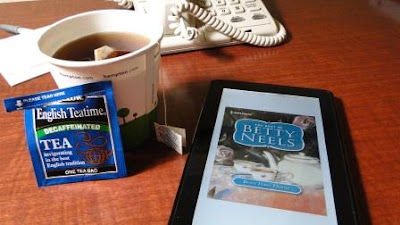