Betty AnoninTX...more of her epic trip:

We drove through another park:  Shenandoah National Park in Virginia.  We used it as a scenic drive on the way to another stop.  I wish we would have had time to stay a day or two so that we could have done some hiking.  The rolling Blue Ridge Mountains are beautiful. 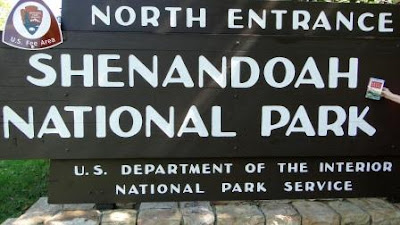 We drove what is called the Skyline Drive.  We entered the Front Royal (north) entrance and exited through the Rockfish Gap (south) entrance.  That is 105 miles, driving 35 mph.  We stopped at the Dickey Ridge Visitor Center near the north entrance and the Byrd Visitor Center at Big Meadows to look at exhibits.  We pulled off at overlooks and enjoyed the scenery. 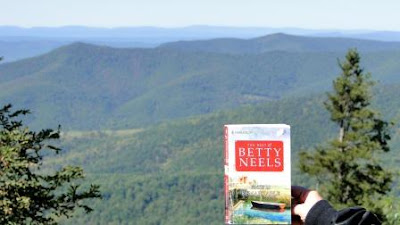 Fate, alas, was NOT remarkable here.  BettyMary, I had hoped to find Betty Ariel to take a “Surprise!” photo with her to include in this part.  I asked the ranger at the desk at Dickey Ridge if she might know a ranger named Ariel.  She asked what she did, and I explained to the best of my ability.  She nicely pointed out that it was a large park and that there were many rangers in the park.  She suggested I ask at Big Meadows.  I asked the ranger on duty there, and she said basically the same thing.  I even stared at every name tag on every ranger, just in case.  No luck.  I had hoped I would be lucky and spot her somewhere.