Betty in the National Parks II: Part One 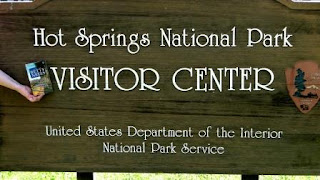 via email from Betty AnoninTX:


The PRT (Poor Retired Teacher as opposed to RDD) and I decided it was time to hit the road again for another national parks trip.  We had debated whether to go west or east, and this time, the eastern United States won.  We packed up our new Land Rover, cleverly disguised as an old Chevy Trailblazer, and hit the road.  The PRT put his medium-sized, Reebok-shod foot on the accelerator, and we shot off down the road to Arkansas.  We made it all the way to Post, Texas, a whopping 40 miles, before it became glaringly obvious that the air conditioner was not working very well.  We found a great place in Dallas that fixed the problem, but it added at least two and a half hours to the travel time in what was already a long driving day.  Not the most auspicious beginning! 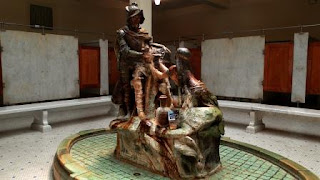 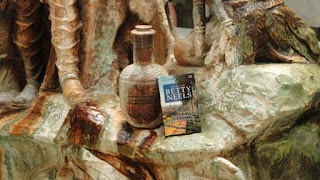 The next day our first (quick) stop was Hot Springs National Park.  Joining us at the Hot, Hot Springs were Becky and the Hot, Hot Baron Tiele (The Promise of Happiness).  We toured the Fordyce Bathhouse, which opened in 1915 and which serves as the visitor center.  We were able to tour all the floors and both the men’s facilities and the women’s facilities.  The women’s are much, much smaller and not near as fancy! Each has a cooling room, pack room, steam room, hydrotherapy room, and bath hall. There is a beautiful, huge, stained glass skylight in the men’s bath hall, and underneath it is the DeSoto fountain where Becky and Tiele posed.  The tubs were so deep, and some of the showers had 17 showerheads. The top floor has a gym on one end, but the best part is the music room with its stained glass windows.  Unfortunately most of the exhibits in the building were empty because the Park Service was preparing to renovate the Fordyce.  We wandered up and down Bathhouse Row where several bathhouses are still open and looked at the springs out back.  We drank a cup of the hot water straight out of the ground.  There was no time to hike any of the trails, but it was so hot and humid we didn’t care.  Then we hit the road again in our (thankfully) nice, cool Land Rover Chevrolet. 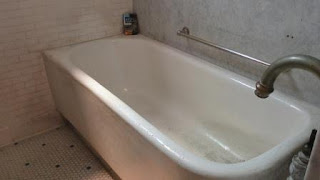 More to come…
Posted by Betty Debbie at 3:29 PM