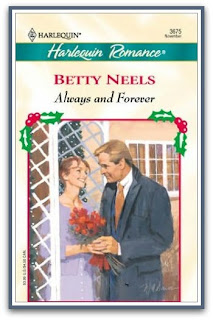 I get a little frustrated with this one.  One one hand (Canadian dog-kicking baddies!  Ffreaking awesome surnames!) it's a unique set-up, on the other hand (Always and Forever?  Bland, bland, bland), The Great Betty didn't really smack it out of the park.  Which is all a bummer as I was all set to enjoy the withering blast of Neels' ire raining down on our Canadian friends to the North for once.
Enjoy the bit you get,
Betty Keira

Half-orphan child of widowed mother.
Widowed mother is rather weak.
Mother marries again.
Step-father is harsh and cruel.
Half-orphan runs away to Great-Aunt, traveling quite a distance in some duress.

No, this isn't a review of David Copperfield, but the above list does bear a striking similarity to the opening scenes of it.

Amabel Parsons (Amabel...so close to amiable, and yet....yuck). Age 26ish, Araminta from top to bottom. Her widow mother has left her in charge of their B & B while she is in CANADA visiting Amabel's unnamed sister who has recently had an unnamed baby. Sooo. That leaves Amabel in a lonely, somewhat isolated farmhouse, welcoming strangers in to sleep in the bedrooms. During a brief break in the middle of a raging thunder and lightning storm, "The lull was shattered by a peal on the doorbell.". (cue scary slasher movie music). Enter....

Dr. Oliver Fforde (yes, two "f"'s and an "e" -which he would be required to drop if the Fforde Ffamily ever immigrates to America) and his mother. Thus begins our story. Amabel and Oliver (she doesn't have to call him Dr. Fforde) are Ffriends at once, they enjoy each other's company. He worries a bit about her being alone, he visits periodically. Then comes the day....Amabel gets a letter from CANADA....this does not bode well for our heroine. Her absentee mother gives her the Ffabulous news that she is going to stay a little longer in Canada and Get Married!!! and then Mommy dearest concludes with this lovely parting shot "You're such a sensible girl, and I'm sure you're enjoying your independence. Probably when we get back you will want to start a career on your own." This is code for: Since I now have a man in my life, I won't need you. Amabel sits down and assesses her accomplishments. "She could cook - not quite cordon bleu...she could housekeep, change plugs, cope with basic plumbing....tend a garden...Her pen faltered. There was nothing else." It goes on to say that she had her A levels. As far as I can tell, having her A levels would mean that she could go to University. Right? Why do Neels heroines never take advantage of that? I know, you're going to say..."But Betty Debbie, I read a Neels wherein the heroine has gone to university." To that, I say, "Yes, she may have started, but she dropped out...probably so her younger brother or sister could go instead, or to take care of her sick/aging a)mother, b) grandmother, c) aunt, d) second cousin once removed, e) all of the above...." Do they not have scholarships and college grants in the UK? This lack of education keeps coming back to haunt Amabel...

Mummy and new Step-Daddy Keith(why couldn't Betty have named him Edward as in Murdstone??? That would have been so much fun) come home. Step-Daddy immediately plows up the beautiful but old apple orchard so that he can build a big ugly greenhouse Ffor his profitable market garden. Amabel can stay and be unpaid labor, thus saving Step-Daddy a boatload of expense. That might have been okay...but Step-Daddy has an even darker side. In one sentence we Ffind him hitting the old dog Cyril and kicking the old cat Oscar. He then goes on to say that dear old Cyril and Oscar won't be alive much longer, if he has anything to say about it. That tears it. The very next day Amabel throws her bonnet over the windmill with a vengeance. She hauls herself, her luggage AND Cyril and Oscar cross-country to York. Oops, she Fforgot to call Aunt Betsey, I mean Thisbe. (I so identified th 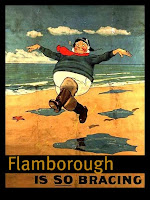 e beginning of this book with David Copperfield that I thought Aunt Thisbe's name was Aunt Betsey - until I reread the book). Aunt Thisbe bears a striking resemblance, personality-wise to Betsey Trotwood. Aunt T is happy to welcome Amabel, and just as happy, later on, to welcome visiting Dr. Oliver Fforde. Amabel and Oliver have a lovely day together - taking their dogs for walks on the beach at Flamborough (in November or December...on the North Sea). Amabel confides to Oliver that she needs to get a job just as soon as she can, because she found out that Great Aunt Thisbe was supposed to go on holiday in Italy, and Amabel just has to find a job, where she can live in AND take Cyril and Oscar, her Ffurry millstones.

Oliver hears of a possible job through the evil villainess, Miriam Potter-Stokes, an elegant young widow who wants to get her fingers into the Fforde pie (I am sad to report that "Miriam" is also the name of my only granddaughter). Miriam has an old school chum, Delores who just so happens to own a little shoppe in The Shambles and needs a shop assistant. Oliver gives Amabel(that name just doesn't get any better) the heads up about the job, and Amabel is all set. A job (at sweatshop wages), a room behind the shop to live in with Cyril and Oscar, and a sink and a toilet. What?? No shower or bath? That's okay, once a week she goes back to Aunt Thisbe's and takes a bath. Whether she needs it or not. 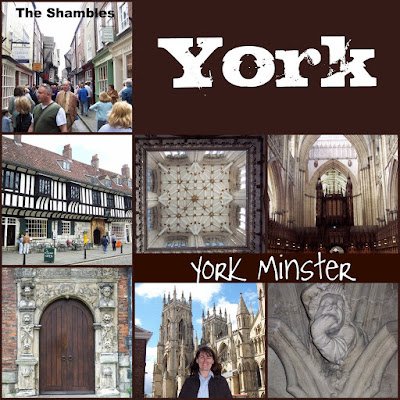 The scenes in York are actually my favorite part of Always and Fforever. Amabel and Oliver walk around town seeing the sights...(I love York - I spent a day there once), then head out to spend the next morning at the sea again. In December. Yeah. Dolores figures out that Amabel's Oliver is the same as Miriam's Oliver, and so gives Miriam a call. Miriam fakes tears and begs Dolores to give Amabel the sack. Which she does. This makes Amabel and her Ffurry millstones homeless. Aunt T is still in Italy, her household helpers are away for 10 days...so Amabel uses up her money for lodging and finally takes sanctuary (great shades of Victor Hugo!) in a little church. Oliver just so happens to show up and takes her to his Great-Aunt Lady Haleford, who is recovering from a mild stroke and is a bit peevish and irascible. Aramintas are great at this sort of thing - companion to the elderlies (British word alert!). She realizes finally that she is in love with Oliver (Oh NO, I Must Not Let It Show). Miriam Potter-Stokes finds out that Oliver is still seeing her, so she sneaks up to Lady Haleford's and tells Amabel that Oliver is a great one for helping lame dogs over styles, but nevertheless, Oliver is Marrying Miriam. This, by the way, is completely and utterly Ffalse. Oliver has never particularly liked Miriam - they went on a few dates and saw each other at parties held by mutual acquaintances. Amabel of course does not know this and is somewhat relieved to be called home to nurse her mother through a bout of pneumonia. Turns out, her mother is practically well - it's just cheaper to have Amabel there than to pay a housekeeper. Oliver finds out what Miriam has done and sort of tells her off "I need a wife who loves me and whom I love", then, after a few days he goes to Ffetch her from her mother. But not without first collecting Great Aunt T (now returned from her Italian sojourn) and installing her at his home to act as chaperon...until the wedding because "Oliver is a stickler for conventions"(which I always think sounds like he hands out campaign buttons at political rallies).

Fashion: a jersey dress in a pleasing shade of cranberry red! When Amabel splashes out on a new dress for Christmas she buys....a silvery GREY dress.

Rating: Alas poor Yorick, I mean York, I wish I could rate you well. The best I can rate the names in Always and Forever - beans on toast. Evil Canadian dog-kicking stepfather named Keith - beans on toast. Mother...tinned soup. Great Aunt Thisbe - queen of puddings (she is kind of awesome), plot similarities to David Copperfield - boeuf en croute (I wish Betty had kept going in that vein), the arc of Amabel and Olivers friendship/love - boeuf en croute (like at first sight that turns to love). I suppose if you add it all together, divide by the common denominater, take the square root of Miriam Potter-Stokes, the answer would be somewhere in the neighborhood of treacle tart (with a little lashings of whipped cream for York).
Posted by Keira at 3:21 PM