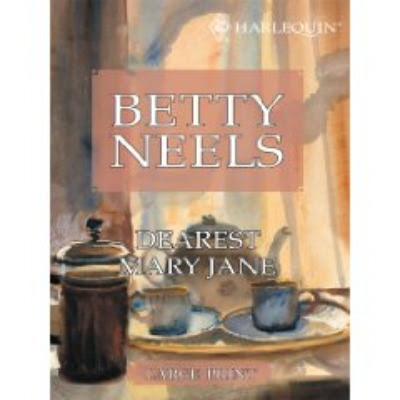 Hello, Darling Bettys!  I'm back from The Backpacking Trip of Doom, scratching madly at a wide array of mosquito bites.  And what a lovely book to find in my queue.  I enjoy this one tons but the part that gets me every time is when he buys the little mice she's spent so much entrepreneurial sweat on.  He can't just hand her a fiver to tide her over so he finds a hitherto unknown spot in the corner of his brain that always yearned for fabric rodents.  (I imagine him going mining for that spot with a pick ax.)
Betty Keira

Dearest Mary Jane doesn't qualify as my favorite favorite...but it's definitely in my top ten. Or twenty. It's a fairly gentle story...no big drama, just a series of scenes that make up a charming story.

Mary Jane Seymour...a thin Ariminta about 25 years old. With violet eyes, natch. Parents dead, natch. She has inherited a small cottage in a small village and is trying to make a living running a tea room. Mary Jane is one of the few examples of entrepreneurship in Neeldom. Sure one or two girls briefly work in shops...but I don't think any of them actually own their own business... there is a book with a failed attempt at a knitting shop, and another one who wants to start her own catering business...but doesn't. Mary Jane will never make it big in the Tea Shoppe business. You know what they say, "location, location, location"...evidently her small village is not the perfect location - it's a bit off the beaten track. She ekes out a fairly grim existence. She dreams of a new winter coat and boots. It would seem like she would be a bit of a wet rag...but she's not shy about speaking her mind plus she's got a good pitching arm. I forgot, she's got a cat named Brimble. 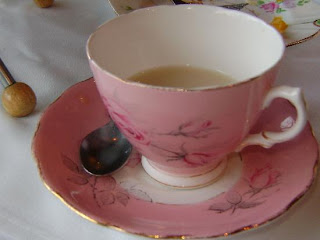 Enter Sir Thomas Latimer. Dr. Sir Thomas Latimer. An orthopaedist. My favorite kind of specialist. Orthopaedists fairly litter the Neels landscape. He starts out being an unlikely friend. He likes being with Mary Jane. We occasionally get a glimpse into his thoughts. He drives a dark blue Rolls and has a dog named Watson.
The Story: Mary Jane is closing up the Tea Shoppe, when in walks.....wait for it....Dr. Sir Thomas Latimer, plus one. The "plus one" is a petulant beauty (in her 30's). She would like her Earl Grey right now. Frankly, we can forget about her - she never makes another appearance. She has served her purpose...to achieve First Contact between the protagonists. Their next contact comes just a week later. Mary Jane is accompanying timid Miss Potter to the see the specialist in Cheltenham about some hip surgery. Yes, the specialist is Dr. Sir. Second Contact. Mary Jane gets "a look from icy blue eyes in which there was no hint of recollection." But now that he's seen her, he will see more of her. Miss Potter gets a letter informing her of her surgery date, with a request that "in view of Miss Mabel's nervous disposition, that the young lady who had accompanied her," blah, blah, blah...yes, Mary Jane will have to close the Tea Shoppe and possibly lose a chance to make a little much needed money. Third Contact - checking Miss Potter into hospital. Fourth Contact...Dr. Sir engineers a "chance meeting" while MJ is visiting Miss Potter, then he proceeds to give her a lift home. He begins to be intrigued...she is not like any girl that he's known. Duh. She runs a Tea Shoppe. Enter Evil Cousin Oliver. He wants MJ to take his wife, Margaret, to London, to see a specialist (he is wealthy...and yet he wants Mary Jane to close up shop and lose revenue...clearly not plugged into the financial realities of her life)...yeah, it's Dr. Sir again. It seems that fate just keeps throwing them together. Dr. Sir comes to the Tea Shoppe to tell MJ something, when in walks (cue dark sinister music)....Older Evil Sister Felicity...who is not felicitous. She is a successful model. In Neels terms that is tantamount to being a Spawn of Satan. She sees Dr. Sir and immediately asks him to come see her at A Dress Show in Cheltenham and then dinner...he graciously declines, but ..... ""The fool", thought Mary Jane fiercely. She had seen the [Spawn of Satan] capture a man's attention a dozen times....for some reason she had thought that HE was different." Spawn of Satan not so subtly pumps Dr. Sir to find out if he's making millions. MJ sends him away...without hearing him out. We never find out what he wanted to talk to Mary Jane about. Ever. Cousin Oliver dro 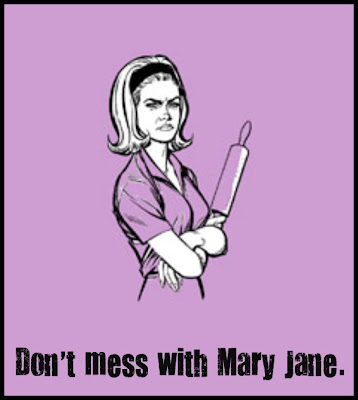 ps by to ask for an undeserved favor. "...go away, Oliver, before I hit you over the head with my rolling pin." That's a lovely bit of spunk. Dr. Sir happens to be driving by, and comes in - not to her rescue - Mary Jane is no Damsel in Distress. She doesn't need any rescuing from Cousin Oliver. Dr. Sir begs some breakfast, then invites MJ to spend the day with him in Oxford. Dr. Sir enjoys the day...but feels a vague pity for Mary Jane..."He must remember to mention her funny little tea room to his family and friends, drum up some customers for her so that she would have some money to spend on herself. A new hat for a start. No rain hat was becoming but at least it need not be quite as awful as the one she had been wearing all day." Let's take a moment here. This is a recurring theme in this book - wherein the Doctor is more concerned with the girl looking better than the girl herself is. Not that he looks down on her, it's just that she doesn't seem to even try. We'll get back to this...
Thomas stops by to visit MJ at the Tea Shoppe and finds it locked up tight - but faithful cat Brimble is looking worried...as only a cat with no litter box and a raging gale outside can. Thomas breaks in the kitchen window with the aid of his handy penknife and finds that MJ is delirious with the flu. He bundles her up and takes her to his mother's house. At mum's house he proceeds to play doctor, I mean, give her an exam. Don't worry, the housekeeper is there to keep things kosher. Thomas then proceeds to give Mary Jane a shot...in the backside. As a person that has had more than my fair share of backside shots I can sympathize with Mary Jane's startled yelp. I'd yelp too. Spawn of Satan uses MJ's illness to visit...she dresses in a sheath of vivid green (only evil women in Neeldom wear vivid colors on purpose, the hussies). The dress is short as to skirt, and low as to neckline. Mrs. Latimer considers it immodest.
Back in the Tea Shoppe after her bout with the flu, Mrs. Latimer stops by, with an old family friend...hmmm. Dr. Sir in a delightful bit of strategem, manages to get an old family friend who happens to be a mutual aquaintance to invite them both to a party. This party is the money scene. But I have a tough time with Mary Jane's outfit. That she puts together ON PURPOSE. Not only ON PURPOSE, but she sews the dress herself. The dress is dove-gray silk "a simple dress with a full skirt, a modest neckline and elbow length sleeves." She then adds insult to injury and purchases matching stocking AND shoes. This is her idea of a party outfit???I can't conjure up any flattering image...the whole concept seems very off-putting to me. Quite bleak. As Mame said "how bleak was my puberty in Buffalo" or, in Mary Jane's case, "how bleak were my twenties in an unnamed village close to Stow-on-the-Wold." And she did this ON PURPOSE. (I could see her on a future episode of What Not to Wear)Nevermind, here's the good stuff. Sir Thomas... 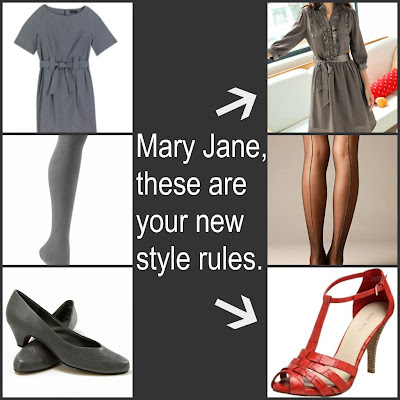 considered her dress suited her very well, although he surprised himself by wondering what she would look like in something pink and cut to show rather more of her person....a pearl choker would look exactly right around her little neck... Sounds like Thomas is more than a bit smitten. The best part is from his mother. "How pretty you look, my dear, and what a charming dress - I have never seen so many exposed bosoms in all my life and many of them need covering....I don't think your bosom needs to be concealed; you have a pretty figure, my dear." Oh dear! Sir Thomas stifles a laugh. "His mother, a gentle soul by nature, could at times be quite outrageous." I'm wondering how old you need to be to get away with statements like that. 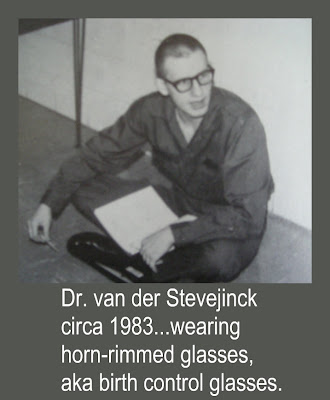 Misunderstandings ensue, Spawn of Satan implies that Thomas is spending time with her - which is only partly true...she kind of stalks him. Cousin Oliver muddies the waters further, Mary Jane is told point blank by him that Sir Thomas is marrying Felicity (in return, Mary Jane throws a handful of LARD at him), Felicity also says she's getting married. What's a girl to think? MJ reads Sir Thomas the riot act, he gives her a look of icy rage....and then they both figure it out. Spawn of Satan is getting her just desserts by marrying a rich American...who wears horn-rimmed glasses and a wide-brimmed hat. Thomas comes in, they kiss while the scones almost burn.

The girls in this book rock. Mary Jane is not only able to speak her mind and threatens her cousin with a rolling pin, she also kicks a biker who is part of a gang trashing her Tea Shoppe. You just know that Mrs. Latimer will be the perfect mother-in-law. After all she has her own place and seems more than capable of baby-sitting the brats when they come along. Evil Older Sister Felicity swans around in very outre couture fashion AND marries an American. The boys (few though there are) are fun too. Dr. Sir Thomas isn't smitten at first sight, there is a fairly natural progression here for both parties...Cousin Oliver is not a one scene character - Mary Jane gets three or four scenes in which to verbally and lardily spar with him.
Food: tea cakes, sausage rolls, beans on toast, shepherd's pie, "something fishy on a lettuce leaf", castle pudding, "cheese is good for the digestion" (really? I didn't know that.)
Fashion: Jersey dress, grim grey party dress, old winter coat, hideous rain hat.
Rating: Despite the grim grey party dress, I give this dress a queen of puddings...on the strength of Mary Jane's handy arm with the lard.
Posted by Keira at 8:21 AM