I know that most of you will take issue with me over my attitude in regards to Fabian (and not just his name) in Winter of Change. I really thought that for the first half he ought to be tossed off a parapet or something. It is for this reason, and for Cousin Mervyn trying to marry Mary Jane for her money that I recommend:
Suspicion (1941) 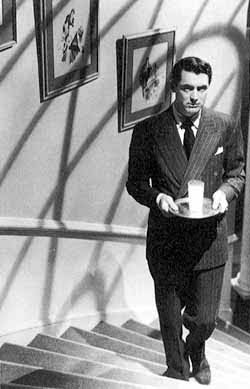 Now that we've sorted out the formalities--the will and the wedding-- how's about you have a nice glass of milk?

Where to begin? Cary Grant plays Johnnie (a sort of Fabian/Mervyn swamp thing) and woos a shy English girl--Joan Fontaine (rhymes with Mary Jane). He sees her on a horse (that is not sent off to the vet for wildness and a rolling eye) and asks for her hand. After their marriage, death follows Johnnie (just like Grandpa and Uncle but with more of a manslaughter angle), some really slippery bed linen is bought (seriously, she deserved what she got for putting Cary Grant in that ridiculous bedroom suite), and some old furniture is put in hock.
Like Winter of Change, Suspicion is a movie that could have been great but wasn't and it is more than likely that the hero will poison her in the end.

The Fateful Bargain. Let's see...Petulant invalid who needs to relearn how to walk?: 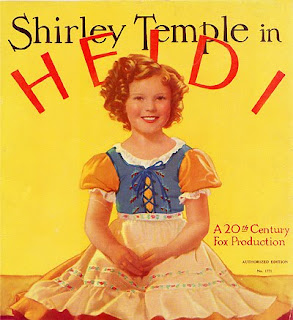 I'm a bit of a Shirley Temple fan. Sure, you might say that her curls are impossibly perfect but it's hard to argue with an eight year old that can carry a blockbuster on her two precocious feet. Can you name many full-grown stars today who could pull off the triple threat of singing, dancing and acting?
Posted by Keira at 5:00 AM