"She looked up then, straight at William, and smiled at him. It was the kind of smile Boadicea might have had on her face as she led the Iceni into battle." It's quotes like this one that raise The Girl With Green Eyes to a higher level than it otherwise might be at. 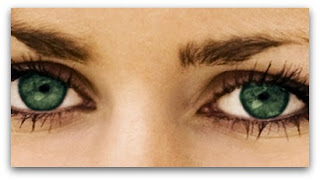 Older sister Imogen is junior executive material, younger sister Pauline, who is engaged to the pompous Cecil, works at a trendy art gallery, the kind that is frequented by rich Arabs. Their father is THE Gregory Lockitt, archaeologist, who travels the world with his wife. Lucy has been working in an orphanage for the past four years...which work is constantly referred to by her family as her 'little job'. With a family like hers, it's no wonder our girl is a bit shy.
Dr. William Thurloe (age 35) is a paediatrician who consults at City Royal Hospital, which is where he and Lucy meet for the first time...and fall in love. Lucy is there with hydrocephalic orphan Miranda. There is no mention of his family, but he does have a devoted couple, Mr. and Mrs. Trump, who work for him.
The Widow Seymour, aka Fiona, is a conniving woman who will never see 30 again. She would dearly love to be William's wife - and to that end is constantly grasping at him. T 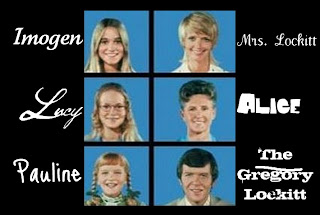 o William's credit, he really doesn't give her any encouragement. Lucy thinks to herself that Fiona is 'all gush and black velvet'.
Alice: In a very Brady move, La Neels has given us a perfect British take on the confiding cook cum housekeeper. Alice is more loving and protecting of Lucy than anyone else - a fact which William picks up on. When Alice gets excited she drops her aitches.
Act I:
Lucy falls in love at first sight with William - but very quickly sees what she perceives as competition - in the form of The Widow Seymour. By page 25 we get a glimpse of William's daydreams - which include a jumble of ridiculous thoughts...nurseries, rice pudding, children laughing....in other words, marital bliss with Lucy. Lucy and William happen to be on an approximately even social plane - and if you imagine their social circles as a Venn Diagram, you would see that they definitely overlap. Overlap enough to go to the same parties. Which is where they meet up again - outside the confines of orphanage or hospital. Lucy tries some plotting and planning - so that she can 'accidentally' run into William while he's walking his dogs. 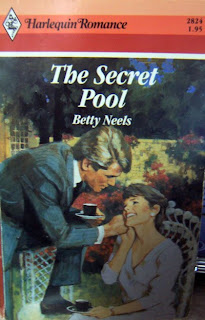 Act II:
Holland. The Venn Diagram overlaps a little more with the introduction of Francesca and Litrik. Cross-over characters from The Secret Pool. Fran shares a bit of revisionist history about Lisa...the little girl who was raised as her husband's daughter (but wasn't), and then DIED...and now they have a baby girl named after her. William went to med school with Litrik, Lucy went to school with Francesca (before she went to live with her three aunts).
Lucy dreams of doing something clever so that William will notice her.
Act III:
Back in England no one cares what Lucy did on vacation, it's all about wedding plans for Pauline and Imogen. The idea of having a large wedding is becoming less and less appealing to Lucy. Lucy goes out to dinner with Pauline and her pompous fiancee and his even more pompous brother at The Savoy. William and Fiona happen to be at the same restaurant (Venn, baby, Venn). Fiona is catty towards Lucy, twitting her about her single status. Lucy retorts with a bit of poetry by John Burroughs:
Serene I fold my hands and wait, Nor care for wind or tide or sea; I rave no more 'gainst time or fate, For lo! my own shall come to me. 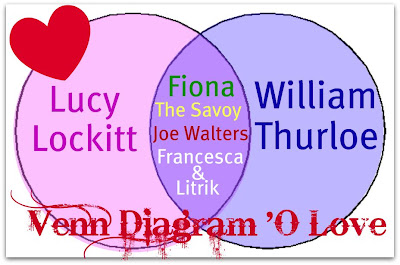 The fact that Poetry is Lucy's strong suit (this is not her first time spouting rhymes) and leaves Fiona floundering will become a crucial plot element later on...It's a good thing that William loves Lucy, otherwise this could have been a dangerous development. As it is, he finds her poetic abilities charming. Editor's Note: I adore this line from Pride and Prejudice about poetry and love: "I wonder who first discovered the efficacy of poetry in driving away love! Of a fine, stout, healthy love it may [be the food of love]. Everything nourishes what is strong already. But if it be only a slight, thin sort of inclination, I am convinced that one good sonnet will starve it away entirely." and now, back to our regularly scheduled programming...
It's time for a little action! The orphans get Legionnaires Disease!

This will require a boatload of overtime on the part of Lucy and ends with her getting to spend a few days back at City Royal with Miranda. William takes her home to his house every afternoon for lunch and a nap, which is quite sweet. Fiona drops in one afternoon and spends her time making barbed remarks to Lucy - which she wisely ignores. William is just perceptive enough to remark (after Fiona leaves) that the two don't like each other. Truer words, William, truer words...He then goes on to clearly explain that The Widow Seymour does not now, nor ever has meant anything to him, and by the way, will you marry me? Lucy needs a little time to think. The darling boy forgot to say the magic words. I love you.
Act IV:
After all the overtime Lucy has put in, she's given a week off. Goody, says Imogen. You can plan the welcome home party for mum and dad. She still hasn't given William an answer, in 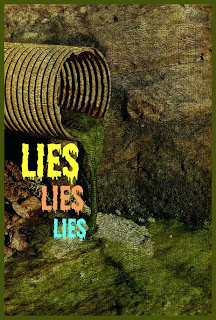 fact she has seen neither hide nor hair for days. He doesn't call, he doesn't write...surely if he cared...He doesn't even make it to the party, although The Perfidious Widow Seymour does. She makes a calculated gamble and tells Lucy that William is back at her place...for the weekend (which seems to have Brightonish overtones). This is not your garden variety muddying of waters, no, Fiona is pouring toxic waste directly into the River of Love. The Widow Seymour then tells William that Lucy is about to get engaged to young Joe Walter. He'd like to see Lucy about that, but she's gone into the witness protection program and is hiding out. Yes, Fiona and her tissue of lies has wreaked havoc.
Lucy gets let go from the orphanage - and is not even given the option of volunteer work. Her family is delighted that she free from her 'little job'.
At a party given by someone to honour her dad for something, William keeps an eye on Lucy - he notices that she isn't spending any time with young Joe Walter...he would like to talk to Lucy, but she's in full avoidance mode, so he writes her a note and asks Trump to mail it for him since he's on his way to Holland. Fiona stops by for one last try at him and sees the letter. While she's ready to admit defeat when it come 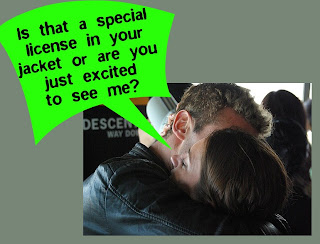 s to William (and run off with a wealthy, though unattractive American), that doesn't stop her from trying to spike Lucy's guns. The Thieving Widow stuffs the letter down her dress and then hustles over to Lucy's house and reads part of it to her - substituting her own name. William had gone so far as to quote poetry in the letter which was quite romantic, but lost on Fiona. Meanwhile, Trump has discovered the theft so he high-tails it over to Lucy's house and tells her that Fiona stole a letter addressed to her. Lucy immediately realizes that the poetry was meant for her, so she wangles William's schedule from Trump and flies to Holland!
She then borrows a car and driver from Fran and Litrik and tracks William down. Love is declared, kisses exchanged and then a small request from Lucy, 'would you mind if we got married before my sisters?' 'I not only don't mind, I insist'. The End.
Rating: I like so much about this book. Lucy is a regular girl. Sure, she's pretty, but she isn't vain about it - not with sisters like Imogen and Pauline around, and her mother - all of whom reinforce the idea that she isn't clever and doesn't make enough of herself. I like the fact that she's held a job for four years despite her family's derision. William at times is quite delightful - even though his characterization lacks depth (I am left feeling that The Great Betty just didn't flesh him out quite enough). The Widow Seymour is deliciously evil - her scenes with Lucy are some of the best in the book. After the review I did last week (When Two Paths Meet) with a hero that spends way too much time with 'the other woman', I'm glad that William is much clearer about his lack of intentions towards Fiona - and in fact has few actual dates with her. There is no earth-shattering action (for Pete's sake, they quote poetry at each other!), but in spite of - or perhaps because of that, the book mostly works for me. It helps that the ending of the book is quite adorable. Queen of Puddings!
Fashion: Sandals from Raynes that are cripplingly tight, rust velvet dress, mohair sweater in shades of green to match her eyes, brown velvet suit with Liberty scarf, amber silk with long full skirt and ruched chiffon bodice, grey dress that is elegantly demure - which she wears again and again because William likes it.
Food: Chopped egg and cress sandwich, Madiera cake, fish salad, lamb chops with new potatoes and green peas, chocolate mousse with orange, lobster tartlets, roundels of lamb, caramel mousse with a coulis of raspberries, grilled sole and spinach (because Miss Imogen wants to lose 1/2 a stone before her wedding), cheese tartlet, chicken casserole, mountainous cream cake, apple tarts, potato soup with out of this world flavor, creamed chicken, vol-au-vents with salmon mousse, shrimps chopped with scrambled eggs, petit-fours.
Posted by Betty Debbie at 5:00 AM

Email ThisBlogThis!Share to TwitterShare to FacebookShare to Pinterest
Labels: queen of puddings