The cover of this book is spot-on--down to the over-used leaf green crepe dress and sweater set. But the title? Gah. Romantic Encounter is not the name for this book. There is no particular encounter that earns the moniker 'romantic'. Lorry accidents aren't romantic. Attempted muggings aren't romantic. Spring cleaning ancient rectories aren't romantic. Flipping to any page at random (as I am doing now) and running my finger down a page willy-nilly would procure a more fitting title. So here I am on page 77 and we've got some contenders: Pressed for Time, Pleasant Plans, Remarkably Neat and Tidy, or Florence, Tartly. Any one of them would fit better. 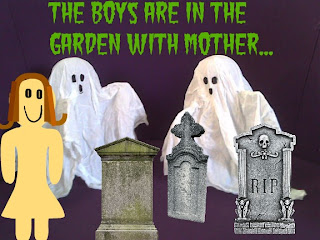 Florence Napier, 25, has been nursing her mother in the wild out-back of the British mainland for a year. She has other family also but for the purposes of the story, all you need know is that Father is an otherworldly vicar and the boys are nameless ghost-children that mother has made up out of whole cloth due to her protracted mental illness. Everybody humors her and pretends that they're in the garden or at boarding school.
Alexander Fitzgibbon, 36, is a 'chest' surgeon of some sort and offers Florence a job as a nurse in his private practice where he probably overcharges the Sirs and Ladies of the hoi polloi out of their inherited monies in order 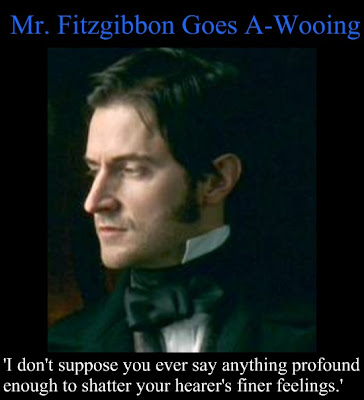 to finance his more philanthropic concerns. That's trickle-down economics for you...
Alexander is one of those If-I-say-jump-you-say-'How-high?' types and attempts to push Florence into the little cubby hole in his head marked 'Private Practice Nurse'. Florence notices him trying to manage her and begins her mind games posthaste.
'The time we agreed upon?' he asked silkily. 'I should warn you that I frown on unpunctuality.' 'In that case, Mr. Fitzgibbon,' said Florence sweetly, 'why don't you have one of those clocking-in machines installed?'
Alexander has 'lofty moods' and Florence can't pin down precisely why she goes to all the trouble to answer him back (especially as she's pulling down a nice paycheck from him each week) but can't help herself nevertheless. And then he goes and spoils it by showing facets of his personality that have nothing to do with the descriptors: smug, cold, icy, biting, etc.
They amputate a leg of a lorry driver and rescue him from certain death. I suppose that the wrong sort of marriage material would go to pieces and not know what to do with crumbling bricks and assorted industrial debris but Mr. 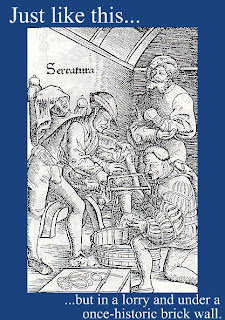 Fitzgibbon is shown to be the right sort of material as he begins chucking bricks over his shoulder and hacking off limbs...ah,...limb. One little one...below the knee. All his most lovely traits are on display (honor, bravery, humor, tact, kindness) but still no dawning realization.
All this bon homie is pushing her dangerously near The Cliffs of Passionate Partiality but Florence is pulled from the brink by the appearance of Eleanor Paton (one 't' in Paton. No relation to the take-no-prisoners WWII general and hardly any resemblance...) who breezes into the surgeon's rooms with all the welcome of an ill-wind.
And there we are on page 57 with the principle dynamic in place. Eleanor is pushy and needy. Alexander continues having moods but generally shows himself to be better than he seems (He has a clinic in the ghetto!) and Florence is increasingly impatient with his impersonal manner. She fetched his coffee and set the cup and saucer down on his desk gently, suppressing a sudden and surprising wish to throw the lot at him. She wasn't sure why...
They eat out together a lot, enjoy lovely conversation and have some mutual dawning realizations which you would be forgiven for thinking might actually matter. They don't matter though. (What?! But they're dawning realizations! It's a straight line from those to the alter!)
She has her actual, unchangeable, I-will-probably-be-a-spinster-forever-now dawning realization some time later while he is eating lunch with her family out in the country. And what do lonely nurses do with unrequited lo 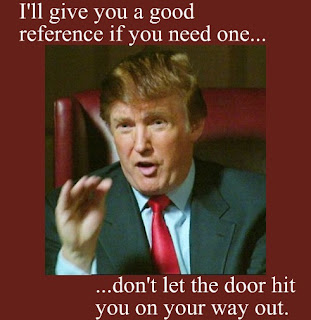 ve? They quit their jobs, roll those 401Ks over and find a new job in beautiful, remote New Zealand!
Alexander cheerfully accepts her resignation 'Splendid; nothing could be better, Florence, and you have no need to stay for a month--I'll let you off that. Go at the end of the week...I have been interviewing several likely applicants...'
He also offers to write her a reference. After a cozy gossip with the office secretary about how Eleanor the Cat is getting hitched to some factory owner in the Midlands (with a hairline as thin as his pocketbook is full, I imagine), just like that she's gone.
Because Florence's replacement is 'Mrs. Bates, a widow lady' (not Miss Bates, 36-24-36), you know that it is just a matter of time before he chases Florence down and kisses her shoes off in full view of the village church, store and school.
The End


Rating: This one is a bit of an enigma. I hardly remembered the plot at all in part because nothing huge happens. Sure, there's the bit about the amputation but even that is a very small wave on a very calm sea.
I like it quite well in spite of (because of?) that. The Venerable Neels has tucked little charming observations and real moments here and there throughout this gentle story.
I am a little annoyed by the fact that both of them have two dawning realizations each--it's rather like playing a game of Chutes and Ladders, two steps forward and one step back. But I think it also feels more real than a dramatic bout of measles so I'm not going to fuss too greatly.
It earns a boeuf en croute from me for the delightful chase Florence gives Alexander (The end is gorgeous.). I love how her temperature can be taken by what she's calling him: sir, Mr. Fitzgibbon or Alexander. He's really not as awful as all that (not for very long anyway) and she is peppery without being shrill.

Fashion: Florence meets Alexander while wearing her spring cleaning clothes--a duster over her hair and a boot lace making a pony tail. She wears a possibly subdued (but probably flirty) French navy jacket and skirt to her interview which sounds like something an up-and-coming State Department drone might wear to a foreign summit before being told that all the lifers wear pant-suits and a grim expression. While working, she notices that some people wear clothes difficult to change into and out of (ie. buttons from neck to waist or assorted drapes and layers). Also, she gets a lot of mileage out of a leaf green crepe dress with a square neck and matching jacket.
Posted by Keira at 5:00 AM