The Return of Betty. Chapter II

Aralucia looked up from her pretense of reading the latest Vogue to steal a glance at the professor who had buried his face in a Lancet the minute they took their seats on the hovercraft. He slid a sideways glance at her.

“Arcie, I hardly think that you’ll find anything in there to suit your, er, curves.” 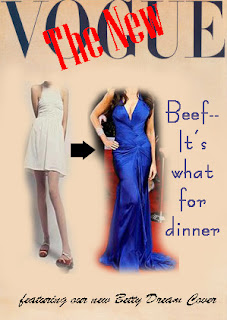 She raised an indignant chin in response, “How rude! You don’t have to remind me that I’ll never be a candidate for fashion modeling. And,” she narrowed her eyes, “don’t call me ‘Arcie.’ That kind of endearment is saved only for a beloved or betrothed.”

Arching an eyebrow in derision, “Don’t you mean beloved AND betrothed? Aren’t they mutually inclusive?”

She snapped back, “Haven’t you heard of a Marriage of Convenience?”

[It is here, Clever Reader, that I was dearly wanted to go with “Listen, Sister, I’ve been married, and it ain’t convenient!”—but suppressing my inner Groucho instead I went with:]

The professor gleamed beneath his heavily lidded eyes, “Although I have colleagues who tried out such nonsense, I view dressing room cots as beastly uncomfortable.

Email ThisBlogThis!Share to TwitterShare to FacebookShare to Pinterest
Labels: reader submission, the return of betty