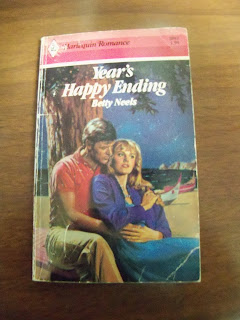 The thing that I remember the most about this book is that Peggy, in the fine tradition of RDD/RBD sisters, has no problem loading Deborah up with a teething baby and haring off for a day of entertainment.  It speaks ill of her future SIL helpfulness...Enjoy!--Betty Keira

First of all, 1984 represents La Neels smack dab in the middle of her writing career. She had been churning out about 4 novels a year for 15 years - so presumably she could do it in her sleep by now.

Here are some of the vital statistics for Year's Happy Ending:

•Heroine - Deborah Farley, 23 years old. She is a certified nanny (possibly the only "certified nanny" in Neeldom). Small in stature, but with a "pretty figure"...this will come in handy later on in the story...sandy hair, a plain face, beautiful green eyes with sandy lashes. Sandy lashes? At one point she wonders if her eyelashes would look funny if she dyed them. I'm wondering if Betty Neels ever dabbled in makeup? Hello...try some mascara! Her temperament is pretty much calm and pragmatic - except around Gideon...who flusters her.
•Hero - Professor Gideon Beaufort, 35 years old. he fits the Neels model, in that he is tall and large...but he's not Dutch - or a doctor. He is described as having iron grey hair and bright blue eyes. Iron grey hair at 35??? I guess it could happen. It sounds like he's some kind of professor of Economics...at one point he tells Deborah that he studies "the production and distribution of money and goods". That phrase sure sounds like something out of a textbook. La Neels pretty much slides past any details of his job (in sharp contrast to the specific operations that her Dutch doctors perform). He's a widower with a 10 year old daughter. He again fits the Neels model, in that his first marriage did not go well - and the unloving wife is gracious enough to die - after running away with someone else.

The story begins with Deborah going to act as emergency nanny to the Burns family (Mrs. Burn's mother is taken suddenly ill). Deborah is currently between nanny jobs, so she accepts. Mrs. Peggy Burns is Gideon's sister. The Burns family consists of 4 year old twins, Simon and Suzanne, and an impossibly well behaved baby, Deidre. This baby is placid to the point of being catatonic. Except for one day when she's teething.

As part of Mrs. Beaufort's (Gideon and Peggy's mother) recovery, the whole family flies down to Portugal. On a private plane. Of course. They meet Gideon and Eleanor (Gideon's daughter) there. When Gideon first sees Deborah in a bikini he says "Don't expect me to ever call you Nanny again."

Gideon begins his courtship of Deborah. He takes her to town and they listen to fado music and eat grilled

sea bream washed down with Vinho Verde. He asks her to marry her - so that Eleanor will be happy and have a mother...yes, a marriage of convenience, and yes, he's using a child as emotional blackmail. Deborah turns him down flat. " ...I'd like to have a husband who loved me and whom I loved, otherwise I'd just as soon stay as I am." (page 88).

Back in England, Gideon invites Deborah over to his house. "...[Eleanor] misses you - she'd rather set her heart on having you for a mother you know." More emotional blackmail. It's really rather sweet, mostly because he is quite open about it. She gets the grand tour, and then Gideon proposes...again. She turns him down. Again. He tells her that if she ever changes her mind, the offer still stands, "And I promise you that I won't ask your reasons.." (page 101).

Deborah realizes that she's fallen in love with him, so she drives over to his house and tells him she'll marry him. Two weeks later they are married - she wears a simply cut dress in fine wool, the color of clotted cream, with a heavier topcoat of tweed - since they will be traveling right after the wedding. Where? Holland, of course. By Hovercraft. With Eleanor. Gideon had some sort of conference in den Haag, so while he was in meetings, Deborah and Eleanor went out shopping and exploring. Evidently the place to shop in den Haag is "La Bonnetiere" (this particular store is mentioned time and time again in Neels novels). Gideon buys her a cashmere top coat...Neels men are always buying the heroines cashmere top coats - I wish my husband would buy me a cashmere top coat...

Back in England again, Gideon slowly starts noticing Deborah. He plans a weekend house party and tells Deborah that he'll take her up to London so that she can shop for some new clothes. Enter "the Other Woman"- Lady Barbara Inge. She's really not "the Other Woman" - but she'd like to be. Of course she's beautiful, glamorous, well dressed and witty - and divorced.

After spending the day shopping (at Harrods) Deborah returns home and models her clothes for Eleanor and Miss Timmis (Eleanor's elderly governess). Miss Timmis tells her that her evening dress is ravishing, even if rather revealing "Although as you are a married lady, an exposed bosom is quite allowable" (really? and if so, why? Discuss.).

Deborah takes the dogs for a walk one evening. The Jack Russell falls into a pond, she rescues it (ruining a new suit...which begs the questions: why walk the dogs in winter in a new suit????)...then she gets lost in the

dark. Gideon comes home, rescues her and then puts her to bed, after she falls asleep in front of the fire, snoring in a faint, ladylike manner (tired out from near hypothermia and medicinal doses of brandy).

Things come to a head - she admits that she loves him, he admits he loves her, they kiss, the end.

I really enjoy this story - possibly because the heroine is quite capable, calm and pragmatic. I give this book a rating of 8.5. That's a strong helping of boeuf en croute with a spoonful of queen of pudding for afters.
Posted by Keira at 8:00 AM