Jeroen mentions that everyone who marries in Delft has to visit the Steen Wedding Chamber (where the civil ceremony is performed):
Only civil marriages are legally recognized in the Netherlands.
The civil marriage takes place at a Registry Office (Burgerlijke Stand) and is performed by a Registrar of Marriages (Ambtenaar van de Burgerlijke Stand). A religious ceremony may follow the civil event, but this is optional. It has no legal status and may only be held after the civil ceremony has taken place.

Not to brow-pucker too much but if the State doesn't recognize religious ceremonies as having legal status than why the hubbub about whether they come before or after the civil ceremony? (In the interests of disclosure, I signed the certificate before the religious ceremony (I'm trying to remember when the witness scrawled their John Hancocks--can't for the life of me put my finger on it. It wasn't during my signing, I think.) but I rather like the British idea of retiring to the vestry to sign the registry after...)

At one point, Jeroen drags Constantia off shopping (much against her will!) and hustles her into Susan Small's.  '...while she was still drawing a surprised breath to protest, [he] asked a saleswoman to show his wife jersey suits.  Constantia, still struggling to catch her breath and making hideous faces of warning at him behind the lady's back, was swept away to the fitting room':  I can't find a basic website for Susan Small of London but she is listed (or, I suppose, since it's the name of a company it would be 'it') in directories for vintage clothes.  An image search turns up some wonderful pictures one of which is this little number (see left) in navy blue.

In Copenhagen she goes to see the statue of The Little Mermaid. The poor thing has had a rough go of it as it sits so near the harbor's edge:
﻿ 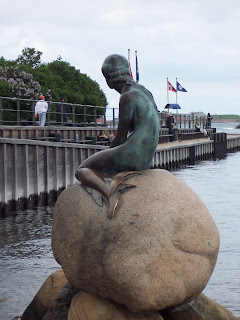 ﻿ In Cologne they stay at the Hotel Excelsior Ernst.  I liked one review on TripAdvisor:
Towels wonderful - best ever - large, soft, absorbent. One of us was unhappy with 'severe' nature of bathrobe, saying that it felt like it had been too long in a very hot dryer and was stiff and uncomfortable.
In short, wonderful service but skip the breakfast...
Posted by Keira at 5:00 AM