When Betty Debbie and I sat down to divvy up reviews there were a few titles that we fought over.  Caroline's Waterloo was hers, Winter Wedding was mine, The Little Dragon was...Elbows might have been thrown, Bettys. We both love it.

Constantia Morley, 26, has to recite the Hippocratic Oath backwards, forwards, standing on one leg, in Latin, in one continuous burp, in a house, with a mouse, here and there, anywhere...to daily prevent herself from lifting her patient, Mrs. Dowling, a gilded, diabetic butterfly earthworm, and pushing her over the ledge of the window to meet her death some three stories below.  So, yeah.  You might say the job is no peach and she escapes when she can.
It is on one of these smiling-so-hard-her-cheeks-hurt excursions into the city that she comes across Mrs. Dowling's doctor who is speaking with Jeroen van der Giessen, 39.
So, they go on a speed date.
Sure, there's no timer or basket of pretzels or hoards of anxious singles but in less than two minutes she knows that he has a battered sheepskin jacket and a more battered Fiat (which all indicate that he's still paying off his student loans) and he knows that she is cheerful and charming and The One for him.
Over the course of the next couple of weeks, he manages to annex her scant half-days, filling her lonely hours with the liveliness of a houseful of children (three--on loan from his sister) and the invigorating joy of each other's company.  (That's a main vibe from this book.  They are bursting with good humor and mutual appreciation.)  They meet for tea at his house--a magnificent old mansion...owned by a relative. (Constantia paints in the details--he's an elderly Uncle with more money than sense.) In no time they are firm friends even if Constantia has a bit of a one-track mind on the subject of The Unrelenting Awfulness of Rich People (maybe she's writing a thesis).
The only doggy-doo-doo in this paradisaical garden is Mrs. Dowling--making her pungent accusations ('You're out to get him.') and biting insinuations ('Him--he hasn't any money.').
Editorial Note: Mrs. Dowling is the reason, for me, that the whole plot works.  While it is no surprise that her disagreeable nature (even in the face of outrageous luxury) exacerbates Constantia's irritations with wealthy people (thus supplying the reason for all of Jeroen's subterfuge), she is also the reason (I think) that Constantia fails to see Jeroen in a romantic light.  Over and over again she crudely twits Constantia about chasing Jeroen--putting the ugliest construction on the relationship--so that it isn't any wonder that Constantia responds by defending her good, noble and passionless FRIENDSHIP.  She is so busy insisting that it isn't the crass relationship of Mrs Dowling's fevered imagination that she fails to allow any romantic feelings to cross her mind.
Finally, the caramel chocolates hit the blood stream (so much more tasty than 'the rubber hits the road', no?) and Mrs. Dowling has a diabetic tantrum (sure it's a medical possibility...) and fires her nurse.  (When she says, 'I shall go into a coma,' you really wish she would already.)  Well, you know the rest.  Constantia with the broken purse straps in the ghetto...
Enter Jeroen with a really lovely idea.
She decamps to his house and plans to take some of the crushing work load off of his daily help.  (How does that woman keep everything clean and cook for a sizable group each day?)  She is worried that she'll be another mouth to feed.  (Okay, if you have major problems with this plot than I'll hand you a little bone:  I agree that it is silly beyond permission that she thinks he is that poor based on an old coat and an affordable car.)  She and Rietje (the cook) get along like a house afire and Constantia potters around, making beds, getting the children off to school and feeling (for the first time in a long time) as though she isn't a rootless orphan.  Sealing the deal, he teases her gently about being a kindly little dragon in his home. 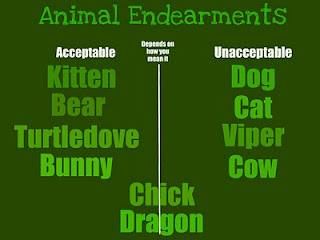 Editorial Note: I know, here, some Bettys will take issue with my conclusion but I'll refer you to my handy chart.  (See right.)
Jeroen is quick to assure her that she will meet the awesome uncle whose sumptuous bounty she enjoys eventually and allows her a few details about him.  'He's a rather lonely man...'
Eventually her passport is found, causing no small degree of consternation to the Professor. (Oh, did I forget to mention that?  So did Jeroen.)  And you feel really sorry for him.  There he is with the love of his life acting like a Donna Reed-ian prop and mainstay and he's got Rietje and Tarnus (Oh, did I forget to mention him?  So did Jeroen.) ferreted away in the garret like members of the Dutch Resistance (coming out at night to scour the mansion from top to tail) and he's weaving a carpet of lies that could cover the ballroom floor.  It's a wonder that he doesn't take to smoking.
So he does what any red-blooded male would do--he proposes a marriage of friends (not of convenience--she doesn't need to stay in Holland anymore and he won't need help with the kids for long but he doesn't want to let her go and he's not going to rush her into future-tense conjugal relations).  After a remarkably short dithering time (like two minutes!) she agrees.
They travel to England. 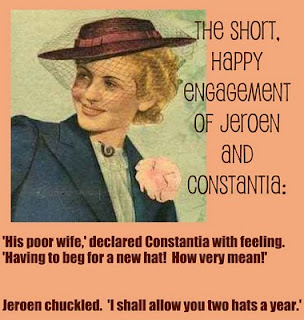 Editorial Note:  I generally don't like the tiny don't-invite-the-family weddings of Neelsdom but in this case it's enormously thoughtful.  He has a massive family (she has none) and she's in a foreign country.  He asks her to name the church and they get to skip the awkwardness of having the chapel filled with his family and his friends and no one at all for her.
While there they have a darling little honeymoon.  He takes her out to a fabulous hotel and wines and dines her and drags her into an expensive boutique.  She's terrified that it'll wipe out his bottom line while he is relieved to finally let go a little bit (restraining himself mightily from endowing her with all his worldly goods).
'And thank you too, Jeroen, for quite the nicest wedding day any girl would have.'
Her hand was in his and just for a moment his grip was so fierce that she winced...
I imagine that he had to duct tape himself to a chair leg all night to prevent himself from flinging himself at her.

Life as a married woman is delightful and she soon meets Jeroen's sister Gina (one of the most likable siblings in the canon), mother of the kids, and more of his other relatives, all of whom are 'completely uncurious'. Things float along like this for a bit, the lies are piling up like sausages at a beer-fest and they do a spot of comradely first-responder-ing at a whirlwind-struck factory...you know, just your standard getting-settled-into-married-life faire.
And then one day, after being married less than a month, they attend a dinner party hosted by the kind of woman who only reinforces Constantia's feelings about the Dread Wealthy.  She corners the new bride and begins an inquisition.  My, how lucky you are. (Yes, she is. Constantia knows she loves her husband by now.  Being crushed by him during the whirlwind knocked some sense into her.) You have snagged a baron.  And he's a m...Gina dumps her coffee down the woman's back in a move that, to a shocked Constantia, was clearly intentional!  (I nominate her to come to every family reunion I have to attend...ever.)
There isn't a fight.  When Jeroen gets his bewildered and angry wife home he takes his medicine like a man:
Yes, I am a baron.
She was going to say millionaire.
Her hurt is beyond anything a yelling match would solve and so she dashes upstairs to cry her eyes out and pack her clothes. 'You let me shop and answer the telephone and dust and put the children to bed...'
It helps that as she strives to write an appropriate 'Liar, liar pants on fire' letter the next morning he is surely busy in his surgery.
But he isn't...and don't call me Shirley.  He has a partner.  (Oh, did I forget to mention that?  So did Jeroen.)
His castle of lies comes crashing down and in the rubble a new truth rises like a phoenix from the ashes.
The Baron is occupied.
The End

Rating:  Though I understand that it doesn't find favor in all quarters, I really, really love this one.  It's got a great title and a memorable plot line.  Granted, the grand mansion of our novel is constructed on a flood plain of lies (wicked lies) but if you can swallow the fact that their relationship is built on a tissue of falsehoods and also believe the reason for them, then you're good to go.  (Which I do and I am.)
The principles have such an affection and appreciation for one another--it drips off the page practically (don't dribble)--and I'm one of those that think that his repeated use of 'dragon' is an endearment of the most personal kind.  (He can't call her sweetheart and darling so this will be the next best thing.) A very close reading bears out that she never takes exception to the name and it's always delivered with grins and smiles and good humor all around.  (So if you want to go a few rounds of fisticuffs on the grounds that it's unforgivable and always insulting to call a woman 'dragon' then I'm afraid your beef is with The Great Betty and not with me...)
Anyway, it's a great novel that rarely has to stoop to the contrivances of flinty-eyed, bony-chested tartlets flinging their arms around the hero or some flirtatious long-hair mucking up the landscape to provide drama.  (Instead, we get every moment of tightrope-walking as the well-run household has to make its machinery invisible that has all the makings of a very British bedroom farce.)
Lashings of Whipped Cream for me.  (It's easily in my top five.) Go ahead and rip away in your most well-bred way, dissenting Bettys.

Food:  Mrs. Dowling becomes very disagreeable over not being allowed to consume Vienne snitzcels and eclairs, ODs on a box of chocolates with caramel centers and is anxious to have escalope of veal ('followed by a diabetic coma,' responds Constantia...).  Constantia thoroughly enjoys the substantial teas at Jeroen's home with bread, butter and jam.  She compares Jeroen's Moselle to her aunt's parsnip wine, and enjoys (post-marriage), lobster soup, millefeuille.

Fashion: Jeroen's old sheepskin jacket and beautifully tailored suits.  Constantia wears a Marks and Spencer sweater, a brown corduroy pinafore dress with a pink woollen blouse, a sapphire velvet skirt with matching waistcoat, and her wedding dress is an 'already owned' tweed dress with a new hat (which I think she limits herself to so that she could pay for Jeroen's wedding ring--which I just adore her for), he pops for a pale coffee jersey skirt and blouse and a crepey and pleated dress (his words) in dim strawberry.  She also gets a pearl grey (I love that on this blog I don't have to remember which way American's spell grey/gray and that either way I do it will be correct.  (Yes, I know it's American/gray.)) organza dress with tiny pink embroidered flowers and a little white mink jacket.
Posted by Keira at 5:00 AM