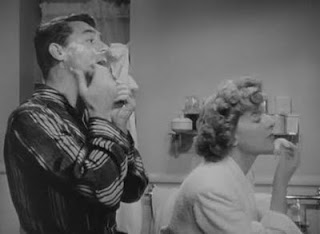 If there is anything I love more than Cary Grant, it's probably Myrna Loy.
One review says, "The type of humor here is something that everyone can enjoy because, even if you haven’t built a house yourself, the emotional focus is on attempting something that seems to get more and more difficult as the days go by. We all have those goals in our lives – probably more than one – and we can all remember the feeling of seeing the end of a project on the horizon only to be told that a major complication will push everything back or not allow us to do things the way we want."  I spent forty minutes one day this week (on the nicest day in an age!) NOT driving my daughter to her softball practice.  We were like one of those Discovery Channel scare-the-suburbanites shows where a real-life couple take a shortcut through a snowy forest and, through a series of misadventures, wind up on the brink of death. I felt just like Mr. Blandings.


In The Doctor's Girl, Loveday and Charlie take a trip to Brighton which is a town that always struck me as giving off a kind of Atlantic City boardwalk-y vibe...which is just enough to recommend:

Wild Hearts Can't Be Broken (1991)
Yes.  The movie has flaws.  The title is about as awkward as a handlebar mustache during the soup course.  It tells the story of an obscure side-show act. No one acts very well in it. And yet...Gabrielle Anwar is engaging.  The story is a universal one of courage in the face of terrible odds.  And then there's Michael Schoeffling's turn as 'Al' the love interest--his acting is just rotten and not for nothing does his wiki page have an entire segment titled "Life After Sixteen Candles" (wherein he played desperately hot Jake Ryan) but he's one of those people who prove the saying, 'A thing of beauty is a joy forever' and expecting Jake Ryan to act is like asking the Venus de Milo to tap dance.  It's just not done.

*For Valentine's Day in 2004, twenty years after the film's American premiere, the Washington Post ran an article entitled "Real Men Can't Hold a Match to Jake Ryan of Sixteen Candles". On set Schoeffling used risers in his boots to appear taller than Ringwald and the other actresses in Sixteen Candles. Schoeffling stood 5'8" and several camera angles were used to give the appearance of a 6' tall jock. Schoeffling never duplicated the success of Sixteen Candles, and in various magazine and newspaper interviews stated the lack of roles and a growing family to feed were his reasons for retiring from acting. He now lives with his wife, Valerie L. Robinson of Virginia, also a former model, and their two teenage children Scarlet and Zane, in Newfoundland, Pennsylvania, producing handcrafted furniture as the owner of a woodworking shop.
Posted by Keira at 5:00 AM