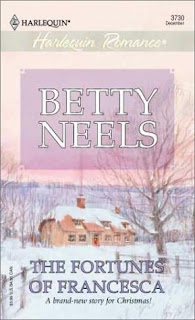 I can't believe this is my last review. I was a little nervous about doing The Fortunes of Francesca - I know it's not a universal favorite (as if there is such a thing!). There are no 'other women', no pet rescues, no adorable kiddies...the romance is really long in coming...despite all (or perhaps because of) that, I adore this book. Adore it. Let's dig in.

Francesca Bowen (23) is sorely in need of work.  She's had two years worth of nurses training, that and a dollar bill will buy you your hearts desire (as long as your heart only desires things from the dollar store).  She's the breadwinner of a family that includes, a) her aunt, Mrs. Blake and b) her younger brother (and medical student), Finn. Auntie can't work (health issues), and Francesca and Auntie won't allow Finn to work. Their household is oddly devoid of animal companionship.

Francesca answers an ad seeking a 'girl Friday'. Lady Trumper is not willing to engage her, Francesca is not deemed suitable. She is however, suitable enough to do a spot of heroic rescue work in Lady Trumper's kitchen wherein Elsie (a servant) is bleeding from a nicked artery. Professor Marc van der Kettener (35) is impressed with Francesca's sangfroid-i-ness. It's not every day that you meet a small mousy stranger who's that cool in the face of adversity. 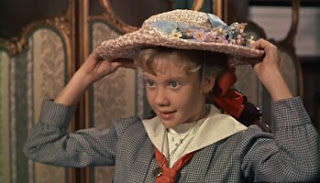 Working for Lady Trumper is not particularly fun, but Francesca manages to spread a little sunshine, endure what must be endured and enjoy whatever little pleasures are offered - and she's a pro at recognizing the good things in life. Editor's Note: If you don't like characters like Pollyanna, you probably won't like Francesca - she seems to go through life playing The Glad Game (see first paragraph of the plot summary on wiki if you're not familiar with this game).
The Professor sees Francesca walking down a busy street - so he pulls over and picks her up.  She's her usual outgoing self, but he's not sure what to make of her.  It's like she doesn't have an off switch.


'I trust Lady Trumper doesn't have to listen to your chatter?'
'No, no...I speak only when spoken to. Sorry to have bored you, but you did look like the kind of person one could chat with.

I'm not sure that you could call the Professor a kindred spirit - at least not when it comes to chatting, but he is intrigued by Francesca's indomitable spirit. When life hands her lemons, she doesn't just make lemonade, she makes a friggin' lemon meringue pie.

What kind of medicine does Professor Marc specialize in? He's a heart surgeon, that's what. In Neeldom, where heart surgeons flourish, can heart attacks be far behind? Nope, they can't. In this case, the revelation that Marc is a heart specialist comes only 4 pages before Auntie has a heart attack.  It's clear to Francesca that Auntie will need more supervision when she leaves hospital - so Francesca starts to contemplate getting a new job working the graveyard shift - she'll just have to forgo sleep for the foreseeable future.

Franny, being Franny can't help but be forthright.  When Lady Trumper discloses her unethical bill paying strategy, Franny corrects her.  Faster than the grass is growing in my front yard (the van der Stevejincks have an embarrassment of lush greenery at this time of year), Lady T sacks her. Francesca isn't overly fussed - after all, she was planning on quitting in a few days. Lady Trumper threatens non-payment of wages, but Franny very reasonably counter-threatens to take her to court.

The Haven in Pimlico. It sounds to me like a place where old racehorses are put to pasture - which is sort of what it is.  The Haven is a small rest-home/geriatric facility, conveniently located only a short bus ride from Francesca's home on Fish Street. The pay isn't great - neither are the hours, but at least it's a job.  At least it's a job right up until Francesca slips and sprains her ankle. Then loses her job. The little household is firmly wedged between a rock and a hard place. There's simply not enough funds to go around. Truly the low point for Francesca, Auntie and Finn. If only the Professor was around to chat with...
﻿﻿
﻿﻿ SirWilliam Meredith, the Winged Nazgul of Opportunity comes a-calling. He offers a home to Franny and Auntie. Francesca has grave misgivings, but what's a breadwinner to do, when she can't earn any bread?  Uncle William has spent his life planning revenge and simply can't pass up such a rare chance to get back at his sister and the daughter of his other sister.  If he had a mustache, it would be twirling like a cordless drill with a new battery. Things are looking dire for Auntie - no medical attention, no money, no home of her own - and a brother who would just like her to die ASAP. As for Franny, Evil Uncle plans for her to be an unpaid servant for the rest of his life - and not receive a penny piece afterwards. Where, oh where, is the Professor...?

He's back in London and Franny is on his mind, but where is she?  Not on Fish Street, that's for sure. She's gone without a forwarding address. The Professor is not without resources...and by resources I mean Finn. Finn has been uneasy about Franny - her letters don't sound like her. The two men cook up a rescue plan. Leaving at the crack of dawn, the men drive down to Dorset and beard the dragon in his den. Uncle William doesn't care if they take Mrs. Blake, but for some reason he feels that keeping a 23 year-old niece is his right. The Professor says, I have that right, we're to be married. Franny just about swallows her tongue - but Finn shushes her - leave it to the professor.  Auntie is dropped off at the hospital and Francesca is to stay at Marc's place.
The wedding is, of course, by special licence.  Finn and Auntie along with Mrs. Willett and Crisp make up the wedding party.  Then it's off to Holland for a bit. Marc admits to himself that he is getting fond of Francesca. He thought of her often and with pleasure. He drops her off for a day of shopping in Den Haag, but neglects to give her any money.  Francesca is resourceful enough to survive the day with ten pounds in her purse - enough for morning coffee, a sandwich for lunch and the entry fee for the Mauritshuis.  Not enough for a trolley ride all the way back to the hospital.  Marc is a little put out that she is late, until he finds out why - then he grovels quite nicely. Franny, being Franny doesn't hold a grudge about it.

Marc has to go away for a few days - he leaves Franny at their home in Holland. She misses him, but more importantly, he has been looking forward to coming home and finding her waiting for him.

Back in London Marc tells Francesca that they are going to a dinner party at Lady Trumper's. No! says Franny. Yes! says Marc.  He's not ashamed of her.  Franny finds her friendly salesgirl at Harrod's and together they find The Amber Chiffon Dress of Destiny.  It turns Franny into a stunner. Marc is somewhat gobsmacked at how pretty she is. She can see the unspoken compliment in his eyes, which helps carry her through the cocktail hour.  Lady Trumper can't help but be spiteful and rude about Francesca - to Marc, who won't stand for anyone to insult Francesca.  He invents a medical emergency and takes Francesca out to dine and dance.  Editor's Note: Marc has been very gradually leading up to falling in love with Francesca - I think this evening is the critical eye-opener for him. He's still not quite ready to admit it to himself, but he does very soon hereafter.

Marc has to go to Israel for a week or so. On the brink of leaving, he nearly confesses his love - but is interrupted. Dang. There's just time to give Franny a kiss.

The final scene is as cute as it is short...
Future pledges of affection are discussed.
'...Two of each, said Franny, then they can make up a tennis four.'
'...At least you don't hanker after a cricket eleven.'
The End.

Rating: If you were hoping for a love story, The Fortunes of Francesca might disappoint. It doesn't disappoint me.  I adore Francesca.  She's such a fun character - indomitable, chatty, cheerful - a glass half-full kind of girl.  She's not entirely sweetness and light - she does have a fierce side.  I love her when she's calling bad Uncle William a tyrant. I love her when she shares a few truths with Lady Trumper - and is willing to do so even in the face of being sacked. Brother Finn is a surprisingly consistent character - in many of Betty Neels other books, he would have barely rated a mention - but in The Fortunes of Francesca he hangs around for an unusually long time. It's rather adorable that he has a bit of a man-crush on Professor van der Kettener.  It's also adorable that while he thinks the Professor will make Franny a good husband, he also hopes that Franny won't be pig-headed about it. Marc is a fine hero - but let's face it - the story is not really about him...Francesca steals the show each and every time she makes an appearance. Marc will spend the rest of his life see-sawing between a wish for peace and quiet and wondering how he ever got so lucky as to be married to Francesca. Lashings of Whipped Cream!
Food: Eggs, bacon and fried bread, fish and chips supplied by the Professor, steak and kidney pudding (twice), tea and crumpets, 'warm milk laced with the best brandy', fairy cakes, sprits, roast pheasant, red cabbage and a rich pudding with whipped cream. Franny makes three kinds of sandwiches - Gentleman's Relish, cucumber and egg and cress.
Fashion: navy skirt with a white blouse topped with a navy cardigan, a sodden woolly hat and a mac that clings damply, TWO pre-wedding shopping trips to Harrods - fully financed by Marc! At her first post-wedding dinner party she wears a dark red velvet dress. To go to Lady Trumper's dinner party, Francesca splurges on the Amber Chiffon Dress of Destiny that pretty much stops Marc in his tracks.
Posted by Betty Debbie at 5:00 AM

Email ThisBlogThis!Share to TwitterShare to FacebookShare to Pinterest
Labels: lashings of whipped cream