No Betty Heroine Was Named 'Sabrina'

Although I do associate 'Tabitha' with 'Sabrina.'  Oh, I just realized why. 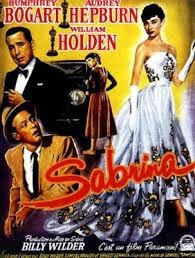 I watched the 1954 movie Sabrina quite recently, for the first time.  I of course adore Mr. Bogart, and Ms. Head, and the Watchacallit Estate setting was lovely.  However, as a romance, this story fell splat on its face for me.  Perhaps you have a different view.  If so, I'd love to read it.  Let me detail my confusions regarding how love came into the thing:

1)  Sabrina loves David, or thinks she does, and her friends in the servants' quarters seem to cheer her on.  Huh?  Everyone knows he's a worthless ne'er-do-well.  She rarely even talks to him, so her crush is based primarily on his looks and a rollerskating lesson ten years ago.  And then she heads off to Paris, spends two years meeting other people there, and her crush survives?  Why?  What?  How am I to sympathize with this woman?

[Betty notes:  David is not even a registrar!  He is clearly Adam ter Brandt or Laurens van Amstel, and should be shipped to Pittsburgh, though the Larrabee family idea of Bozeman or Butte is worthwhile also. Further, Christina and Serena (Both rhyme with Sabrina.  Hmmm.) have psychologically-demonstrated reasons for maintaining their crushes with worthless n.d.w's long past the sensible expiration date.  If your w.n.d.w. is nearby, alternately criticizing and praising you, taking you to tea and standing you up, your crush may never die.  We get hooked harder by inconsistent reward than by reliable reward.  Try it with a rat and some food pellets and a little button sometime.]


2) David loves Sabrina, or claims he does.  This is based on seeing her in a seriously pencil-cut skirt suit with something perilously close to a turban on her head, and in an admittedly awesome ball gown, and dancing with her very briefly.  Even if he (thrice-married) acts on his infatuations in a manner detrimental to the marriage vow, she can't believe he loves her on the basis of two good outfits.  C'mon!


[Betty notes:  Sure, we sometimes fall in love at first sight, but if so we jot a reminder to marry her in our small leather notebook, or resolve to put him out of our minds unless that fiancée proves as poisonous as she looks.  We do not immediately announce our feelings to the object thereof and start planning an elopement, especially if one of us is engaged to be married already.  And yes, I know Betty believed in the power of a great outfit, but a true hero knows his beloved would look lovely in a potato sack.  This is worth bearing in mind.]

3)  Linus loves Sabrina, and she loves him.  This is based on his having been overworked for three decades, and her feeling cossetted by him as he deviously plots to detach her from his brother, and her mild pity for him, which is based on a complete lie he told as part of the devious plotting process.  I give them six weeks, tops.  Actually, since it's a little based on his being Humphrey Bogart, I give him six weeks, tops, while she moons around for years wondering what outfit will get him home earlier.

[Betty notes:  I do not see any helpful pointers in the oeuvre for this fantasy or incipient train wreck.  Or both.]

4)  The voiceover tells us the Larrabee parents married in 1906.  The movie was made in 1954.  So they've been married 48 years, and had two sons.  Assume it took them eight years to pop out the first; he's still forty.  The younger has been married three times, and single for several years, so I don't see how he can be much less than 35.  (William Holden was about 36 when they made the movie; Humphrey Bogart about 55.)  Sabrina is 20 when she returns from Paris.  ICK!!

[Betty notes:  Mary Jane and Fabian are 22 and 40 during their Winter of Change, and they are the ickiest couple in the canon.  Heroes are typically about 12 years older than their [future] wives.]

Does this movie work as a romance for you?  Porquoi, as Sabrina would say?
Posted by Betty van den Betsy at 10:08 AM