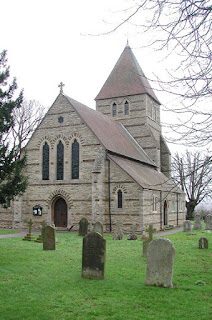 I was thinking of A Secret Infatuation the other day.

By the afternoon the drizzle had ceased but the mist was as thick as ever. It was almost teatime when the Reverend Mr. Watts phoned. He had a small house on the other side of the village, perched off the narrow road on the steep side of the open moor, no distance away but awkward to reach, some way away from the first of the village cottages.
Eugenie, listening to his anxious voice, felt sorry for him. His cold was worse, he complained--if only he had some cough lozenges or even a lemon, and he had finished his aspirins.
"I'll come over with whatever you need," said Eugenie, cutting short his unhappy complaining.

There was a message for her when she got back home. Could she go and see the Reverend Mr. Watts about the Mothers' Union and the pram service and could she at the same time bring him some more aspirin?

Eugenie is just doing what a church lady do. Other heroines in the Canon bring flowers to the church or organize lines of Sunday School kids or host stranded travelers overnight because the Rectory is so massive and wash out large tea urns all in the normal course of church-y events.

I really relate to La Neels's church ladies. I belong to a congregation that exploits free labor puts one to work and over the years I've been a pregnant and nursing Cub Scout leader, Sunday School teacher, on the activities committee, president of the women's auxiliary, etc. Right now I have two jobs (never the flowers! Why don't I ever get the flowers?). For one of them I teach a class one hour a month on an assigned topic for an adult class of 30-ish people. The other is called 'Compassionate Service Coordinator' and I facilitate all the serving that needs doing. This means that at any given time I'll have a text on my phone that someone just had a baby or had surgery and needs meals brought to them or rides to the hospital or temporary childcare.

Anyway, I think it's made me wiser about my own human nature--how happy I can be when I've really done some good. And how hard it is to pick up the phone when I know who it is and what they'll need and how much time it will take.

Does anyone else have any fun church (or other secular service organization) service stories to share? Times you've been pressed into service like Eugenie up there?

Goals and the Making of Them

It's the first Monday of the New Year and the van Voorhees family will be doing what we always do: Reviewing last year's goals and making some new ones.
La Neels was probably that sort of girl herself. She has Caroline (Caroline's Waterloo) resolve to learn how to ride a horse. Eleanor (Roses for Christmas) makes a whole list of things she would like to have--and surely some of them would change her life. Lucy Lockitt (The Girl With Green Eyes) practically makes a campaign out of conquering the heart of her fair hero. And then there is the clever, disciplined and AWESOME Laura (A Hasty Marriage):

As they walked back, Reilof observed: "It would serve everyone right if you were to turn up in bridal finery and a dozen bridesmaids behind you." He looked down at her thoughtfully, and she thought that he was really seeing her.
"You don't look as old as you are," he told her kindly, a remark which left her seething, although she thanked him in a colorless voice and bit back the retort ready on her tongue, while a resolve, a little vague as yet, took shape in the back of her head that one day he should eat his words...

Does anyone have any New Year's Resolutions they would like to share? Strategies for success? Worthy ones that were not pulled off?
Posted by Keira at 5:10 PM 9 comments:

The Greatest Fantasy Element in Neelsdom

The Canon of Betty Neels contains many elements which, though not wizards and fire-breathing dragons, have just as much improbable magic in them.


But the element that surprises and delights me more than most has to do with the pets. Whenever the two households (lady and gentleman) become one, there is the sticky issue of "How will the pets get along?" to work out. Betties, THEY ALWAYS DO.

I do recall one instance (but not the book, darn it) where a new cat was given a swat on the face from an older, more established cat before learning his place in the pecking order and taking to it at once but most of the time it's even more seamless than that.

In 'The Promise of Happiness' (or 'Becky and the Baron (the Hot, Hot Baron)') Becky has to entrust her two beloved pets (Bertie and Pooch) to a near stranger for weeks at a time. Will they settle down? is the anxious question:

He put a hand on her back and swept her along and through the baize door, down some steps and into a large kitchen, equipped to the last skewer and still somehow looking delightfully old-fashioned. There was an Aga stove along one wall and on the rug before it were Bertie, Pooch and a Great Dane. All three animals turned round, half asleep, and then bounded to their feet and rushed across the kitchen, the Great Dane to hurl herself at the Baron, Bertie and Pooch to cover Becky with joyful licks, pushing and shoving her in their efforts to greet her properly after such a long time. She sank on to the floor and let them have their way while the tears ran down her cheeks...

The three animals seem to get on like a house on fire and in none of the calls from Becky to the Baron, over her weeks of absence, were mentioned litter box mishaps or antique William and Mary settees ruined by claw marks or soiling.

Betty Kylene (whose heart is made of butter) found herself adopting a stray black cat a few months ago. Of course the cat was pregnant. Of course the cat and her other cat fight like brawlers. It's been fine since one was an indoor cat and the other was an outdoor cat. But did I mention the heart like butter?

The winter is cold and the outdoor cat is loveable so she's resorted to a baby gate to try to acclimate the two factions to one another. It's going to be a process...

Have you any experience blending pet families? Successes? Failures?