Cruise to a Medical Emergency

I was driving Pledge Five off to preschool this morning and was listening to the news on the radio about a man bleeding internally on a cruise ship off the coast of Washington State. The Coast Guard had to retrieve him* and deliver him safely to a hospital in Port Angeles.

Of course, I thought of my favorite nurse-aboard book, "Never While the Grass Grows" and the drama therein. It's not all handing out doses against sea-sickness and sunburn, fending off the drunken hands of boozy passengers. No. Sometimes an ectopic pregnancy is operated on whilst feelings of love are discovered.

Here's hoping that over the agonized yelps of a patient in peril, the medical crew of Royal Caribbean’s Explorer of the Seas had a little time to pitch some woo, as the kids say.

*The most interesting part of the radio broadcast (that the article doesn't even bother about) was when they talked about how the helicopter DOESN'T LAND on the cruise ship. It sends a rescue diver down with a basket and the diver (assuming he hasn't had to jump in the water for any dramatic reason) helps the person in the basket and away they go. If they asked me to do that I would just:

As I type, Bettysday commemorations are happening all over the globe with various of our Betties minding young children, curling up with a favorite book, partaking of tea or a lavish dessert tray.

My own celebrations are smaller this year. I folded a mountain of laundry and turned out several cupboards (the Mijnheer thought my backside was splendid as he saw me working, I am sure) and will take some flowers and chocolate to a friend who is celebrating her own birthday.

As I worked, I was watching the program Very British Problems and I leave it to our British Betties to tell me if it's accurate at all. A man was being interviewed and I had a full-on Dawning Realization. Well, not a full-on one. That's reserved for Mijnheer van Voorhees. But it was adjacent. It was Betty-idealization At First Sight.

Meet Nigel Havers. Well, don't really meet him. The wiki article tells me he's a fan of fidelity...now, if you take my meaning. (We can't have everything, Betties!) But he is undeniably RBD material. Graying hair, broad shoulders, perfect accent. Check. Check. Check.

It's not much but it's my only gift to you. Let's raise a glass of tea, take a bite of scone and bless the day Betty was born!

TV does not figure prominently in The Canon. It feels like the only time we see them is at Professor Baron de Werd van den Platz ter Brant's ancestral pile. It's often tucked furtively away like a girlie mag in the small sitting room Araminta is expected to make her own in the coming weeks and months of her loveless marriage of convenience.

TV is something she might watch after wrestling with difficult Dutch verb conjugation, already consulted Mrs. Jolly about dinner menus and is waiting for her husband to come home. From a surgery? From driving to Belgium? From taking her sister, Nefarious Model, out?

The programs on offer never seem interesting. And I don't see the new baroness indulging in more exciting fare like my current TV obsession Stranger Things. (That is, as they say, another book. The only gorgons in Betty Neels novels are peppery night nurses.) 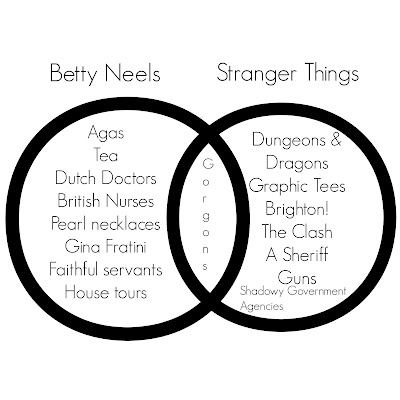 (Actually, in the interest of honesty they share a bit more: Casseroles, a loveless marriage, bicycles, romantic yearning, working in a grocery store, teenaged hooligans, resourceful heroines, missing children, a plain best friend to the pretty one who really deserves a great love story...Oh my gosh, Betties. Oh my gosh.)

I digress. I was thinking of what might be enjoyed by the Baroness when she figures out the whole thing. Here is Betty Keira's Well-Bred Baroness Programming Guide:

Netflix has Martin Clunes: Heavy Horsepower. I really enjoyed it. The baroness needs to understand the massive Friesians on her new husband's country estate.

Singin' in the Rain. Oh. A musical. How diverting. (My 13-year-old was watching it last night and said of the meet-cute when Gene Kelly jumps from a tram into the passenger seat of Debbie Reynolds elderly car "That must be the best meeting in film." And then when Lena Lamont (a Veronica. Boo. Hiss.) comes to blackmail the owner of the studio into making Kathy dub ALL her films, she said, "Some people just want to watch the world burn.")

Persuasion (1995). A tasteful remake of a well-loved classic sure to keep the baroness hopeful that her own wayward romance will find its own happy ending. In the mean time, Ciaran Hinds will not at all hurt the eyes.

Jiro Dreams of Sushi For the cooks in The Canon (Florina of The Great Lemonade Caper, Kate with her improbably small 100 pounds of seed money) they will appreciate the skill and beauty of a dish well-executed. For the nurses, they will recall that handsy houseman who tried to feed them on Asian food and then get familiar. Olivia wonders when her own husband will try to get familiar...

Antiques Roadshow UK Araminta, being tossed out of her ancestral home by an evil brother/step-mother/cousin with only her mother's old work basket and a papier mache table to show for her years of hard work tending a crotchety and ill man, will enjoy the idea that if things get really dire, maybe there's money in some of Mama's old things.

Hop to it Betties, we need a full complement of programming so that the baroness doesn't become so frustrated by her husband's continual absences that she is tempted to take off in her Loveless Mini to a hiding place so secret she already told him about it. (cough*The Blue Pool*cough)
Posted by Keira at 9:25 AM 11 comments:

Covers That are Ballooney Tunes

I got up this morning to get my kiddos off on the second day of school and turned on a video series Pledge Three likes called Good Mythical Morning. They were doing a bit called Judge a Book By It's Cover and found this stunning gem that, once seen, cannot be unseen: 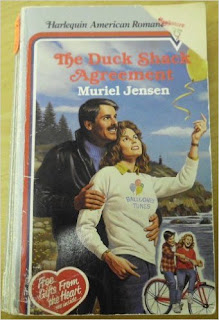 The Duck Shack Agreement by Muriel Jensen. I have notes, as they say. First among them is that the appalling cover may in no way reflect on top notch content.

The back sounds pretty standard:
One plus one equals three...
It was a match made in heaven. Rachel Bennett and Brian Tate loved each other; he adored her young daughter. The Oregon coastline was an idyllic place to live, and Rachel's balloon delivery service was booming. What more could a person want?

The Duck Shack Agreement! It wasn't ominous--just a simple arrangement between two consenting adults. It was drawn up on the shore of a peaceful lake, with not a second thought in mind. That is until life became a little more complicated than expected...and the rules suddenly became a little harder to play by.

The mystery to me is who the agreement was drawn up with. Brian Tate? But they love each other so where's the conflict? Another man? Then why does Brian get a name and the hero doesn't? Why is a grown woman wearing a sweatshirt that says Ballooney Tunes?! (Just kidding. It was the 80s. Grown women wore that stuff all the time. Dark days... Dark days...)

The Betty question is: Which book cover or title is the greatest let-down? Or which one fails to fully convey the awesomeness of the content?
Posted by Keira at 8:25 AM 10 comments:

I was cleaning with my family the other day in preparation for the first day of school and when we do that we listen to a Spanish-language ska album. (No, I don't really know why except that it makes me want to run away from home and join a band to become their dedicated sports whistle blower.)

Though I studied German in high school and college I have often wished (particularly since becoming Señora van Voorhees Dominguez) that I knew Spanish. My ability to sing along with the lyrics of this album is unparalleled however, so there's that.

I do wish I actually knew Spanish beyond the restaurant smattering one can't help but pick up and a phrase here and there. And, it got me thinking about Caroline of Caroline's Waterloo who bounces around on a horse for weeks to surprise her husband and so many of the other heroines learn Dutch verbs on the sly or even spring good dress sense on the unwitting men under the glow of a rose-shaded lamp. Even The Great Betty's husband must have been stunned when she told him that after all that time as a nurse, she was going to be a writer.

Is there something you wish you could learn that you haven't started yet? Anything your spouse or partner or friends would be particularly pleased by?
Posted by Keira at 7:56 AM 6 comments: