Betty in the Wild: Meet Me at the St. Louis Zoo

St. Louis has one of the premier zoos in the world, and it's free to all.  Amazing.

Sightseeing, as we all know, is exhausting, and requires a reservation for tea at The London Tea Room.  While not quite Fortnum's, it has a massive selection of teas, with a Betty-worthy literary quality to the menu.  As a for-instance, this is their menu listing for their grilled cheese sandwich:  "The Grilled 3-Cheese Sandwich - Sharp English cheddar, Swiss and chèvre cheeses cross international boundaries and melt unilaterally with caramelized onions on Pugliese bread. One frightening step closer to the New World Order and/or heartburn."  Ha ha!

Email ThisBlogThis!Share to TwitterShare to FacebookShare to Pinterest
Labels: betty in the wild, pets

Betty in the Wild: Not Everything is Up-to-Date in Kansas City

For instance, the steamship 'Arabia,' which sank in the mighty Missouri River in 1856.  Just three years old at the time of the wreck, the Arabia was pretty high end for her time.  However, no boat of those days was a match for the Big Muddy; the ships that survived were just luckier than the ones that went down.  The river was famously described as, "too thick to drink; too thin to plow," and less famously, its course could alter by as much as a mile in a single day.  In other words, one could cut engines, paddlewheels, oars or whatever and drop anchor in one place in the evening, and be a mile west or east of that by morning.  Since the steamships of the day were powered by burning wood, sailors cut down trees all along the shifting banks, which created erosion, which sent tremendous tree trunks and root systems into the thick and mobile riverbed.  Those downed limbs, trunks and roots became 'snags' that could stove in a wooden hull without warning.  That's what happened to the Arabia.  Everyone managed to debark in darkening evening, but most of the luggage and all the cargo, and one unfortunate mule (kind of like a donkey, Betty) were left aboard, and all had vanished into the water and mud by morning.

Over a century later, an intrepid family managed to locate the deeply-buried ship with the help of friends, and dig it up between harvest and planting seasons.  They've put most of what they found on display in a museum in Kansas City, Missouri.  Their story is quite a bit more interesting than the Arabia's.

They've recovered 200 tons of cargo from the ship, much of which is on display.  It's mostly mid-priced housewares and farming and hunting tools.

The more up-to-date parts of KC include a delightful New Orleans-style cafe called Beignet, a happy dog at a sidewalk table, and the super-wonderful chocolatier Christopher Elbow.

Email ThisBlogThis!Share to TwitterShare to FacebookShare to Pinterest
Labels: americans, betty in the wild

Courtesy of my English brother-in-law, who seems to have dug into the oeuvre.  Please, no web-searches for book quotes; just answer as best you can from your standing knowledge of the World of Betty:

#1)  In which Betty does our plucky heroine consider "Michael Caine and Kojak" (!?!?) the pinnacles of masculinity?
WINNER:  Betty AnoninTX!  Expect a prize from Fortnum and Mason to arrive soon, assuming you've ordered yourself a Christmas present therefrom.

#1a)  Whom do you consider to be the pinnacles of masculinity?

#2)  In which Betty does our plucky heroine get covered in chips (french fried potatoes)?
WINNER:  Betty AnoninTX!  Ditto on the F&M.


#2a)  What is the most distressing thing in which you, or your favorite hero or heroine, have ever been covered? 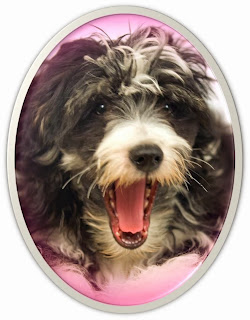 #3)  In which Betty does our plucky heroine own a dog named Rough?
HINTS:  Our plucky heroine gains Rough as part of her MOC.  There is no celebration of Christmas in the book.  The title is poetic.

#3a)  Have you ever accidentally named a dog something you couldn't shout easily when s/he escaped the lead whilst gamboling in the park?
Posted by Betty van den Betsy at 4:17 PM 12 comments:

Betty in the Wild: OOOOOOklahoma (and a bit more Texas)

After a lovely Lubbock visit, the Betties and I hit the road once more, heading east and north through Texas.  As previously noted, we saw classic ranch entrances whilst we traveled toward and through the panhandle.


Throughout the mid-section of the United States, I have been struck by the beauty of the grasslands.  The long, multi-colored grasses glimmer in the sunlight, unlike the not-quite-so-long, pretty-much-just-green grass of my front yard.


I had never been in Oklahoma before!  As per, I loved it.  Big, broad, beautiful landscapes every which where, except in Oklahoma City, which seemed to stretch about 30 miles.

Wichita Mountains Wildlife Refuge in Oklahoma is helping to preserve not only prairie dogs and bison, but also longhorn cattle.  It's gorgeous and has great hiking trails.

Email ThisBlogThis!Share to TwitterShare to FacebookShare to Pinterest
Labels: betty in the wild

It's been 2 1/2 years since Betty Keira and I finished reviewing all the books in the canon.

Nine hundred and fifty days ago.

The Founding Bettys never imagined that their secret love of all things Neels was shared by anyone else...or at least by anyone else willing to admit it. Our Uncrushable Manifesto  was simple...

"Our original goals were modest. Review all the Betty books and enjoy ourselves and try not to talk about it too much in front of our not-yet-Betty sisters. Maybe, just maybe, our signal fire on the beach would catch a stray visitor but we knew better than reach for the moon. After all, this was a blog about Betty. And nobody we knew ever read Betty. And even if they did...would they know how to use 'computer'?"

Well, our signal fire has grown to 1,494 published posts (yes, I checked) and well over half a million page views (over 579,277 according to the stats on Blogger). That's a lot more action than we ever anticipated when we began.

The Uncrushable Jersey Dress hasn't been the only thing The Founding Bettys have been involved in during this time:

Betty Keira's family has grown...in both size and number.

It's been a ride.  Now it's time to pull the great socking Betty Bentley into a lay-by and take a bit of a breather.

Betty Keira and I won't be abandoning this blog completely - feel free to make comments on old posts, take Betty in the Wild pictures (and email them to us), send recommendations for Betty-approved Life After Betty suggestions (non-Neels authors/books), Cinema Betty suggestions or whatever else floats your boat.

It's been our sincere pleasure sharing our love of The Great Betty with our fellow Bettys.  Thank you so much for participating.

p.s. I hope you enjoy The Final Touch.  It's a lovely little book to finish up with. 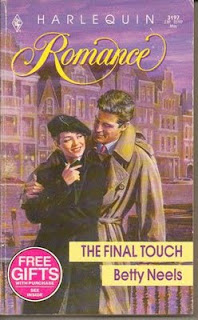 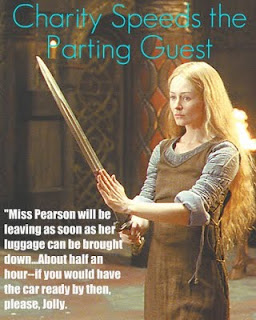 Happily, Charity doesn't have to resort to burning down the house.  Though Eunice was to leave the following afternoon, she tells her to get the $^%$  out of her #@!$#  house and not to darken her *@#;*!@ -- ;#@@#^  door ever again.  (Think of a Samuel L. "Bleep-Bleep" Jackson-Snakes-on-a-Plane freak out.)
Tyco and Charity have another spat (pretty minor stuff) where they are more than willing to meet each other half-way (but not at the same time) and it is just too bad that when Tyco leans forward to deliver an affectionate kiss Charity steps away.  Don't do that.  I can't bear it.
A mini ice age develops on their front doorstep.
Later the next day, Charity is trotting down the hospital corridor on her way from having tea with the SNO and probably feeling less the Grand Married Lady than she ever has, when Cor oozes out from under the nearest rock.  Though he attempts to break her composure, she sweeps past him in a gesture that reminds me of when the mad-cap Sister Maria returns from her honeymoon with The Captain and he has to sing Edelweiss in front of everybody and she moves to his side, picking up the threads of his lost melody and beckons with all the confidence of a happily married woman to her children to join them.
Tyco sees them, however and missed the subtleties of her confident gesture and accuses her of "meetings".  She fights back the only way she knows how; by reaching up on her tippy-toes and kissing his chin.
He chases her down, bundles her into the car, gets her nice and alone and kisses her back.
The End 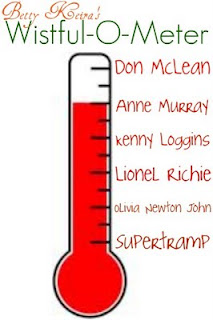 Rating:  Queen of Puddings.  I really like this book and maybe it doesn't deserve this high a rating but my Wistful-O-Meter (see right) over the end of reviews has been hovering around Anne Murray and threatening any moment to enter the hitherto uncharted Don McLean reaches so I'm giving myself some artistic license on this one.
I have a theory about books--that any one of them can find a comparable Jane Austin equivalent.  So, The Final Touch is not sparkling like Pride and Prejudice but quietly romantic like Persuasion.  Charity has such a raw deal and Tyco expects so little happiness in life that, even though they're not riding many emotional roller-coasters, you're rooting for them to make a happy family.  I'm never tempted to get irritated with Charity for that I-shall-never-love-again business because her hurt and humiliation are just so fresh.  Tyco is forgiven for it because his first at-bat was a fiasco of Homeric proportions.
Letizia and Teile are darlings.  I love the part where they make doll houses out of old boxes with Charity.
I enjoy all the hospital set-up in this one too.  You really get a sense of the enormous social chasm that ought to have separated them (underlined vividly when Charity returns after her marriage to have tea with the senior nursing officer) but doesn't because, at heart, they are cut from the same cloth.
Eunice is an interesting distraction and, happily, Tyco isn't terribly good at dangling her in Charity's face (for that matter, Charity is being rather obstinate about her motherly duties), even going so far as to compliment Charity for her ability to lie like a trooper just to toss her sister to the curb.
Food: Groentensoup, zeetong (sole), spekpannenkoeken with stroop, kerstkrans (a ring-shaped Christmas cake), poulet a l'estragon, pumpkin souffle, biscuit glace with fresh raspberries, wedding cake, little mushroom pancakes, and vichyssoise (just saying it makes my IQ jump ten points).
Fashion: Charity owns a soft, grey jersey dress which sounds suspiciously mouse-like, a burned coat gets replaced with a dark green winter coat and she buys a cranberry needlecord that carries her through upsetting social occasions like getting proposed to.  She has to talk the girls out of satin and yards of lace and a pearl-embroidered veil and satin slippers and long white gloves and into the considerably less romantic wool coat, hat and patent leather shoes (If Kate Middleton shows up in these tomorrow I lay odds that the monarchy could cock its toes up.).  She totters around on high heels for the girls and owns a gorgeous sapphire dress.  Sister Eunice swans around in fashions that probably reached their sell-by date before the book hit the publishers.
Posted by Betty Debbie at 7:00 AM 9 comments: