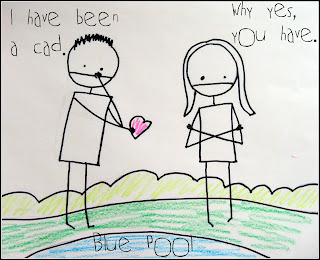 Marry in haste, repent at leisure. Reilof has a lot of repenting to do.
[Betty Debbie] I'd like to point out that we here at The Uncrushable Jersey Dress strive for only the best illustrations for our posts...and when we can't find them, we make them.
What makes Laura really work for me is the mental scorecard she keeps.
"Wretch...ill-tempered, arrogant wretch - just let him wait until we're married!" and later...
"..a resolve, a little vague as yet, took shape in the back of her head that one day he should eat his words." 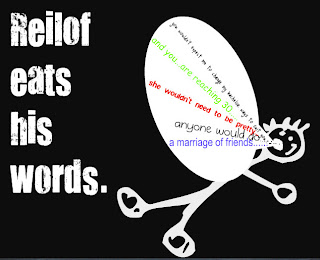 Reilof is gonna pay. And he's gonna keep on paying. Laura has marital currency to last a lifetime. He may think he's the boss, but once he falls for Laura, he has to realize what a cad he's been. One of the biggest cads in Neeldom. There are only one or two that out-cad him. I have to admit, cads are a lot of fun to write about.
What redeems him for me is that fateful week. The week he has to sweat. The week he spends looking for Laura. The week he earns some new wrinkles, and some dye-resistant grey hair. The week that zombie-bride Joyce has her last zombie-bride moment and throws yet one more zombie spanner in the works - not telling Reilof that she saw Laura in England. 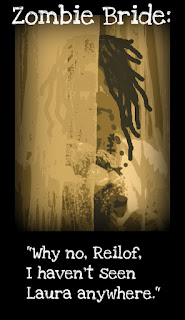 Let's talk about Joyce for a minute. Laura seems to passively give way to her, just because Joyce is so pretty. [Betty Keira] Like when I was a baby and you totally spoiled me, Betty Debbie because I was angelically beautiful...[Betty Debbie]that would make you the evil younger sister. Maybe I was/am the evil older sister. After all, I did teach you the lyrics to "Play that Funky Music, White Boy" when you were 3 years old, thus blighting your existence. I want to know why Neels heroines cut so much slack for their evil sister/cousin/widowed mother? I'd like to think it's giving them enough rope to hang themselves...but that is so seldom the case. Laura's punishment in this case is...being married to the rich tubby American with cardiac problems. I love that in all his tastelessness he even has the poor judgment of having bad veins. But, being American, he only got what he deserved. Larry the American. (I dated a Larry once...except for being skinny and a poor college student, he was just like Joyce's Larry - it's one of those names). I once had a stalker named Larry (8th grade). In case he Googles his name I'll just say his last name sounded suspiciously like Earwig. Larry Earwig. Short, chubby, near-sighted...Yes, it is one of those names. In Laura's eye's, Larry dying could be a good thing, you know she won't grieve for Larry if he just so happens to pop off, without so much as a pre-nup. She'll be right back to her Zombie Bride-ishness. She'd probably move to Holland and be invited to all the same parties as Reilof and Laura. She would also conveniently forget to drive her own car so that Reilof has to spend hours taking her back home. Dead zombies never die.
While on their "not quite a honeymoon", Laura makes a reference to the balcony scene from "Private Lives". Here's a clip. That's just the cutest thing.

Let's talk kisses. That's right, kisses. The Venerable Neels had quite a predilection for heroes swooping in and giving the girl an unexpected kiss. She had just a few types of kisses (a few more than her character types...maybe). 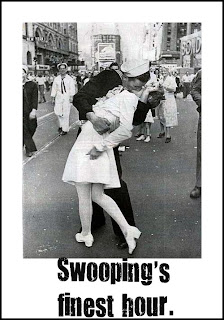