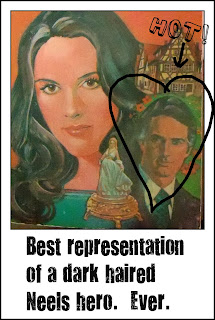 Although there is a lot of fun to be had in Sun and Candlelight (not least of which is the hero on the cover of my edition) I do have a couple of problems with it. A few leaps that I'm not willing to take. The biggie, the Evel Knievel jumping the Snake River Canyon leap has to do with "Nanny". Nanny should be sent away at the very least, possibly to a mental home. Maybe a State Run Correctional Institution. She should have a restraining order slapped on her faster than you can say "Dundee Cakes". Instead Alethea says "we trust you" !!?? Really???? [Betty Keira] Yes, I agree. The thing is that she doesn't even seem like a beloved family retainer of long-standing. She's just criminally insane and I wouldn't volunteer my children for the outreach program. 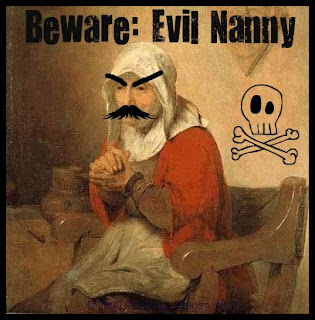 My other leap from a tall building is finding those kids lovable or charming. But you have to admit that they are rather fabulous after the alien abduction...Those little thugs can be pardoned a few hi-jinks though....considering they have been lied to their entire lives. Their dearly departed mummy is not dead (as they have been told) but is instead living it up in South America ("...[she] lives in Brazil - or is it Peru?). They will be told about this "when they're older". Not really the kind of trauma you want to spring on a teenager as it will only encourage further thuggish behaviour. I notice your British-correct spelling of the word behaviour and doff my hat to you, madam.

Neels on Mind Reading. Pretty much every Neels hero can read min 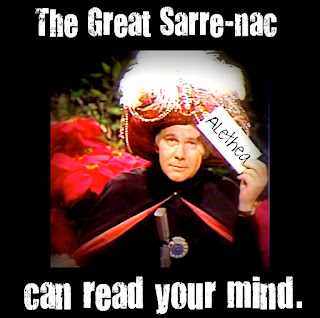 ds. One glance at a girl, and he knows what she had for breakfast, the state of her shaky finances, how often she is thinking of ex-boyfriends, and whether she knows that she is in love with him yet. This is obviously a fictional device, because in real life, men are much more often clueless. For example, Dr. van der Stevejinck would rather that I tell him what's what, than have to hazard a guess. Plus, this gives me a reason to post yet another picture of a turban. You're setting a whole new bar on awesomeness here. Also, I love that Sarre can see all that yet fail to notice that the kids are evil geniuses and that Alethea is in love with him.

And now for some fun stuff:

Sun and Candlelight starts right off, in the very first sentence with a good ol' Neels staple. The pink lampshade. This particular one is at a restaurant. Which begs the question...how many restaurants have pink lampshades on the table? I need a Food Lovers Guide to London complete with a section on pink lampshades. This may require a personal visit...

"Don't go to Brighton!" My new favorite euphemism. It reminds me of something our dad used to say when boys came to pick up my younger sisters for a date...knowing him, he hollered it as they were heading for the door. "Have a good time, don't BE a good time!" He was still hollering that when I was dating. Remind me to tell you about the talk we had about the birds and bees sometime. Hi-larious. I admit to saying these very words to my kids as they go out on dates. At first they were a little mortified, but really, it's best to be clear about things like that right from the get go. It's especially fun to say it in front of their date. Yes, I am my father.

Jaguars. What can I say? They have a super-cool hood ornament. They are also as heavy as sin. I don't mean that in a good way. I drove Betty Marcy's aging Jaguar to Jackson Hole, Wyom

ing about 10 years ago. First and last time. As I was driving down the steep, winding two lane road, I came up behind a pick-up truck that was loaded down with a vast amount of chopped firewood. The driver of the truck was, understandably, creeping down the mountain. I stepped on the brakes. Ummm....I STOOD on the brakes....the Jaguar barely slowed. We were in the outside lane, with a sheer precipice next to us and oncoming traffic on the other side. I don't remember how we survived, I've totally repressed that memory, but I did have a few choice words with Betty Marcy about vehicle maintenance. Betty Tia was in the back seat with her first (and nearly last) born son. Maybe she remembers. ANYWAY, I guess Jags would be fine in England and Holland...which are not known for their steep mountains, but I don't have a hankering for one.

Hairdryers. This might possibly be the only Betty Neels book to have an actual hairdryer. Mind you, it's not used to dry hair, it's used to dry a lavender (or is it lilac?) silk dress. The poor heroines in Neeldom are usually to be found sitting by their electric fire, filling it with 50p coins, drying their hair with a towel. Dr. van der Stevejinck and I had a circa 1979 blow dryer...and it just died last year. Thirty years of drying hair. They don't make them like that anymore.
Hamburg. I have eaten a hamburger in Hamburg. Because I could. Sarre and Alethea did not.