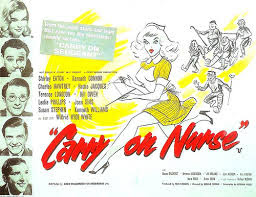 I just finished watching "Carry On, Nurse"(released 1959) on TCM. I suspect the Great Betty would NOT be amused. But I laughed like a loon. I especially enjoyed the fact that I knew why the staff nurse and the sister had different colored uniforms, and different colored belts and they actually showed a sluice room!! Of course the plot is sillier than Our Betty ever allowed. And there are no RDDs. But still, a nice bit of mad-cap British comedy. And I think that Betty fans would enjoy it.
Barb


I found a clip on YouTube from Carry On, Nurse.  You're right, La Neels would never have used such frivolity in a hospital setting...but it is rather madcap and fun. Unfortunately it's not available on Netflix, so the rest of us might be out of luck.  I did find another British rom-com there called Nurse on Wheels... I'm not sure, but it looks like most (if not all) of it is on YouTube.
-Betty Debbie
Posted by Betty Debbie at 8:56 PM