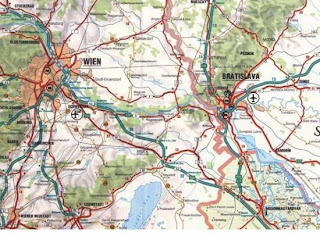 Magic in Vienna:
Lady Treascombe, Cordelia and Eileen travel to Vienna on a boat cruise down the Danube. I had thought that La Neels only crossed the Iron Curtain once (that one where they collect the doctor's old nanny from Poland) but it is clear that Bratislava in Slovakia is one of their stops. The Great Betty tells us that it is bleak (Communists did love their boxy concrete edifices) and that there are guns in evidence but I was surprised to know that any Western river boat would be allowed to stop in any event. I wonder if this mimics any trip Betty took--I'll bet it did. I wonder if she tried to smuggle anyone out. 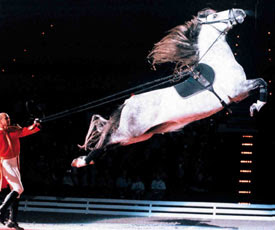 Charles takes Cordelia and his niece to the Spanish Riding School for an outing. (Naturally he is surprised to notice Cordelia's delighted absorption.) Another of the writers that we'll get around to including in our 'Life After Betty' series will be Mary Stewart. Her 'Airs Above the Ground' is a mystery that revolves around these awesome horses. Here's a little wiki mess:
Traditionally, Lipizzaners at the school have been trained and ridden wholly by men, although the Spanish Riding School states that there has never been an official ban on women. In October 2008, two women, an 18-year-old Briton and a 21-year-old Austrian, passed the entrance exam and were accepted to train as riders at the school - the first women to do so in 436 years.

I believe it would be appropriate to join hands as I lead us all in the opening verses of The Anthem: 'I am woman, hear me roar, in numbers too big to ignore...'

On another outing, they go to a concert and listen to Strauss' Tales from the Vienna Woods: The waltz's premiere that year reiterated the ascendancy that the dance had made from its humble village origins to become one of the pleasures of fashionable Viennese society, largely thanks to the performing and composing talents of the Strauss dynasty. 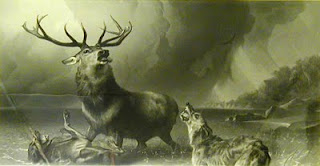 Landseer's Stag at Bay Dogs with bared teeth give such a nice, cozy feel in a home.

The local nurse, Gloria, has a picture of The Stag at Bay hanging on the wall in her cottage, as part of the eclectic collection of art that has been given by locals. Landseer is the same artist who did that one of Queen Victoria, Prince Albert, Princess Royal (holding a dead fowl) and more dogs than sense littering Windsor Castle (which would totally get pride of place in my home over the toilet--as dead birds = kitsch). I like his style but would have to re-gift this little number. I couldn't even put it in a closet without getting the heebie-geebies. 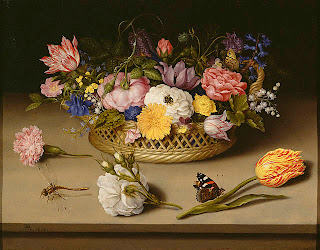 During the obligatory house tour, Sappha sees several flower studies by Bosschaert. (To the Google, Batman!) They're nice if a little precise for my taste. His wiki article was brief but contains this nugget: In 1587, Ambrosius Bosschaert moved from Antwerp to Middelburg with his family because of the threat of religious persecution.
Would that make him Catholic? Why won't you tell me Wiki? Why?!
Posted by Keira at 5:00 AM