Three For a Wedding has a shadowy love-interest named Jack who is a good man (pretty much) but he's not ringing Phoebe's bell. This reminded me of:
A Holiday Affair (1949) 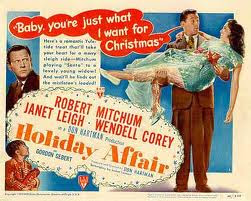 Janet Leigh is a single mom with a really, really nice guy named Carl (the poor Carls of this world are doomed to be upstaged) who wants to marry her and be the father of her son. That she doesn't return his feelings are a bit of a bonus--after all, she is a widow and doesn't want to fall in love again. Robert Mitchum--a very unsafe choice with sleepy RDD eyes--stirs the pot and young Timmy--trying to be the man of the house--has more than a little bit of Three for a Wedding's Paul in him.

This is one that you can get from Netflix but the wait gets longish around Christmastime.

When Two Paths Meet has an abandoned baby. Think we can't turn that into classic comedy gold? Watch me:
Bachelor Mother (1939)

Polly Parrish (Ginger Rogers) is a salesgirl at the department store John B. Merlin and Son in New York City who has just been told that since the Christmas season is ending she is going to be dismissed. During her lunch break, she sees a stranger leaving a baby on the steps of an orphanage. Fearing the baby is going to roll down the steps, Polly picks it up as the door is opened, and is mistakenly thought to be the mother.)

Love (with an adorable David Niven) ensues.
Posted by Keira at 5:00 AM