Strange, enigmatic and mysteriously random. That's what comes to mind when I look at the cover art for Tangled Autumn. Usually 'The Best of Betty Neels' cover art is blandly unoffensive. Emphasis on bland. This one is odd. Why is there an oddly shaped loaf of raisin bread on an oddly tilted table? What does the oddly broken post represent? I'm not sure what is supposed to be tangled around it, but I do get that it is tangled. And then there is the odd island with half a rainbow (or, as Betty Keira suggested, a meteor) and some odd grooves on the beach - like someone has been trying to spell out HELP and ran out of driftwood. Enough about the cover. This is absolutely the ideal time to read Tangled Autumn. It will help you solve ALL your Halloween costume needs. I will make it even easier by putting asterisks around all the descriptive terms - and believe you me, there are a lot of them. Thank you Betty.

Nurse Sappha (ugh) Devenish is a gorgeous girl who has been disappointed in love. Disappointed since the day she caught her cheatin' fiancée necking in the hospital corridors with a hoochy blonde nurse. She's sadder but wiser now...it will be a cold day in December before she trusts a man again. Lucky for her it's already autumn. 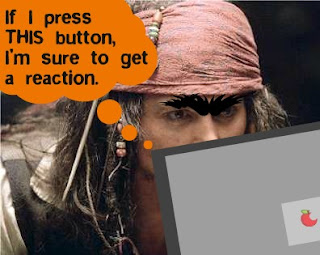 Sappha is that rarish Neels heroine who not only drives, but she drives her own car. We're supposed to be impressed that she drove 600 miles to Scotland...and then ran out of gas just miles from her destination. Are you impressed? Neither is the scruffy looking man in the Land Rover who gets out to help. Did I say scruffy? Sorry, that's not how Sappha sees him. At first she thinks he's a *farmer* - due to his shabby duffel coat and his corduroy trousers tucked into wellies. A second glance makes her less sure...he's got a haughty face with a hawk-nose, a wide forehead and a pair of winged eyebrows, so arched and thick that they gave him the look of a *satyr*. And so it begins. He's a bit abrupt with her (and, to be fair, chauvinistic) and so she smolders. This will be the template for their relationship. Sappha is a keyboard and Rolf (yes, Rolf) is a talented hacker. He knows instinctively what buttons to push. At least, he knows which buttons to push to make her mad, frustrated, smoldering, quarrelsome, peeved, etc...after a few pithy and pointed remarks on the folly of running out of petrol, farmer/satyr guy puts some gas in her tank and they go their separate ways. But not for long. Just after telling her new patient, Baroness van Duyren, about the stranger who put petrol in her tank, in walks the Baroness's son. "Enter the *Demon King* - how very interesting life has suddenly become!" Yes, mum has a new lease on life. She'd all but despaired of getting her eldest child married - and along comes Sappha who seems to be just the right girl.

Buttons are pushed, seething ensues...and now it's time for:

Zombie Andrew, the ex-fiancée, rises from the dead to haunt Sappha. Without even a by-your-leave he shows up in Scotland as if nothing had happened. He just doesn't compare well with the *bad, bold baron*. His driving is not as good, his choice of dating venue - ditto, his manners - ditto, ditto just 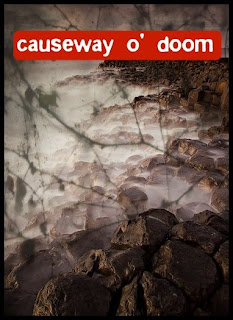 about everything else (I'll bet he has better eyebrows...but that's about it). After a disastrous date - a date that Sappha didn't even want to go on - the evening ends disastrously - at least it does for Sappha's outfit. She is called upon to help Rolf out with a Caesar on a windswept island accessible only by boat or a treacherous causeway. Zombie Andrew is also invited to help - but he refuses. It's not his job. Girlfriend manages to haul the midwifery bag and a vacoliter of type O across the slimey, slippery causeway (wearing the pretty dress and expensive shoes she'd worn on the date). She could have saved herself a little effort since she manages to drop the vacoliter before getting a chance to use it. Rolf is not too fussed - it turns out that Sappha is a universal donor, so he just pops in a needle and takes what he needs. Whether the blood loss had anything to do with it or not, Sappha has her Dawning Realization while being drained. It's all 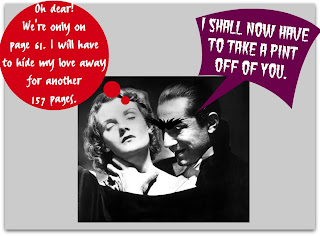 Performing a Caesar in a dusty cottage with no mod cons is draining in more ways than one. Sappha and Rolf take turns sleeping. Rolf comes off best in this. Asleep his face 'looked remote and austere and very handsome, rather like a *crusader knight* reclining in perpetuity on some ancient tomb'. By morning he's back to looking like an unshaven *ruffian*.
I sympathize a little with Sappha. Even though she's in love, she can't seem to make out Rolf. He's hieroglyphics and she doesn't have a Rosetta Stone at her disposal. Every time he shows that he's not really a *'bad, bold baron'* she's surprised.
Sappha gets to see Rolf well-groomed and dressed - but she still perceives the 'air of a *brigand*' about him. If only he wouldn't go around 'looking like a *fisherman* or a *pirate*!'
It's time for Rolf 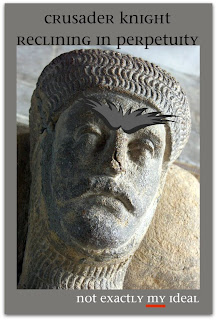 to take a trip to Holland...and never have two weeks dragged more. No pirates, fishermen, barons, brigands or ruffians around to liven up the place. The first thing he does upon returning, is to grab Sappha and kiss her. And then smile in a way that makes him look 'positively *satanic*.' Editor's Note: Only half way through the book and we've got ten different ideas for Halloween. Just don't forget the eyebrows.
The Baroness is finally cleared to go home to Holland! Sappha is to be kept on as her nurse for a few more weeks - until she can get around on her own. For some reason, they travel from Scotland to London before heading to Holland, which seems like the long way to me... This gives Sappha's mum a chance to get acquainted with Rolf and the baroness. Sappha's mum tells Rolf all about Sappha's childhood: school hockey team, braces on her teeth and Gold Medalist (sounds like a well rounded childhood).
The exterior of the baronial home is not quite as attractive as most to be found in Neeldom, but the interior House O' Love tour - top to bottom this time - proves that it's got what it takes...even down to the Scottish cook, Mrs. 'Dinna Fash Yesel' Burns. Rolf has a conference or something...he'll be gone for days, but he leaves Sappha with a kiss on the palm. Which is pretty sweet for a bold, bad baron.
Sappha takes it upon herself to become the dog walker in his absence - which is just the thing for taking her mind off Rolf when she falls in a muddy canal in a failed attempt at puppy rescuing. Fortunately for her (and the puppy) Rolf happens along just in time. And now it's time for....

Like a zombie who hasn't had his quota of brains for the day, Zombie Andrew shows up in Holland. He's not after Sappha this time. No, he's going for some younger, wealthier brains. Whose? Sixteen year-old Antonia. Eww. Double Eww. Despite the fact that Sappha doesn't exchange a word with the rotten blighter, Rolf is seeing red...or possibly putrid green. He's sure that Sappha is sneaking around with Zombie Andrew - but she's just protecting his little sister (argh! she should be ratting out the girl, not aiding and abetting). Rolf fires her without so much as a two-week notice - she's to take the next train outta town. Boy oh boy is she mad. She's not about to tell him the trut 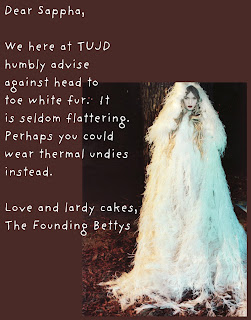 h about zombies. Luckily for her, although Antonia might be a flighty nymphomaniac, she does have a conscious (having barely escaped having her brains eaten the night before) and spills the beans to big bro. A row ensues - witnessed by the most delightful American couple ever to grace the pages of a Betty Neels. Sappha runs off, shortly followed by Rolf - who proposes pretty darn quickly this time. Kissing, let's get married in Scotland ASAP, 'I shall have to be wrapped head to toe in white fur.' The End

Rating: I left out great swathes of the book...While this story had some really, really good ingredients, they didn't all mesh together for me. This was a fairly early effort by The Great Betty - I think she was still finding her literary feet. Sappha, besides having a weird name, is one of those prickly heroines. She's prone to judging a book by it's cover - but in this case the book is a baron and she doesn't read his language. He never gets the benefit of the doubt with her...which makes me think their married life is going to be full of snits, fusses, quarrels and a fair amount of crockery throwing. In fact, Rolf sort of implies that on the last page. I don't mind a little quarreling and crockery throwing - that can be a nice way to clear the air and make way for some implied...ahem...it's the constant misunderstandings due to a lack of communication - on both parts that gets to me. Plus there's a huge ick factor with a sixteen year-old girl sneaking out with Dr. Andrew. I think the best I can give it is an overall Treacle Tart (though there are individual scenes which deserve much, much more).
Food: Smoked salmon flan, steak and kidney pie, pears stuffed with marrons glacés, mousse de Sole au Champagne, Fraises Romanoff (which is a fancy dish of marinated strawberries and whipped cream), spek pannekoek. Surprisingly, even though most of the action takes place in Scotland AND Rolf has a Scottish cook back in Holland, there is no mention of bannocks.
Fashion: Sappha wears unsuitably fancy tweeds with expensive shoes. oatmeal tweed suit with a nut brown angora sweater and round fur hat that had been made from an elderly stone-marten cape of her mother's, shoes bought in an atmosphere of complete amiability, pink angora dress, coat that is a mix of orange, brown and cream - worn with an orange velvet hat! Rolf generally wears a shabby old duffel coat and corduroy pants while he's out and about in Scotland...but he does own a dressing gown of 'startling splendour'.
Posted by Betty Debbie at 5:00 AM