Three for a Wedding: 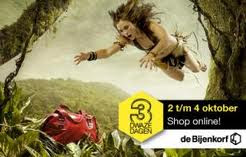 'The Bargain Hunt'--De Bijenkorf
The finale of Three for a Wedding happens in De Bijenkorf in front of a display of kitchenware. De Bijenkorf means 'The Beehive' and they are a chain of upscale department stores founded in 1870. Interestingly, the same company that owns them also owns another more downscale chain that is a staple of Betty Neels books; Vroom and Dreesmann. The title of this one takes its name from that child's rhyme about magpies that The Venerable Betty liked so well. One for sorrow: two for mirth: three for a wedding: four for a birth: five for silver: six for gold: seven for a secret, not to be told: eight for heaven: nine for hell: and ten for the devil's own [self]. It's used in at least one other book--the end has an old Nanny noticing four magpies which mean that the principles can finally have some implied conjugal relations. I'm not in love with the fact that the title is anchored around such a flimsy thread. The sisters see some magpies and the rhyme is said but then there's no other tie-in. Anyway, this is a book I wouldn't mind re-naming. 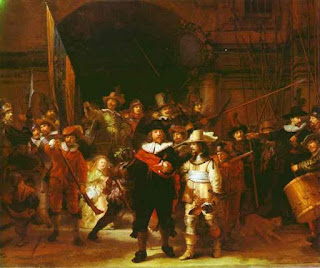 Phoebe gets to visit the Night Watch. As this happens fairly often throughout the Neels canon I'll just mention the two recent(ish) episodes of vandalism related to this work:
[It] was attacked with a bread knife by an unemployed school teacher, Wilhelmus de Rijk, in 1975, resulting in a large zig-zag of slashes. It was successfully restored but some evidence of the damage is still observable close-up. De Rijk committed suicide in April 1976.In 1990, a man sprayed acid onto the painting with a concealed pump bottle. Security guards intervened and water was quickly sprayed onto the canvas. Luckily, the acid had only penetrated the varnish layer of the painting and it was fully restored.

They go for a 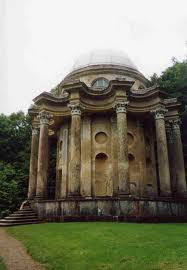 walk around Stourhead in the middle of winter...in the snow. You Bettys might recognize Stourhead from that scene in the Keira Knightly version of Pride and Prejudice where we're supposed to believe that there's an atom of sexual energy between the principle actors. How I hoped I would like that version (and I don't hate it but...)!

Most of the action takes place around Salisbury Cathedral. The Graingers live right next to the 'close' - and Jason is pretty near to it also: A Cathedral Close is an architectural term referring to the series of buildings that serve as appendages to a cathedral. These may include buildings housing diocesan offices, schools, free-standing chapels associated with the Cathedral, and the houses of the bishop and other clergy associated with the cathedral. They sometimes, although not necessarily, are arranged in a sort of square around a courtyard forming a close. This map of the close at Salisbury Cathedral shows a typical arrangement.