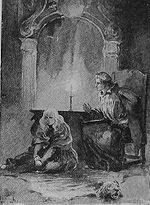 The Edge of Winter:

It comes from a poem call The Princess with such a great plot!:
The poem tells the story of a heroic princess who forswears the world of men and founds a women's university where men are forbidden to enter. The prince to whom she was betrothed in infancy enters the university with two friends, disguised as women students. They are discovered and flee, but eventually they fight a battle for the princess's hand. They lose and are wounded, but the women nurse the men back to health. Eventually the princess returns the prince's love.

'Let's dance the old-fashioned way...' Crispin tells her right before he whisks her away for a quick proposal: 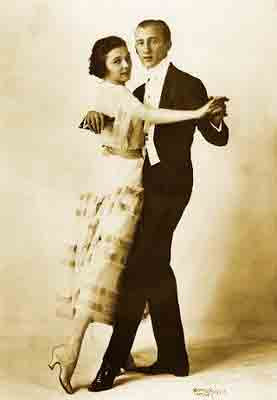 Whew. Can I get some ice water here?

The Fifth Day of Christmas:

'The Chevoits, she knew, were close but shrouded in the still lingering mist into which the trees ahead of them marched'. The Chevoits are rolling hills straddling the England-Scotland border but to me the name sounds like a domestic car of, say, a mid-seventies vintage...(Shrug.)

Marcia prides herself on being an intellectual... she reads Goethe, Vondel, Homer and Virgil and pooh-poohs frivolous entertainment such as The Sound of Music. For Christmas Ivo gives her a beautifully bound volume of Mantaigne's Essays. And of all those choices, naturally I'm going to give you Sound of Music info...Marcia would hate me: 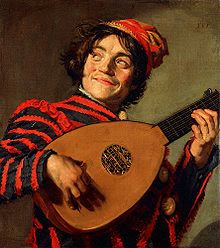 ...noted film critic Pauline Kael blasted the film by calling it "the sugar-coated lie people seem to want to eat," and "we have been turned into emotional and aesthetic imbeciles when we hear ourselves humming the sickly, goody-goody songs."
In other news, I don't think I like Pauline Kael very much.


At the museum, they dawdled among the Rembrandts, Vermeers and Franz Hals...Julia was pretty knowledgeable.

Centuries later Vincent van Gogh wrote to his brother Theo: 'What a joy it is to see a Frans Hals, how different it is from the paintings – so many of them – where everything is carefully smoothed out in the same manner.' Hals chose not to give a smooth finish to his painting, as most of his contemporaries did, but mimicked the vitality of his subject by using smears, lines, spots, large patches of color and hardly any details.
Can you get a better recommendation than that?