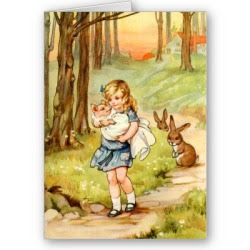 Although a God fearing man, 'he could lie like a trooper when it was necessary.' (Cough) My tombstone will very likely read: Although a God-fearing woman, if shown an ugly baby, out of guilt and a mis-placed sense of compensation, she could lie like a trooper when it was necessary. I have a thing about ugly babies. I feel just terrible that a common and unkind thought has whispered past my cerebellum when faced with what ought to be one of the sweetest things in the universe. It prompts me to go way overboard on the compliments. So if I tell you your baby is gorgeous, more often then not, I am lying.

There is a field trip to the Roman Baths (in Bath). You can't swim in them anymore (such a bummer) due to the original lead pipes that the water passes through. Also, the more significant danger is now considered to be infectious diseases. In 1979 a girl swimming in the restored bath swallowed some of the source water, and died five days later from amoebic meningitis. Tests showed that a species of amoeba was in the water and the pool was closed, and remains closed today. 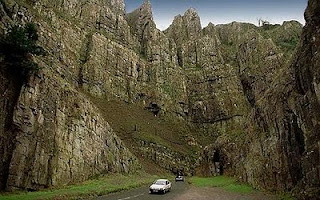 Also, there is a field trip to Cheddar Gorge. I found the most marvelous blurb about it on Wikipedia: The gorge is the site of the Cheddar show caves, where Britain's oldest complete human skeleton, Cheddar Man, estimated to be 9,000 years old, was found in 1903. I think that's the first time I've ever heard the words 'Cheddar Man' outside a sentence about the Wisconsin State Fair...

At the end of term program (just before summer break), the senior girls put on a play they wrote themselves, and the choir sings a song about speeding the boat over to Skye (?), something by Gilbert and Sullivan and a sad song about snow. It makes me wonder if they learned the snow song for their Christmas show and had to bump it for lack of time. With many years of pageant watching under my belt (and many, many yet to come) I'll vouch for this common practice. If they went to the trouble of learning it then, by gum, you're going to hear it. 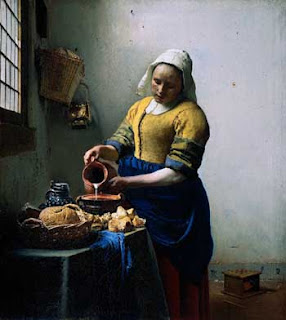 Gretel was going to unionize the other milkmaids,
but first she had to separate the cream...

Olivia and Nel go to see the big picture at the Rijksmuseum (the Nightwatch). Olivia makes up stories to tell Nel about all the characters. I always do this when I go to museums even though my degree was in Hey-look-at-the-pretty-art-and-wax-profound-for-the-space-of-a-10-page-paper. It's a much better game. Cheaper too.