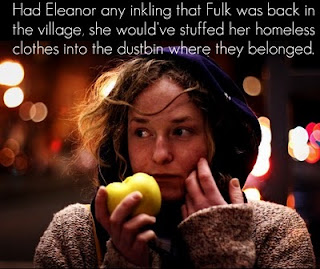 But Eleanor didn't bank on Fulk van Hensum, 36, showing up in her life again.
Yes. Again.
There was a torrid affair lasting some years that broke off due to his insistence on her abandoning her career ambitions. She's been hiding out in the tippy-top of Scotland (building up a world-class 'consultation' empire) ever since--working to ruin him and dreading the day he would walk back into her life.
(But can't you totally see another Harlequin of similar vintage with just that plot?)
No, Fulk is a friend of the family and he knew Eleanor when she was a five-year-old terror. That he catches her at her most unglamorous (sitting in the barn, eating an apple and playing with kittens) is an annoyance.
Editorial Note: I must have read this as one of my first Neels because the 11 year age gap felt really big. Silly me.
Their re-acquaintance is swift enough to cover all the pertinent details.
Him: Married? No. Engaged? Yes...Do you always dress like this?
Her: You're just as hateful as you were when you were a boy.
Her antipathy toward him is as irrational as his love for her is sudden. And pity the poor man. One minute he's engaged to Imogen (a name whose Latin meaning is 'image of her mother'--which is both hilarious and illuminating) and the next moment he has chucked his bonnet over the windmill for the gorgeous former-ankle-biter. All this is reason enough to excuse his wicked twitting of Eleanor, if you need one. 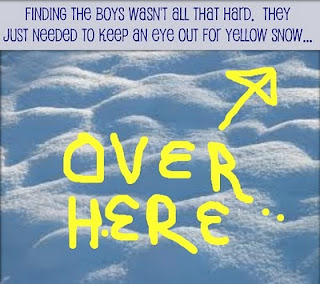 He takes a shine to her eight-year-old little brother, Henry, whose medical frailty is like a looming billboard over the proceedings. (Buy rheumatic fever! Satisfaction guaranteed! New, brighter formula!)
Fast forward a month. Eleanor is visiting home when a sudden blizzard traps Henry, his teacher and several other boys on a mountain-like pass.
Editorial Note: I love this episode. Fulk calls Eleanor his 'pocket compass' (which passes for a compliment in the tippy-top of Scotland) and they both have to pilot an aged school bus up some treacherous roads--showing up as brave, hearty, and full of good spirits.
Even though Henry escapes the event in relatively good health, Eleanor and Fulk's medical spidey-senses detect signs of an approaching illness. To head off any downturns, Fulk invites little Henry to Holland. Eleanor accompanies them to the passport offices and spends her time making a list (Doubly underlined) titled Things I Would Like to Have:
(It is an exhaustive list with catholic tastes. Pause here to wonder if Fulk sees the list.)
Interlarded in all this to-ing and fro-ing Eleanor finds out that Imogen (Oh that's right. Imogen.) is in Cannes. We don't know exactly how Fulk feels about her absence and he manages to answer any questions Eleanor puts to him with all the piercing specificity of a Chinese fortune cookie. (Confucius say Guinea-blond 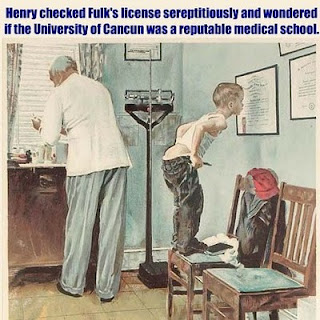 e in Cannes, an American millionaire will find.)
And then Henry's illness goes from hypothetical to nearly lethal. The rheumatic fever has arrived. Fulk fetches Eleanor, makes time to ogle her legs in the airport lounge and then whisks her off to her brother's side.
This part of the book is where our hero is thoughtful and distant--managing to convey the kind of interest and concern one might expect of one's insurance salesman. He avoids her as often as possible as they get Henry slowly back on his feet.
Baroness Oss van Oss (Imogen-image-of-her-mother's mother) is pretty much the supercilious harpy you would expect, swooping in to make sure her daughter's fiance isn't playing patty-fingers with the nurse. That Eleanor by this time knows she loves Fulk (and that Imogen's mother might have a point) makes no dent on her moral outrage.
Fulk rushes off to Cannes for a weekend and Eleanor stews like a girl who minds. (Naturally she minds.)
Things float along for a while in a trench warfare kind of way--either side is going nowhere and poison gas attacks are kept to a minimum--until one day Imogen (the much anticipated Imogen) shows up in Fulk's house. 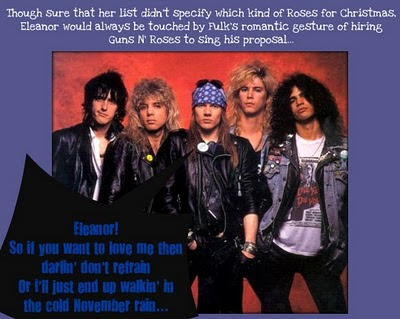 Imogen isn't exactly raining hellfire and brimstone on the poor nurse's head--she's catty, to be sure (Mama said you were pretty, and I suppose you are in a large way, but not in the least chic--I wonder what Fulk sees in you?), but marvelously direct when Eleanor tells her to wait for Fulk.
'But you're going to marry him--you love him,' declared Eleanor persevering.
'No I'm not, and I don't.'
'Well, now what?'
Fulk will take care of 'now what'. He's got dozens and dozens of roses for Christmas if she'd care to step into the next room. He's going to do his proposing in style.
The End

Rating: I didn't dislike it but I wasn't in love with this one either. Maybe I've been suffering an embarrassment of riches (The Mistletoe Kiss last week and A Christmas Romance coming up) so that this selection is being judged against those really great offerings.
The characters are interesting, they have a compelling back story (a hero who remembers her when she was a snotty ankle-biter! Yes!) and they have a menacing (if traditional) threat of Imogen the Affianced.
But, like making jello in a heatwave, this story never quite gels for me. The Great Betty tells us that they're getting along but more often she shows us that they're ready to fly off the handle with one another--not that that is unexpected in the circumstances. If I had a mad passion for a man and he was engaged to a guinea-gold paragon I might find myself easily nettled as well.
Henry is that rare literary child who is a genuine delight and Ma and Pa MacFarlane add a homey and tolerant touch to the mix.
The beginning and the end are really the best parts for me and the culmination is charming.
Tasty Mince pie for me.

Food: Ice cream with nuts, boiled fish, nourishing stew, braised heart, spaghetti on toast (I need to be assured that this would be garlic toast.), hake and chips, poffertjes, Crowdie (a parcel of which Fulk is taking back to Holland for Henry who is sick), ham souffle, baked apples and cream, caramel custard and ragout of game.

Fashion: She meets him again wearing old slacks and a thick shabby sweater. She dons a russet tweed suit to impress him and has a tweed coat and fur hat. His servants give him a dreadful tie for Saint Nicolaas which she doesn't doubt he will wear.
Posted by Keira at 5:00 AM