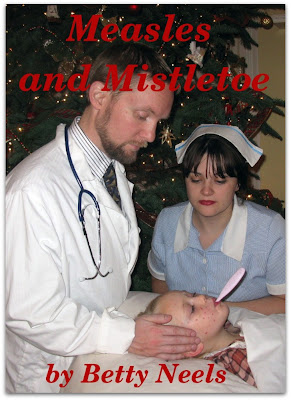 For your consideration I give you a new book by Betty Neels, Measles and Mistletoe.

He had cured little Margot of the measles but could mend her broken heart?

When Dr. Moose Steuve van der Haar asked Georgianna Candleton to nurse his young ward as she recovered from first the mumps then the measles, she leaped at the chance to
put some distance between herself and the man who had broken her heart. Jilted by a man who called her boring and predictable, 27 year old Georgiana has decided to devote herself to a career in nursing, as a private nurse in Holland she was sure she could forget about men entirely.
The vast and lint haired pediatric specialist was distant and professional and his demeanor was as cold as his ice blue eyes. Certain that she was safe she agreed to work in his home. Their relationship was that of doctor and nurse until he kissed her beneath the mistletoe...


Please note that my husband posed for the photo, he is also vast-ish and lint haired. It was even his idea to wear the stethoscope and the back blurb was approved by him. Nutmeg patiently posed as the sick little "Margot" my eldest son took the photo while the younger son supervised. It was a family affair!
Posted by Betty Debbie at 9:22 PM