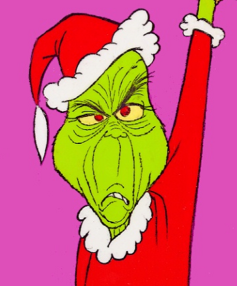 Annaliese, still clinging to Hubold,
her hair in disarray, knew the jig was up...

Annaliese is the Grinch and she's going to attempt to steal Christmas (Ruerd) away from little Cindy-Lou Who (Emmy). Happily, after a spot of snogging with a fink (the dog?) she paves the way for all the Who's to have Christmas.

I'm going to have to stretch a bit after those unlikely gymnastics...

A Christmas Wish lasted practically the whole year long and I think that Betty Debbie wished it were shorter. But maybe The Great Betty was going for a feel reminiscent of:
Holiday Inn (1942) Here, Betty Keira blights any chance of being nominated to the Supreme Court...
Bing Crosby sings and Fred Astaire dances and they both try to stab the other in the back. But never fear, the guys get their girls (whew.). Bing is supposed to compose songs for each national holiday (beware Lincoln's Birthday!) and if there had been a holiday called 'sport day' then he would have sung about that too.
Posted by Keira at 5:00 AM