In A Christmas Proposal Bertha has one of those dire families that argue forcibly for being raised by wolves. So too does the main character in:
About a Boy (2002) 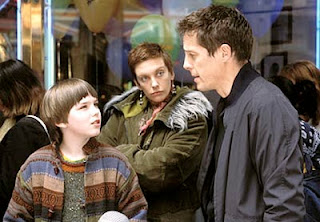 I have nothing but affection for you Bertha, I'm just trying not to look at your sweater...

I love, love this movie even though, along with Betty Debbie, it occupies a spot high up on my shelf where the children can't reach (language mostly). It has a bleak little Christmas and a posh, upscale New Year's party--the kind where the Rachel Weisz doesn't look a bit out of place--a young boy (Bertha?) who is forced to wear awful vegan clothes (nearly!) and Hugh Grant playing the creepy man/boy so well that it's hard to unknot fact from fantasy.

I think we need another New Year's movie for A Happy Meeting. How about:
The Apartment (1960) 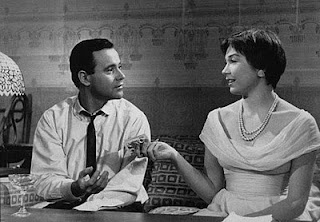 The premise is quite racy (corporate types co-opt an office drone's apartment so that they may conduct their illicit liaisons) and the bit where Shirley MacLaine has passed-out on sleeping pills is shadowed slightly (so slightly) in A Happy Meeting when our heroine falls asleep in the snow. The abrupt and lusty ending of A Happy Meeting is also mirrored in the film when, upon hearing Jack Lemmon's character declare his love for her, Shirley responds, 'Shut up and deal.'
Posted by Keira at 5:00 AM