Roses For Christmas revolves around a very sick little boy. Boy, that was easier than falling off a log:
A Christmas Carol (1984) 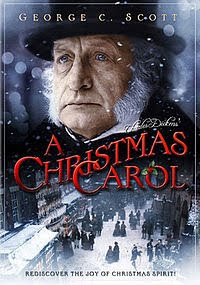 Henry is a very Tiny Tim sort of character and Baroness Oss van Oss could easily pass for Scrooge's (Fulk's) wretched vision of Christmas future...
I really don't mind Scrooged one little bit either and The Princess Bride also almost made the cut when I found a picture of supposedly-ill Fred Savage being read to by Peter Falk with a Santa Claus craft hanging on the wall behind him. (But even I couldn't torture logic that much...)

I'm not going even try to tie in A Christmas Romance in with my next pick. It's simply my favorite Christmas movie ever:
We're No Angels (1955) We always watch it after Thanksgiving and shush (and hang by their toes in the dungeons) anyone who tries to talk over the Peter Ustinov bits. I suppose, as an anemic tie-in, it does have a Christmas romance (or two).
Posted by Keira at 5:00 AM