It's been an interesting couple of weeks since the End Of Days.  For one thing, both Betty Debbie and I have stopped neglecting our little mommy blogs (much to the relief of friends and family...well, maybe) and been wrestling our homes back into some sort of shape.  You'd be surprised  how the dust bunnies breed when the TBR and TBB (to-be-blogged) piles loom not unlike a small Himalayan foothill.
I organized my junk drawer yesterday.  My. junk. drawer.  Which, needless to say, wouldn't have been tackled if Sister Harriet Goes to Holland and Two Weeks to Remember were calling me.

But what am I reading?  A little political philosophy.  Thomas Sowell's A Conflict of Visions and I ordered De Tocqueville's Democracy in America (which I didn't have a copy of (I probably sold back my copy to the bookstore in college for three dollars and a Snickers bar.) and which my husband immediately snatched)--which is a heavy read but after a year and a half of a steady diet of gumdrops and lollipops...

I'm also leafing through some of my old favorites that I've neglected all this while--Summers, Hill, Cartland....Whaaaa???  Yes.  There.  I said it.  Cartland, Barbara.  Or as I like to call her Madame Ellipsis.  ("But...Roderick...I...am...unable...to...go...to...the...ball!" said Lady Fionella as she swooned.)  She's an author that drives me crazy because 80% of her stuff is just that sort of dreck.  And being consistently campy has its own charms but then she'll go out and write a novel like Love Under Fire: 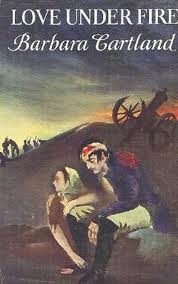 It's one of my favorite books of all time.  Granted, (gulp) you have to close your eyes to reason and accept that at some point the hero is horrified to think he's fallen in love with someone who says she's a 13-year-old. (Yes.  Really.)  But it's a thumping great adventure story--the best part is when the ship is in a squall and the heroine sensibly decides that staying in the cabin clutching a table leg all night would be a better idea than braving the decks, making a nuisance of herself and being swept out to sea in some sort of proto-feminist gesture--the likes of which all to often pass themselves off as rational plot contrivances.  (And there's nothing I hate more than a heroine who is supposed to be intelligent and wise doing something so TSTL.  Can we all shout with a megaphone to the romance authors of the world: Being a smart heroine does not mean putting the lives of others in danger just to show us you're a girl with pluck.)

I've also been reading a bunch of young adult fantasy--short stories, Robin McKinley, Mary Stewart, that sort of thing.  Betty Debbie is a font of recommendations on that end.  I love YA fantasy in the same way that people feel passionate attachment to film Westerns.  On one hand, they can just be about the spurs and the boots and the guns or the fairies and dragons and the magical enchantments.  On the other hand, they can be the scaffolding to discuss weightier issues.  (Come to think about it...most genres are like that--very easily dismissed as formulaic (and a lot is) but it can also be just the skeleton that holds up THEMES (In my head I have triple underlined 'Themes' and drawn little hearts around it.))