Life After Betty:  The Uncommon Reader by Alan Bennett

Alan Bennett always makes me think of A Girl to Love, one of Betty Neels’s six stories to feature a non-doctor in the role of hero/future husband.  In that one, Oliver Trentham is a wealthy, well-known writer for television.  That’s what Alan Bennett is!  And he’s about the only writer for TV I could name, and he was rather handsome as a youngster. 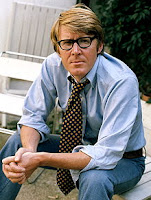 Bennett in 1973 – not bad for a bisexual intellectual comedian who writes TV plays with Wittgenstein references, right?

In addition to TV scripts, Bennett has also written a host of plays, movie screenplays, essays, short stories and novellas.  Apparently he acts, too, with a thick Northern (Leeds) accent.  The Uncommon Reader is one of the more recent of the novellas, published in 2007.  At about 25,000 words, it’s a quick read, and with Bennett holding the pen it’s a delightful and inspiring one that repays re-reading.

The central conceit of the story is that Queen Elizabeth II, stumbling upon a mobile public library, picks up a novel to be polite and gets captivated by the world of literature.  Bennett conjectures that the queen had previously not been a reader in part because of the requirement attaching to her role that she avoid obvious preferences.  “And besides, reading wasn’t doing.  She was a doer.”  On her first attempt, she inadvertently chooses a “duff read,” but perseveres:  “That was the way one was brought up.  Books, bread and butter, mashed potato – one finishes what’s on one’s plate.”  To escape a dull meeting, she takes out a second novel, and Nancy Mitchell’s The Pursuit of Love captures the queen.

She becomes a voracious reader with a catholic taste that encompasses Jean Genet, Lauren Bacall and Alice Munro.  Staff and family are forced to make adjustments in schedules and standard procedures to accommodate her majesty’s reading.  Various functionaries try to curtail it, but their efforts are powerless in the face of literature’s pull.

This imaginary queen makes important discoveries in her reading, both as she thinks over what she’s read and as she moves on to writing down her thoughts.  “Briefing is terse, factual and to the point.  Reading is untidy, discursive and perpetually inviting.  Briefing closes down a subject, reading opens it up.”  “A book is a device to ignite the imagination.”  “You don’t put your life into your books.  You find it there.”  As she writes, she is liberated to discover, for the first time, her own voice.

This is a wonderful, chatty little story with some great suggestions for future reading, and some thought-provoking reflections on the causes and effects of literature.  The queen, as Bennett imagines her, is a delight – smart, thoughtful, forthright.  His suppositions seem so reasonable that I have a hard time remembering this is a novel, not a biography, and I still finish up with a strong affection for the real queen, as it seems so possible she could be just like the one in the book.  And then I read it again.