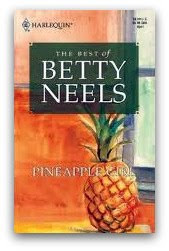 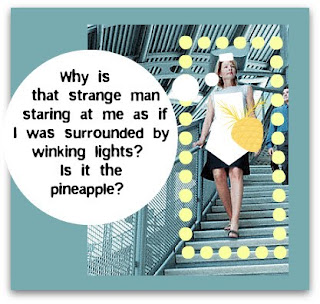 I'd like to see a show of hands for all Bettys that found this title wonderfully unforgettable but also found this novel a bit of a let-down...I remember finding it in a pile of used books and seizing on my copy with a "The Great Betty had a 'Pineapple Girl' in her line-up?  Eureka!" and being so excited to read it.

And I'm not saying it was a bad read necessarily but, for this Betty, it didn't live up to its originality promised on the cover page.
But, as with all Betty-books, there is still plenty to love.
Love and lardy cakes!
Betty Keira


Eloise Bennet - tall, shapely, nutbrown hair. Plainish as to face...'her nose was just a nose' (why is that a bad thing?)......she works the night shift at St. Goth's.
While making her rounds one evening, a patient presents her with a pineapple - rather in the manner of a magician pulling a rabbit out of a hat. Frankly, it's a good thing Eloise gets the pineapple. Why? Because that pineapple is the one thing that makes this Neels stand out - in an otherwise less than memorable book.

While racing down the stairs at St. Goth's, Eloise sees a strange man staring at her - as though she was surrounded by winking lights or something. Up goes her chin and Eloise becomes Pineapple Girl when she misses the final stair and takes a header - thus dropping the pineapple which rolls across the floor and is dented on the stranger's expensive shoe. I'm sure there were some quick pleas for the earth to open up and swallow her - but no such luck - girlfriend is hoisted to her feet and dusted off by the stranger and Sir Arthur Newman. Great first impression. Great.
Eloise aka Pineapple Girl, rides her ancient bicycle home, through the London streets - and drops into bed - to try and sleep through the day. 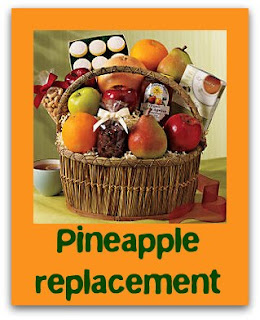 Mum brings her tea in bed and asks about the pineapple. Was it a special pineapple? Why? asks Eloise...because a large Fortnum and Mason basket of fruit has magically appeared, addressed to...the Pineapple Girl! Handsome stranger has sent a basket - but not his name, so there is no way to say thank you and she'd really sort of rather not...

Mevrouw Deborah Pringle comes to visit...she just had a rather vague 'procedure' and needs a nurse to come back to Holland with her for a couple of weeks. Mevrouw Pringle is a charming old friend of Mrs. Bennett's - not only does she get Eloise to agree to come to Holland, she also arranges for Mrs. Bennett to go stay with Mrs. Plunkett back in Eddlescombe.
Mevrouw Pringle confides in Eloise that she has inoperable cancer - and that she has six months to live. Editor's note: Anyone familiar with doctors in Neeldom will immediately suspect that 'six months to live' is a bald faced lie...which it is.
Mevrouw Pringle only has weeks to live - and no one is going to tell her - especially not her doctor - who turns out to be the handsome stranger who sent the healthy fruit basket. Doctor Timon van Zeilst.
And now we get to the interaction between Eloise and the RDD. I wish I could say I enjoyed it. But it leaves me a little meh. Timon is dating a small, willowy, vicious blonde named Liske. The kind who wears silver lamé suits with jangly gold bracelets. Yuk. The man has no taste. Of course he's now in love with Eloise - but besides the occasional kiss he is astoundingly reticent about his feelings. A little openness and this could have been a short story. But I digress.
Mevrouw Pringle is dying to have a dinner party (get it? I slay myself...). Too bad the only 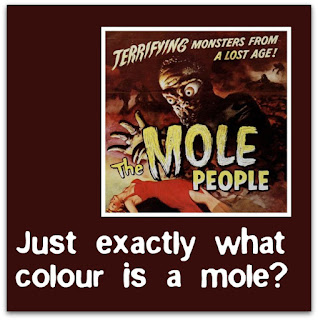 fancy dress Eloise has is a slightly elderly velvet dress the colour of a mole. Timon will bring Liske of course. Let him bring a dozen Liske's...she could care less. The Pringles son is coming - there will be someone for her. Yes, he's a head shorter than her and balding to boot. He is also the type of man who would poke around the kitchen to see if his wife cleaned the saucepans properly. In spite of his mother being terminally ill, Pieter only ever thinks of himself. Let's ignore him. He's really not a player. Meanwhile, back in Eddlescombe, Mrs. Bennett is being squired around the village by Mr. Jack Plunkett. Why bring that up? You'll see.
Mevrouw Pringle starts going downhill fast...really fast. In fact, she dies within only 2 or 3 weeks of returning to Holland. Eloise calls her mum - who says that she'll be coming to the funeral...Jack will drive her there and take both of them back. Mrs. Bennett and Jack are in fact, engaged and plan on marrying shortly. Love must be in the air - because it only takes a page or two for Eloise to realize she's in love with Timon. Rather hopelessly. She's plain...he's dating Vicious Liske and....he's stinking rich! Eloise's heart drops to her shoes when she sees his home for the first time - it's so grand. He is soooo obviously beyond her reach...besides, he's going to marry Viscous Liske, right? Liske is busy throwing "keep your hands off my property" looks at her - so Timon must be planning on marrying her, right? Who knows? He's certainly not saying.
Now that Mevrouw Pringle is gone, it's time to go back to London and the sad little flat behind the Imperial War Museum. It's time for Eloise to go back, Mum will be going to Eddlescombe to marry Jack. Eloise volunteers to finish up the packing in London then move into the Nurses Home at the hospital. She spends some time in fruitless daydreaming - yes, she's dreaming of Timon - probably a Liske-less Timon. Guess who is leaning on her doorbell while she's trying to get some much needed sleep? It's Timon! He would like her to come back to Holland with him and spend a couple of weeks cheering up Cor Pringle. 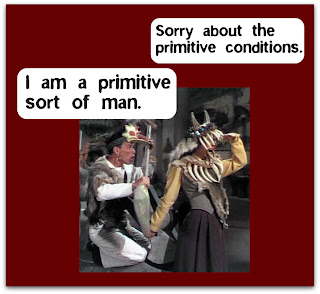 Her: Dang...oh, well...how about some breakfast? Sorry about the primitive conditions.
Him: I am a primitive man.
Really? We've had a glimpse of his grand house - the one with mulberry pink ceilings. That may not be quite our taste, but primitive it is not.
Eloise balks at going - how can she leave her job? She's got no more holiday leave. What about a secure future?
Him: If you were allowed to leave at a moments notice, would you come?
Her: Yes.
So, leave she does. Timon and Sir Arthur conspire together to bamboozle the Nursing Superintendent into letting Eloise go at a moments notice. In spite of the tearing hurry, Timon plans a side trip to Eddlescombe. Which gives Eloise time to stick her foot in her mouth.
Her: I thought you and Liske were getting married.
Him: You may think what you wish.
Aargh. More of that unbounded reticence. Even when Eloise tries to apologize, Timon is downright rude.
Him: Putting out feelers? That will get you nowhere with me.
Aargh. Double Aargh.
Eloise is a natural at cheering up the grieving Cor Pringle. She does get to see a little more of Timon, but that is a bittersweet treat. Especially when he hosts a dinner party and invites Vicious Liske. Dinner is delicious, but a willowy blonde like Vicious Liske doesn't eat. She does, however make thinly veiled insults while looking at Eloise - I should hate to get fat.
You can't answer rudeness like that - so Eloise doesn't, in fact she opts for seconds. You go, girlfriend!
After a visit to Timon's sister, Eloise just has to go fishing for information again - despite the fact that her earlier fishing expeditions have netted her exactly no fish.
Her: I thought you might have invited Vicious Liske since you're going to marry her.
Him: Am I? Would you like to see me married to Liske?
Her: As long as you're happy.
Him: With half a dozen kids? I'm not sure Vicious Liske would agree to that. I can see that I nearly made a humungous mistake...I'd need to fix that, Pineapple Girl... 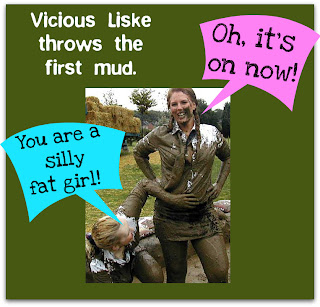 Timon has a date with Vicious Liske...it's a break-up date! But Liske is not going down without some some down and dirty mud-wrestling. She comes to Casa Pringle. It's The Attack of Vicious Liske! Accusations and insults fly with wild abandon....Liske is at her most vicious. She is not fighting for love though, she's fighting for lifestyle. I can already tell that this won't end well.
One more time, one more try - Vicious Liske barges into Timon's house and starts slinging more mud, you are a harpy and designing trollop!...but this time Eloise is not going to take it, so she gives a little back - which is where Timon walks in...just in time to hear her say that Liske is like something that lives under a stone...and then Timon is wept on and lied to by Vicious Liske. AND HE BELIEVES HER!
Aargh. Triple Aargh.
Eloise grabs her coat and leaves...in the teeth of a raging gale - and I can't say I blame her. Of all the insufferable things to happen - having the man you love believe horrible things about you because of your worst enemy. I get it. I'd storm out in the teeth of a gale too. Timon does come after her - they shelter from the storm in an abandoned cottage. Seems like it would be a perfect opportunity for some romantic declarations or at very least, some explanations...but no...Timon would like to talk to Eloise tomorrow. In the meantime he's blathering on about the supposed mud she was slinging at poor Vicious Liske. Instead of waiting for him to show up for a talk the next day, she buys an airline ticket and flies back to England. Eloise has got the itch to get as far away from Timon as possible so she takes a temp job as matron in a boys prep school somewhere in the wilds of Cumbria. Let's wrap it up: 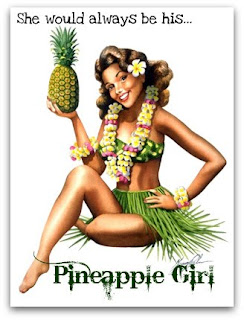 *Eloise goes out on a ledge to save a small boy from suicide.
*Timon drives up just in time to save both of them.
*Timon goes away.
*Eloise gets ready to leave the school and is stopped by Timon.
*Declarations of love, then the second shortest engagement in Neeldom (about 30 minutes - only topped by the engagement in Heidelberg Wedding).
The end. 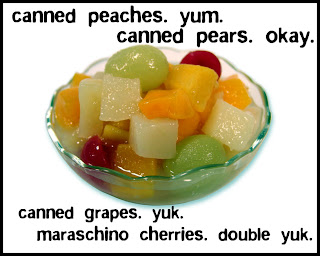 Rating: Pineapple Girl is a bit like a can of fruit cocktail...only the peaches are dependable...sometime the pears are okay...but that's about it. Some of Pineapple Girl is good - but much is only so-so at best. Too much of the book is either canned grapes or maraschino cherries. Both of which should be banned by a unilateral trade agreement. Timon is one of the most frustrating RDD's...he has a few good moments, but all too often he's canned grapes - especially when he is so abominably reticent. He sinks to the level of maraschino cherries when he listens to Liske's lies and believes her over Eloise. The best I can give this is Madeira cake.
Food: Sizzling macaroni cheese, pineapple, rice pudding, porridge showered with sugar. And to top it off, here's a direct quote: "Would she ever forget the salmon mousse, the roast pheasant, the great silver dishes of vegetables, the sauces?" Doesn't get much better than that.
Fashion: angora cap, scarf and gloves to liven up her old coat, elderly velvet dress the colour of a mole, grey jersey, dark green coat and hat with a lighter green dress. Vicious Liske wears a silver lamé suit with gold bangles.
Posted by Keira at 8:35 AM