While The Proposal may be just average (an average Neels - not an average anyone else), this review by Betty Keira is well above the norm.  I love her story about our brother Joe, which must have taken place circa 1990-ish. It's one of those embarrassing situations that befall us all - in one way or another.  My personal equivalent would be the time I discovered that I had inadvertently tucked my uncrushable jersey dress into the top of my tights (while in the loo), just before walking into one of the larger lecture halls in college.  Oops. Thankfully I didn't run into Dr. van der Stevejinck just then - or else history might have taken a drastic turn.  I doubt if my ego could have handled a conversation with any man at that juncture - quailing doesn't even begin to describe how I would have reacted.
-Betty Debbie 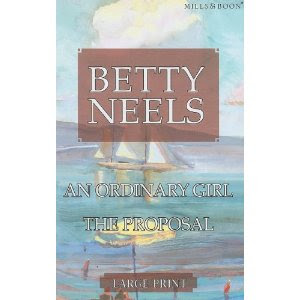 There are a few certainties in the Universe. God is good. The sun will rise in the East. Betty Keira will spare no effort to be as lazy as possible. And a certain Hollywood star will continue her descent into plastic surgery dementia. (Watched one of her films last night. How horribly frog-faced the once-gorgeous lady looked. To quote Better Off Dead: Truly a sight to behold. A man beaten. The once great champ, now, a study in moppishness. No longer the victory hungry stallion we've raced so many times before, but a pathetic, washed up, aged ex-champion. )
But I digress...
This Betty likes to review the short books generally (They're short. What's not to like?) because those stalwart pioneer genes skipped around a bit, landed squarely on Betty Debbie and only glanced off Betty Keira (I"m rubber, you're glue...). So, The Proposal. Let's on to it: 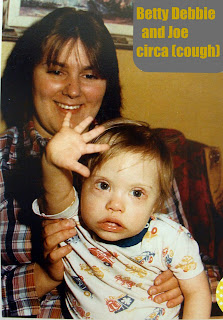 First, we'll begin with a short personal story. When I was 12 or so, my mom sent me to the park with some younger siblings, one of whom was my brother Joe (also 12) who has Down Syndrome. When you've got a family like ours being stared at is rather par for the course but Joe (who is awesome and couldn't hurt a fly if he tried but was big, slobbery, able to lick his eyebrows, etc.) was making some of the mommies and little kids nervous. He, while pretty big, still liked the kiddie slide and whatnot.
One mommy beckoned over a police officer (for why?) who wanted to talk to me. There I was, standing in a growing circle of interested observers, 12, mortified, angry at dumb grownups, both defensive about my brother and wishing him to the Black Hole of Calcutta, and talking to a uniformed officer of the law. Out of nowhere, my big puppy of a brother tackles me to the ground and I'm looking up at blue sky. Kill me now, I think.
It is this that makes me have such affinity for Francesca Haley.
There she is, a bright, vivid girl of 25, dressed in shabby clothes and engaged in the less-than-impressive activity of walking her employer's tiny lapdog. Meeting the man of your dreams in such circumstances would surely make even the bravest woman quail. Meeting him after being knocked to the 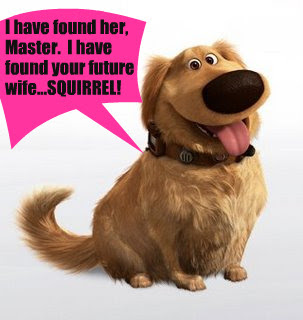 ground by a massive and dirty-pawed one-eyed dog--and being kept there while he rests his paw on your chest--is too much to ask.
She's a bit touchy but being at such a disadvantage excuses great swaths of bad behavior as far as I'm concerned.
She hurries back to the service entrance (Betty Kylene has a service entrance in her new-to-her retro 50s house and I have become converted.) so as not to be late. Lady Mortimer, as The Great Betty so scathingly points out, is the widow of a wholesale textile manufacturer (shudder), which is supposed to disgust me but I'm a fan of meritocracy so can't be too fussed by self-made men who donate so much to charity that they become knighted. And wholesale cloth? I'd probably love to visit that store.
We find out that Francesca tolerates the pitiful wages and demanding conditions of work at Lady Mortimor's because of Lucy--her younger sister is still school-aged, out-spoken and helping a family of kittens live 'clandestinely in a big box under the table'. Francesca tells her sister about the man in the park. 'He thought it was funny, me falling over.' Her pride, while not excessive (Hasn't she spent two years sinking it and biting her tongue to afford a roof over her head?), is a little bruised.
She sees Doctor Renier Pitt-Colwyn (the man in the park and half-Dutch on his mother's side) again and admits to herself that when she doesn't see him she's looking for him. When he shows up at Lady Mortimor's for a consultation she is disappointed that he doesn't acknowledge their acquaintance in any way. Maybe he's distracted by the production Lady Mortimer is putting on for him: Artistic poses, smelling salts (that hoary convention!), and manufactured illness.
That night she confides in L 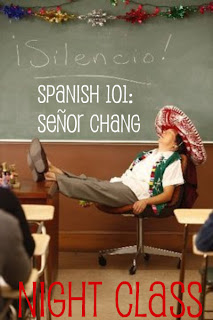 ucy about her disappointment in him. 'Only I thought he was rather nice.' Not a dawning realization but close enough to ruffle the surface of her complacency. 'Maybe I should try night classes,' she mentions off-handedly--excuse enough for her sister to open up a Grade A Can of Butt-Kickery. 'Darling, you must be crazy--you mean sit for two hours learning Spanish or how to upholster a chair? I won't let you.' (Let us not pause to take a poll of Bettys who would be willing to have a few hours to themselves once a week for an education in furniture refurbishment. Few would concede the Indubitable Horror of Night Classes, I think.) The larger point is that Francesca has spent her twenties being a palace eunuch to an encroaching mushroom and wouldn't mind a little social life.
Well, she's not going to get it here.
Renier (whose name, despite the slightly different spelling, I am afraid will always connote Grimaldi chinless-ness) 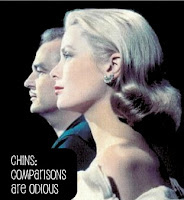 has other plans for her. He suggests that she come to work for the widow of his best friend. Eloise is an actress (Code Red! Code Red! Scramble the jets!) who must leave her small daughter, Peggy, while she tours with a theatre company.
When Francesca hands in her resignation to the deep-bosomed Lady Mortimor, it is truly a petty-minded highlight. 'You have ruined my day. Such ingratitude has cut me to the quick.' Francesca forebore from saying that, for someone of Lady Mortimor's ample, corseted figure, the cut would have to be really deep.
Peggy is a plain and shy child who offers our heroine all kinds of opportunities to show off her domestic skills. Renier catches her kneeling on the kitchen lino shooting marbles, casually toasting bread in the fire, and making bucket loads of tea. Peggy, it should be noted, doesn't miss her mother (a 'love the one you're with' gal if there ever was one) at all but she does miss her deceased father.
Renier, meanwhile, comes and goes as he likes and makes water-muddying visits to Eloise.
Lucy is just happy to be away from Lady Mortimor's and pines (quietly) for a skiing trip that her schoolmates are taking.
But none of this is actually driving the plot anywhere. It's as though The Venerable Neels had forgotten that at at 102 pages, she didn't have time to eddy around in The Mists of Exposition.
To that end, Peggy gets the chicken pox.
During her recovery, the doctor suggests that she travel to her paternal grandparents' house with Francesca and that Lucy board with her school for a week.
The country is lovely and restful and clearly Peggy is getting the love and attention 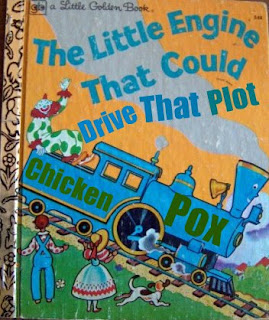 she so desperately craves. 'Hmmm,' thinks Francesca, 'the natural solution to this pickle is to marry off Eloise to Renier.' I warn you that the reminder of this book comes off as an amicably settled custody dispute.
Renier, determined to marry Francesca, makes one more trip to visit Eloise. He also makes a visit to Lucy in London and takes her 'To the Ritz, no less!' 007 would call this little tea party a bit of First Class Reconnaissance.
And then we're back to the countryside to tell Francesca that he has arranged for Peggy to live with her grandparents (and a young nanny) permanently and also for Lucy (who LOVES boarding!) to go on that Swiss alpine adventure with her schoolmates. How officious. How high-handed.
She travels with him to Holland to see Lucy off and then realizes that she doesn't know what comes next. Is being trapped across the Channel with a handsome doctor merely a prelude of Brighton?! No. It's a prelude to proposals, kissing, and an unexpected visit to his mother.
The End 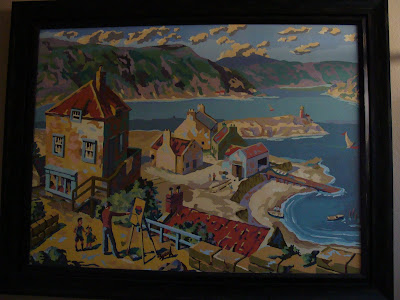 Rating: Former President Dwight D. Eisenhower was a noted fan of paint-by-numbers pictures. I appreciate their kitschy whimsy and bought a couple of them myself a few years ago(see right). They lovingly adorn the children's bathroom. But that's what they are. Children's bathroom art. The Proposal struck me as a bit of the same--safe, tidy, neat, nice and very between the lines. It always comes attached to another book because of it's length which is probably good as it doesn't represent the canon with vigorous bodacity--though the protagonists are wonderful people that you root for the whole time. Anyway, it is not to say that this book doesn't have it's high points. It does. And in a longer book all the space she wastes getting us from Room A to Room B wouldn't stick out so much. Making Sure of Sarah, a similarly short offering, is punchy and sweet and uses every inch of the pages allotted to it. And maybe comparisons really are odious as The Proposal wasn't all that bad...it just wasn't all that good. Treacle Tart for this one.


Food:McDonald's (I almost had a coronary when I read that!), crumpets dripping with butter, baked salmon with a pastry crust, Marmite, and chops that taste like sawdust in her mouth

Fashion: An elderly Burberry, Lady Mortimor's velvet housecoat with gossamer undies, an old but elegant brown jacket and skirt
Posted by Betty Debbie at 8:00 AM