I sort of wonder whether The Great Betty penned Heaven is Gentle directly after a holiday in Scotland?  A holiday wherein the weather played a dismal and dampening part. Frankly, Scotland does not fare well in this book.  Not well at all.  The Founding Bettys have two sisters who, with their families, are currently vacationing in Florida.  Along with Tropical Storm Debby. The oldest nephew of the bunch (age 15) has posted some of his grumblings on Facebook.  I imagine that if he were to pen a memoir of his life right now, Florida would be getting a bad name, weather-wise.

On a personal note, I'd like to mention that today I'll be celebrating 32 years of wedded bliss with Dr. van der Stevejinck.

Love and Lardy Cakes,
Betty Debbie (no relation to the tropical storm) 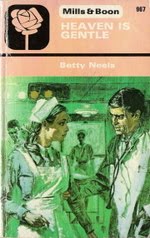 Heaven is Gentle begins with such a cute premise that it makes what follows all the more disappointing. Professor Christian van Duyl and Doctor McOldFart are discussing hiring a nurse to run an experimental asthma clinic for several weeks in the Scottish Highlands. Several names on the list are discarded simply because they sound frivolous and incapable 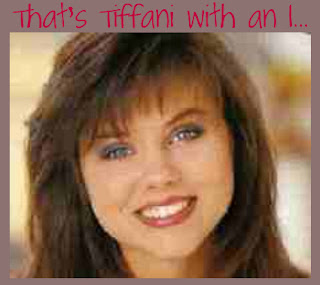 (just as hearing the name Tiffani Amber Thiessen could only possibly conjure the image of Tiffany Amber Thiessen) until they reach the name Eliza Proudfoot--surely a battle-ax of a woman, a buxom warrior princess fit for managing Beta-male asthmatics.
Er...for men of science they make some pretty silly suppositions as Eliza, though 28 and the capable Ward Sister of Men's Medical at St. Anne's, is small, shapely, blonde and has men falling over themselves for the chance of having their proposals turned down by her.
Now let's skip to the bit where they meet. She's driven herself up in a rattle-trap of a Fiat over roads that closely resemble a pony track, it's sheeting rain and the 'lodge' is forbidding. Knock, knock, knock on the door. "Hey, it's raining down my back out here...why are you standing there with a moronic look on your face?"
Christian is surprised and initially (in the first 30 minutes or so) disposed to find the whole thing funny. They were expecting Boadice 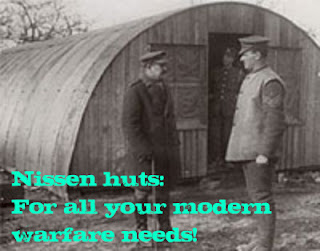 a and they got Helen of Troy. More fool them.
Eliza isn't very impressed with the place. Someone has written 'dust me' in the layers of grime and dirt on the mirror, her asthmatics live in a converted WWII Nissen hut (actually quite cozy but there's no escaping the sardine can comparisons), nobody seems at all convinced that she's good at her job and if only Christian would wipe that nasty, sneering look off his face she could get down to brass tacks.
Scotland (the Other Woman in this phase of the book) does not sell herself as anything pleasant or vacation-worthy. I love grotty weather, myself, but this seemed particularly dour.
Christian, in between being very nasty (To him, her presence is not funny anymore. He's attracted to the Fair Eliza and terrified.), asks the men servants to make her a good tea everyday. He probably tells himself that it (his consideration) is nothing.
Eliza, for her part, charmingly sets to making the Scots wilderness a home. She adopts a pregnant cat--over whose delivery Christian and her call a 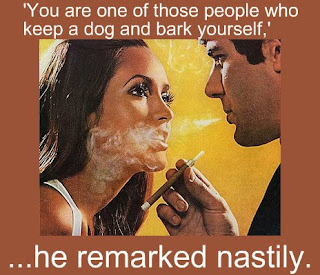 truce--and settles into her allegedly comfortable cottage. As for the lodge, a housekeeper is found, rugs are beaten, charming smudges of dust are sported. But I wouldn't put it past Eliza to have done this as an elaborate ruse for getting into Christian's room to look at his picture of this 'high-minded' woman he's engaged to.
What?! He's engaged?
That's right. Doctor McOldFart tells Eliza that Christian is gettin' hitched and it isn't until she's 'cleaning' his room (and holding the picture of Estella which Christian catches her at) that she realizes that her preferred brand of catnip is a potent mixture of scorn, insults, off-hand consideration and ice.
When Scotland, that saucy minx, sends a storm of Biblical proportions cascading through Eliza's cottage, it's Christian to the rescue! She thrusts a broom into his amused arms and they stem the tide together. At last! A half hour of mellow dialog (wherein he discloses that his hometown was once the site of the Hanseatic Empire and a Summer residence of Charlemagne while she discloses the precise GPS coordinates to her parent's Regency house) finds them in uncharacteristic charity with one another. I think this calls for a tortured and grudging kiss...
Because of that kiss, Christian probably feels angry at himself and a little guilty (though only a little) so, naturally, she has earned his icy disdain. Which introduces a little episode I like to call, Why Did You Hike Up the Mountain Alone You Barking Idiot? A Storm Was Coming and You Didn't Tell Anyone? Also, You Had Been Told Not To--Which Seemed A Reasonable Request in the Scottish Highlands in Winter. Why? Why? Why? 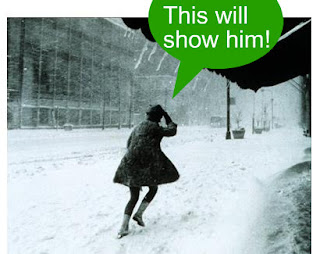 I have little patience with Little Miss You Can't Tell Me What to Do. Still, he isn't horrible to her and she is quite sporting. This constitutes progress. Take your pitiful crumbs, be grateful and don't ask for seconds.
Eliza toys with the idea of taking Christian away from the frigid cardboard figure of his fiancee'. (Which is a little presumptuous and mean if you think about it. She can tell from a single photo that Estelle deserves her contempt? Harsh.)
On a trip into the bustling shopping town of Ullapool she is pestered by a rat-faced man and hauled across the coals by Christian for it. Tears. Apologies. Grudging admission of her attractiveness wrung from him. Around and around we go...
As the end of the asthmatic experiment looms, Christian wonders what Eliza will do with the kittens and offers to take them. 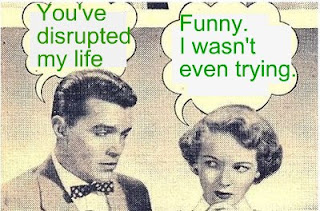 She: Oh really? I thought that Estelle would probably drown them in a lake, as like as not.
He: No. She'll have to like it or lump it.
She: She sounds like a crushing bore!
Yeah, that last bit was real. Eliza is playing some dirty pool.
But the good news is that as they leave Scotland behind, some of The Great Betty's usual awesomeness begins to shine.
In a wayside inn on their last day together, he calls her into the coffee room for some postmortems which I won't spoil. Sufficient to say, he cowers behind glasses, lists her attributes (A Scout is loyal, helpful, friendly, courteous...), tells her he's glad she's leaving and gets one of the best tongue lashings in all of Neelsdom.
Editorial Note: The Venerable Neels can be a little parsimonious with her showdowns. Mercy and forgiveness for all sort of evils flow freely. Heaven is Gentle is a different kettle of fish and, if I've been hard on this book, I genuinely love this part.
Christian is not so chastened that he doesn't kiss the tar out of her anyway.
Since this is only page 124, you know we have to have a medical emergency to bridge the gap between meet-cute, exposition and the glorious end.
Doctor McOldFart is chosen to play the part of deathly-ill romantic facilitator. His asthma attack brings Christian and Eliza together. But none of it is very interesting until she takes Doctor McOldFart to Holland (to visit Christian and work on that asthma study).
Let's look inside the brain of our fair maiden: 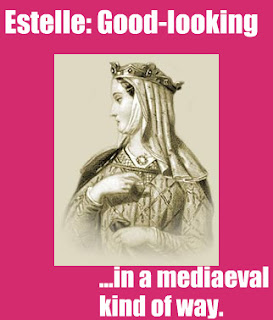 A word about Estelle: I don't hate her. She doesn't want any more pets. She treats Eliza like a nurse. She has salt-cellars for bosoms. (Thank you, Betty!) She wants to run the house her own way when she gets married (instead of her future mother-in-law). She kisses another man during her engagement--hey, wait. Erm...didn't Christian? Her future MIL is cheer-leading the opposition. She and he are incompatible but she's not beneath contempt.
It isn't long before Christian finally (FINALLY) decides to cut bait with Estelle. (Champagne all around!) Estelle, for her part is inching closer to a certain Doctor HandyLips (and his interest in Roman ruins).
Christian makes some earnest attempts at wooing, is cute-put-out when she can't come to dinner with him, defends her to Estelle ("I like small women..." ) and turns himself into quite a likable fellow.
It only wants Eliza catching Estelle and Doctor HandyLips clinching in the shrubbery for gaskets to be blown to kingdom come. Engagements are broken at last.
Christian wastes no time getting Eliza alone. Come into the study...and I will ask you to marry me in a manner which you will never forget as long as you live.
The End

Rating: Heaven is Gentle is a head scratcher. I honestly almost loathe the beginning. Scotland is sodden and dire and bleak--even when it's not raining it lays there like a damp blanket. Christian and Eliza's relationship borders on cruel. Still, here and there I find some flashes of genius. ('Dust me') The middle is middling--Christian's mood is described too often as sneering and icy but we're making progress. The end is smashing. Love, love, love it. Twenty pages from the finale, Betty tells us that they went to lunch together and were 'taking with the enthusiasm of two people who have discovered each other for the first time'. That's when it struck me--All the rest of it was written not as a love story but as the Anatomy of a Bad Break-up. Only when Estelle the Inoffensive seems poised to leave him does Christian settle down to wooing in Fair Eliza in earnest. The prelude to that was merely a dissection of his inner turmoil at being attracted to Eliza and attached to Estelle. I'm going to give this the cheese board because:
But again, the second half is pretty good and the end is great. (Boeuf en croute great.) Read it from his perspective (extricating himself from the wrong girl) and you'll like it quite well. I totally get why those that like it do (it has some very charming bits), I just wasn't that Betty.

Food: Hot soup and sausage rolls, saddle of lamb, apricot upside-down pudding, lovely macaroni and cheese and a cherry cake (which both repels me on the matter of cooked fruit and attracts me because I love cherries).

Fashion: To Scotland she packs thick sweaters and slacks, a long cloak, old anorak, an old rose mohair skirt and cashmere top. She wears Wellington boots and knitted gloves to tramp about the countryside. Our hero rescues Eliza in a great socking sheepskin jacket. She also owns a high-necked brown jersey. Also, much hay is made of the fact that she doesn't travel with an evening dress to Holland.
Posted by Betty Debbie at 8:00 AM