The Little Dragon has a case of seriously hidden identity.  Our prince is pretending to be a pauper:

Coming to America (1988)
Akeem Joffer, the prince and heir to the throne of the fictitious African country Zamunda, is discontented with being pampered all his life. The final straw comes when his parents, King Jaffe and Queen Aeoleon, present him with a bride-to-be he has never met before, trained to mindlessly obey his every command. Akeem concocts a plan to travel to America to find a wife he can both love and respect and who accepts him for himself, not his status. He and his friend, Semmi arrive in, New York City, because according to Akeem "What better place to find a queen than the city of Queens?" They rent an apartment in the neighborhood of Jamaica and begin working at a local restaurant called McDowell's (restaurateur Cleo McDowell's attempt to copy McDonald's), passing themselves off as foreign students...
*So this one is R-rated and I really don't recommend it in it's unedited form (Heck, I wouldn't even know what I was recommending!) but this shows up in endless cable programming often enough that I'll give it a pass and tell you to catch it there.

Hilltop Tryst has several visits to grand hotels.  Betty Debbie remembered with fondness a movie with a last, desperate trip to one such: 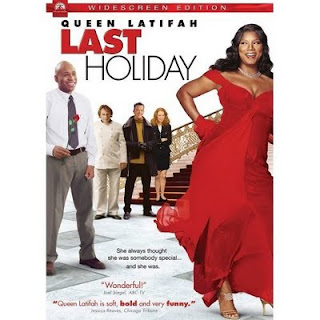 Beatrice may not have a fatal disease but if you substitute the dreaded Colin...
Gosh, I love Queen Latifah.  Gosh, I love LL Cool J.
Robert Ebert wrote: The movie "takes advantage of the great good nature and warmth of Queen Latifah, and uses it to transform a creaky old formula into a comedy that is just plain lovable. To describe the plot is to miss the point, because this plot could have been made into countless movies not as funny and charming as this one ... All depends on the Queen, who has been known to go over the top on occasion, but in this film finds all the right notes and dances to them delightfully. It is good to attend to important cinema like Syriana and Munich, but on occasion we must be open to movies that have more modest ambitions: They only want to amuse us, warm us, and make us feel good. Last Holiday plays like a hug.
That's just how I feel about Betty Neels books.
Posted by Keira at 5:00 AM